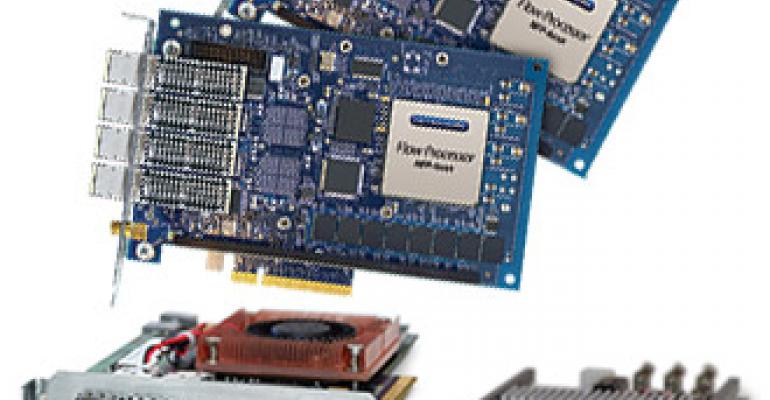 Networking solutions provider Netronome has launched a new platform architecture to augment virtual switch implementations with hardware acceleration NICs in standard servers for software defined networks (SDN) and network functions virtualization (NFV) designs. The new products include a suite of FlowNIC PCIe Gen3 cards that scale up to 200 Gbps, along with a new FlowEnvironment software package that provides standards-based APIs and configuration protocols for virtual switch offload and acceleration.

“Netronome solves the scalability problem of virtual switch implementations in the intelligent network locations where the highest throughput and I/O densities are required, while maintaining the rapid evolution of a software-based edge,” said Niel Viljoen, founder and CEO, of Netronome. “With broad applicability to any virtualized server, the new products are optimized for use in servers running network and security applications, such as SDN middleboxes, SDN gateways and NFV appliances.”

“NTT Communications has been at the forefront of advancing SDN technologies with commercial use for our cloud computing, datacenter and network services for many years,” said Mr. Yukio Ito, director, member of the board, and senior vice president of service infrastructure at NTT Communications. “We’re evaluating Netronome’s solution of processors, software and NICs and expect to use them to extend our SDN offering into the Cloud-VPN Gateway with close collaboration with NTT Innovation Institute, Inc.”

FlowEnvironment software from Netronome features more than a 20 times  increase to virtual switching performance and significantly increases the number of virtual machine instances available per server. The FlowEnvironment includes standards-compliant support for Open vSwitch (OVS) 2.0, OpenFlow 1.4, Intel DPDK, and network virtualization protocols such as NV-GRE and VXLAN. The production-ready software provides standard APIs and is fully supported across Netronome’s FlowProcessors.

“Operational SDN and NFV environments need hardware to be effective – it’s not just about software. Netronome is innovating in the data plane by integrating key SDN, OpenFlow, and NFV functionality into the design of their new processors," said Michael Howard, principal analyst at Infonetics Research. "Service providers will want to examine the possibilities of using equipment with this silicon for their SDN and NFV deployments.”