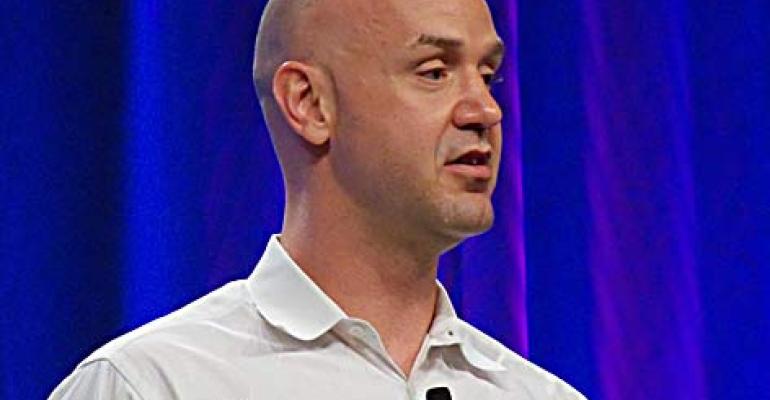 Scott Noteboom, who has headed data center teams at Apple and Yahoo, will be the keynote speaker for the Data Center World Global Conference 2014, which is being held April 28 to May 2 in Las Vegas.

Scott Noteboom, the founder and CEO of LitBit, will be the keynote speaker at the Data Center World Global Conference in Las Vegas from April 29 to March 4. (Photo: Rich Miller)

Scott Noteboom is watching several horizons. The veteran executive, who has worked at Yahoo and Apple, is constantly scouting new horizons in data center technology. He also is focused on the new geographic horizons for the Internet.

Noteboom will bring these two themes together in the keynote for the Data Center World Global Conference 2014, which is being held April 28 to May 2 in Las Vegas. Noteboom will present “The Impending Needs and Dynamics of Emerging Market Data Centers – Now to 2025,” which will address the future of the global data center market.

"With massive emerging market growth occurring between now and 2025, the timing is right to reflect, disrupt and reinvent current gaps that make development in these parts of the world difficult," said Noteboom.

Noteboom is immersed in this topic in his new startup, called LitBit, which is developing a new hardware/software platform to serve as the heart of a "data factory" deployment model.

LitBit is still in stealth mode, much as Noteboom had been since late 2011, when he moved from Yahoo to a leadership position on the Apple data center team. Previously a fixture on the data center conference circuit, Noteboom assumed a low profile during his tenure at Apple, which is famously secretive about its data center operations.

"It's good to be back," said Noteboom. "I went silent for a while, which is our charter at Apple."

While he's not likely to offer many specifics on Apple or LitBit, Noteboom has lots to say on the coming transformation of the global data center market.

"The next 15 years will see a shift in growth for data center markets," he said. "This has really been a U.S.-driven industry. Building something optimal relies on a small community of U.S.-centric industry expertise."

That's about to change, driven by three factors: population, performance and privacy.

China and India, with populations of 1.3 billion and 1.2 billion, respectively, have become the fastest-growing regions for Internet usage. Internet infrastructure in these countries lags the standards seen in the U.S., resulting in slower performance. As applications become more interactive, it will become more difficult to serve these users from facilities in the U.S.

Noteboom says the average data delivery time within the U.S. is 58 milliseconds, compared to 108 milliseconds for users in China.

"The speed of light becomes an inhibitor," said Noteboom. "The only way to solve that is to locate the core data centers in China."

The gap between data center construction techniques in the U.S. and China presents a challenge.

"We believe Chinese data centers are 40 percent less efficient than the leading edge data centers," said Noteboom, who said a major problem is building facilities in the right location. "There's honestly about 25 people that are really good at site selection and they're all in the U.S."

LitBit's platform will be optimized for emerging markets, while allowing data centers of the future to be continuously reconfigurable and upgradeable. Noteboom says the solution will be found in lean and flexible construction methodology that separate real estate and technology.

"The coming years will drive the increased simplification of the design/construction process that emerging markets need, while disaggregating that traditional process from the core technologies that need to advance further and faster for the future," said Noteboom.

Scott Noteboom has worked on many of the data center industry's most iconic projects. He served as senior director for AboveNet from 200 to 2005, when he moved to the data center team at Yahoo (2005-2011) and then Apple.

Noteboom is a student of history and industry, and his presentation at Data Center World Global Conference 2014 will review the history of modern data center development over the years, and how designs have evolved - and in some cases, not evolved very much.

The spring conference is scheduled for April 28-May 2, 2014 at the Mirage Resort in Las Vegas, with an agenda designed for data center executives and decision makers. Some of this year’s conference panels include: