A large crack has been detected in a dam on the Columbia River that is the largest source of hydro-electric power for a major cluster of data centers in Quincy, Washington. 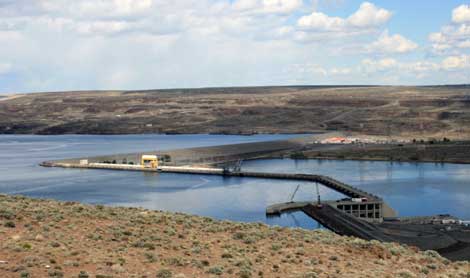 A crack has been found in the Wanapum Dame (pictured above) in Grant County, Washington, which supports the utility power supply to a major cluster of data centers in central Washington. (Photo by williamborg via Wikimedia Commons)

A large crack has been detected in a dam on the Columbia River that is the largest source of hydro-electric power for a major cluster of data centers in Quincy, Washington. Officials at the Grant County Public Utility District say the crack does not present any immediate risk to public safety or local power supply, but have begun lowering the water level to reduce pressure on the damaged area of the structure.

The Wanapum Dam generates more than 1,000 megawatts of electricity for the Grant County PUD, the utility that provides electricity to major data centers operated by Microsoft, Yahoo, Dell, Sabey Data Centers and Vantage Data Centers. The dam is about 25 miles south of Quincy in a rural location, and represents no flooding risk to any of the data center facilities.

On Tuesday, dam officials noticed an irregular bowing of the dam near a section of a spillgate pier along the mile-long structure. Divers examined the area Thursday and discovered a two-inch wide crack running horizontally, located about 75 feet below the water’s surface. It runs the entire width of the 65-foot-wide pier.

The risk of a failure of the dam is high enough that the county has initiated an emergency plan. To relieve pressure on the dam, the water level is being lowered by 20 feet.

The dam is currently generating enough electricity, along with the PUD’s other power plants, to cover county demand for electricity, local officials told the Wenatchee World. If generation is reduced at the dam, the Grant PUD will buy the power it needs on the regional wholesale power market, and customers should not see any interruption in service, the utility said.

“Catastrophic failure is very unlikely,” PUD assistant general manager Chuck Berry told the Wenatchee paper on Friday. “We’re generating now. We’re not anticipating a huge amount of water coming. In a worst-case scenario and that piece of the spillway would fail, the flows that would move into the river below would not exceed the regular flow of the Columbia River."

Quincy, a town of 6,000 residents in central Washington state whose cheap power and cool climate has attracted major data center. The dams on the Columbia River allow the Grant County PUD to offer hydroelectric power at rates below 3 cents per kilowatt hour, rates far cheaper than most major data center markets. The cool climate in Quincy allows data centers tp use outside air to cool servers. Quincy is the home to major cloud facilities for Microsoft and Yahoo that are among the most efficient data centers in the world.