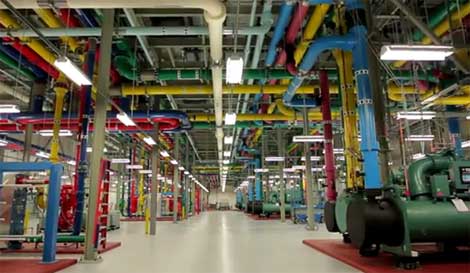 A look inside the cooling plant at a Google data center. Google invested $7.3 billion in data center infrastructure in 2013. (Photo: Google).

Google Spent $7.3 Billion on its Data Centers in 2013 - Google continues to pump big bucks into its data center operations, investing a massive $7.35 billion in capital expenditures in its Internet infrastructure during 2013. The spending is driven by a massive expansion of Google’s global data center network, which represents perhaps the largest construction effort in the history of the data center industry.

Facebook Rethinks How It Builds Data Centers: Legos or IKEA? - Facebook is working on ways to streamline its data center construction, but it hasn’t yet decided whether to go the Lego route or try the IKEA approach. The company wants to create a repeatable design for a “Rapid Deployment Data Center” that can work anywhere in the world. The goal is to effectively cut construction time in half.

AMD, Dell See Opportunity in ARM Server Market - Just two months after the best-known ARM server vendor abruptly closed its doors, AMD and Dell are seeking to establish leadership in this emerging segment of the server market. The announcements give fresh momentum to the effort to adopt cellphone chips for the server market.

Bitcoin Miners Building 10 Megawatt Data Center in Sweden - Facebook has new neighbors in Sweden, and they’re building Bitcoin’s version of the Death Star – a 10 megawatt data center filled with high-powered computers mining for cryptocurrency. Bitcoin mining equipment company KnC Miner has begun construction on its new facility in Boden, about 10 miles down the road from Facebook’s server farm in Lulea.