Advocates of open networking are seeking to bring about a future in which commodity networking hardware will be easily managed by software, all of which will be open. They say the effort is moving ahead "very quickly." 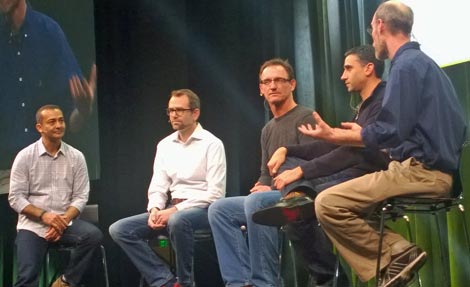 SAN JOSE, Calif. – If software is going to eat the world, it must first nibble on networking. And the networking community seems to have a large appetite for change.

That was the message last week at the annual summit of the Open Compute Project (OCP), which has taken a leading role in developing an open approach to networking. It’s one of several efforts to bring about a future in which commodity networking hardware will be easily managed by software, all of which will be open.

Last year the OCP said it would begin building network switches. Within six months, Broadcom, Intel and Mellanox each submitted specifications for a top-of-rack switch. At last week's event,

"Opening up the network has happened very quickly," said Frank Frankovsky, President and Chairman of the Open Compute Project. "Network engineers are a passionate and extremely smart group of people. They want to do engineering. The black box of today takes that away from them. We decided to crack open that black box. The passion in that group just overwhelms me."

The networking sector has been dominated by a handful of large vendors offering routers and switches managed by proprietary software. The last several years have seen progress in the development of software to support open networking, especially in the use of software-defined networking (SDN) that allows network equipment to be managed by external devices such as commodity servers.

This shift holds the promise of making it cheaper and easier to build and manage large-scale networks. But as this transition moves ahead, the incumbent vendors won’t yield ground easily. Cisco Systems has unveiled its own approach to programming the network, known as Application Centric Infrastructure.

Open Compute is one of several community-driven efforts to bring change to the network, along with the Open Networking Foundation and the OpenDaylight initiative.

Several panels at the Open Compute Summit illustrated the enthusiasm for new approaches to networking. In the first, two industry pioneers assessed the state of the network.

“We believe deeply that the same structural change that has happened in computing will happen in networking,” said Marc Andreessen, president and founder of the venture capital firm Andreessen Horowitz, which has backed several startups focusing on software-defined networking. “We think the great rollout of software defined networking is just starting.”

“I think it makes a lot of sense to standardize networking hardware,” said Andy Bechtolsheim, founder and chairman of Arista Networks. “Building the software stack is more difficult than the hardware.”

Bechtolsheim, who is on the Open Compute board of directors, said the project can innovate more quickly than traditional channels for developing standards, like the IEEE.

"I like the Open Compute approach to standardization," he said. "There’s a lot of innovation potential that needs a venue to reach the public. Until Open Compute, there was no such venue."

A session featuring networking executives focused on frustrations with the status quo, and potential paths forward.

“We need the ability to manage switches like we manage servers today," added Dave Maltz, a networking researcher for Microsoft Bing.

"Open Compute is striving to open things up," said JR Rivers, co-founder and CEO of Cumulus Networks. "How do we create ecosystems to fulfill all the goals?"

“We view the industry as though Darwin has already spoken," said Martin Casado of VMware. "We’ve seen the physical network become simpler. We kinda know what the network of the future looks like. As the rest of the world catches on, the question is ‘what’s the right migration path."

"Probably the most inflexible thing in industry is people’s brains," said Casado. "It’s incumbent upon us to develop new solutions that look like what people have used before.

"I’m so optimistic," he added. "There’s a lot of work we have to do. It’s more about education, and I really believe the industry’s going to do the right thing, and we’ll have better networks."