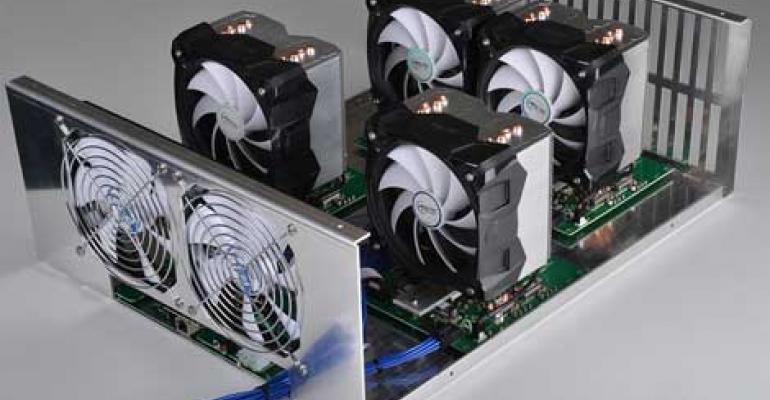 KnC Miner is building Bitcoin's version of the Death Star - a 10 megawatt data center filled with high-powered computers mining for cryptocurrency. The new facility is in Boden, Sweden, just 10 miles down the road from a Facebook data center. 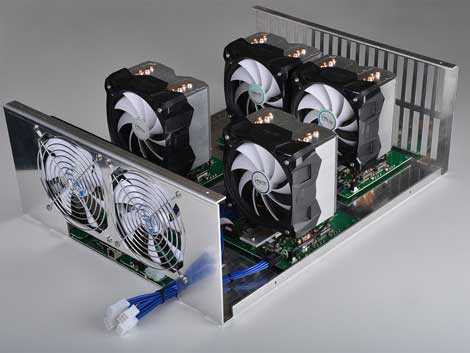 KnC Miner has started work on a 10-megawatt data center in Boden, Sweden, which will be filled with Bitcoin ASIC mining rigs similar to this one. (Photo: KnC)

Facebook has new neighbors in Sweden, and they're building Bitcoin's version of the Death Star - a 10 megawatt data center filled with high-powered computers mining for cryptocurrency.

Bitcoin mining equipment company KnC Miner has begun construction on its new facility in Boden, about 10 miles down the road from Facebook's server farm in Lulea. The data center is being built in a facility previously used as a helicopter hangar for the Swedish armed forces. It will be retrofitted to house thousands of custom Bitcoin mining rigs built by KnC Miner, one of a host of new vendors that has emerged to serve the growing market for Bitcoin hardware.

KnC Miner is based in Stockholm, Sweden and has established a leadership position in Bitcoin mining rigs powered by ASICs (Application Specific Integrated Circuits) to crunch data for creating and tracking bitcoins. The company says it has sold $75 million in hardware since June, with customers in 120 countries.

The new data center marks KnC's entry into cloud mining services. It's the latest in a series of bitcoin companies to announce the establishment of multi-megawatt data centers for Bitcoin mining – the term for using data-crunching computers to earn newly-issued virtually currency. Like hyperscale computing companies such as Facebook, Bitcoin companies are chasing cheap power to improve the profitability of running their power-hungry rigs.

"We searched all over the world for a suitable place to build the first of many of our own mega data centers, and to find the best location lying right here in our home country is fantastic," said Sam Cole, one of the co-founders at KnC Miner. "Our highly advanced technology consumes a lot of energy, so for us it was imminent to find a production site with access to renewable yet stable and safe energy. We have had an incredible amount of support from The Node Pole representatives, local companies and the government here in Boden."

The Node Pole initiative seeks to market Sweden as a destination for data center development, leveraging the region's abundance of stable and competitively priced electricity from renewable energy.

KnC Miner started construction last week, but expects it to be fully operational already within the next few months. Representatives of the Node Pole said that KnC is "already in discussions with local authorities regarding the establishment of even larger facilities in the local area already later this spring."