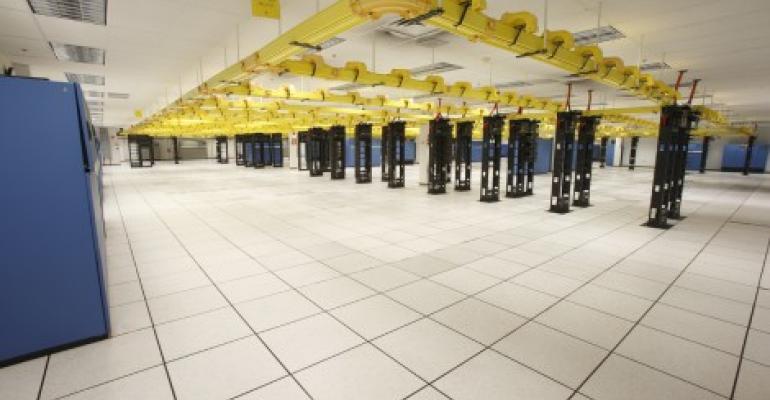 DataSite has entered its third market for its brand of Hybrid Colocation, where customers can pick and choose redundancy levels. The Boise, Idaho data center was formerly a bank, then built by HP to be two state of the art data centers. DataSite believes Boise is an underserved market in need of high end data center environments.

A look at the raised floor space in the east wing of the new DataSite Boise, Idaho facility.

DataSite is taking over a building in Boise that was originally built by the Bank of Idaho back in the 1980s. HP first acquired the site, doubling it in size and running it as a key data center to their operations. Boise was home for HP’s innovation of the laserjet printer, and continues to be a big player in the area.

The data center is 60,000 square feet, which HP ran as two entirely separate data centers. The switch gear, generator, UPS plant and all of the cooling systems are redundant. DataSite saw the site as an opportunity to offer its brand of hybrid colocation. The facility's power capacity is currently 1,650 killowatts, but the company plans to boost that in phases, eventually expanding to four to five megawatts of power to support about 35,000 square feet of raised floor.

“In Boise, we have a unique opportunity,” said Jeff Burges, President of DataSite. “Boise is underserved today. There’s nobody doing colocation in Boise today like we do.”

DataSite's hybrid colo offering provides customers with options in how they provision four key infrastructure components: The main utility (switch gear and utility service), the generator plant, the UPS plant and the cooling plant. This approach was developed to address users that didn’t want to be a colo customer, allowing them the option to own and control the pieces they want, even with their money. It is the same strategy the company employs in its Marietta, Georgia data center. The company also has a site in Orlando, Florida.

“We do hybrid colocation and dedicated,” said Burges. “We melted those two systems together to provider a variety of tier ratings and custom configs. Not only can we approach a customer – we can either gives them, for their entirety or rack, a higher or lower tier rating. This enables them to get the benefits for some of their installation, but not other parts. With redundancy goes cost – the higher the redundancy the higher cost.”

The company looks for what it calls the "Trifecta of Value" in evaluating sites. The three key factors are:

Boise has a growing tech scene. “The quality of technology is there, HP Micron is there, there’s a tech university,” said Burges. “There’s a lot of tech startups. A lot of people call it a mini-Austin.”

The only real environmental risks in Boise are flood risks near the Boise river, but the data center isn’t in a flood zone.  There's also some fire risk due to dry climate. However, most natural disasters leave Boise untouched.

“It’s an N+1 world, but many wish to have more, or less," said Burges, referring to industry parlance for redundancy in key equipment. "We believe it’s an N+1. We market variety, but with most N+1, some buildings just miss ‘tier 3’ by missing an element or so. The end user community looks at those things they look to be most important. The world is a little easier on the colo operators. We see that the end user likes to be able to get that redundancy if they want.

“We will not be skiddish about spreading people out in the building,” said Burges. “It was built in two data centers. We’re combining two into one for very high reliability. There’s plenty of space to build equipment rooms. We can do an entirely built-to-suit with the remaining space. We can do dedicated space. The way HP built out and operated it enables our customer-centric colo better than any of our buildings. “

"High density is here to stay, and this location will offer up to 400-500 watts per square foot," said Rob Wilson, Director of Sales and Marketing, DataSite.

DataSite will refurbish the building over the next 45 days and open for business on April 1. The company has already begun talks on a couple of deals. “Something that’s missing in Boise is the higher end environment, the space for critical load said Wilson. “They’re forced to build their own, so this really opens that market for having that environment.”