State of the Data Center Puts IT in the Spotlight

One in every nine people on earth is an active Facebook user, and mankind created 1.9 trillion GB of data in 2013. The growth of social sites and the proliferation of information are two trends that Emerson Network Power captures in its “State of the Data Center 2013” infographic. These trends have a huge impact on the communications network, IT department and, most importantly, data centers.

In 2011, Emerson Network Power introduced our “State of the Data Center” infographic, a scan of major trends that affect data centers. We also researched the number of outages and the cost of downtime. This infographic provided a baseline for comparing future trends.

We recently completed “State of the Data Center 2013,” which we developed as an infographic that illustrates the facts of the year. To sum up the results in a few words, the global dependence on everything digital is pushing IT to the forefront of the organization. Data centers increasingly are relied upon in areas that were traditionally offline pursuits, and consumers have high expectations of speed and performance. I’ll share trends that support these findings, and I’ll also discuss a significant consequence of IT being in the spotlight. 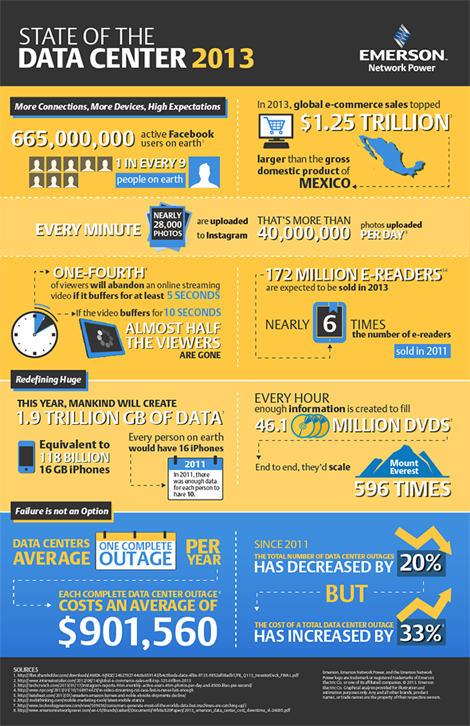 The facts confirm the relentless expansion and acceleration of our society’s digital dependence. For example, global e-commerce spending topped $1.25 trillion in 2013. That’s larger than the gross domestic product of Mexico. Even books are digital. It’s expected that 172 million e-readers were sold in 2013 – nearly six times the number of e-readers sold in 2011.

Online social sharing also grew astronomically between 2011 and 2013. In 2013, 665 million people used Facebook, which, as stated previously, is equivalent to one in every nine people on earth. In comparison, in 2011, there were 500 million users, or one in every 13 people on earth.

While sites such as Facebook and Twitter rely on the written (or typed, more accurately) word, photography and other imagery are seemingly becoming the language of the internet. On Instagram – “a fast, beautiful and fun way to share your life with friends and family,” according to the site – more than 40 million photos are uploaded every day – nearly 28,000 each minute.

Video is also a mainstream medium, with YouTube being in the top five most popular social sites. Video files are huge, which also can make them slow to load, which is not acceptable. One-fourth of viewers will abandon an online streaming video if it buffers for at least five seconds; at 10 seconds, half the viewers are gone. In all respects, online performance must be flawless.

So, how much data does all this digital dependence generate? In 2011, it was 1.2 trillion GB of data; enough for every person in the world to have 10 16-GB iPods. And two years later, it was estimated mankind would create 1.8 trillion GB of data. That’s equivalent to 118 billion of the now more popular 16-GB iPhones, which is enough for every person on earth to have 16 iPhones – that’s three more per person since 2011. Put another way, every hour enough information is created to fill 46.1 million DVDs that if stacked would scale Mount Everest 596 times. Mount Everest stands 29,035 feet above sea level.

Enormous numbers of people are creating huge amounts of internet traffic and adding gigantic amounts of information in a variety of formats – some extremely storage heavy – every second of every day. It’s no wonder IT has become a star. But given the expectation of consumers that the internet will be always-on, fast and simple, it’s a star that can fall hard with the sudden failure of switchgear to the backup generator. Remember last year’s Super Bowl?

The Price of Fame

The infographic illustrates what Emerson Network Power hears every day from our customers and partners, that there is a growing reliance on the data center as an indispensable business asset. And, as data centers become more important, businesses are increasingly aware of the risks and costs of downtime.

While complete outages were down 20 percent, the costs are shooting up - 33 percent since the release of Emerson’s “State of the Data Center 2011” infographic - and businesses are taking steps to avoid those costs. They are investing in their IT systems and infrastructures because the cost of downtime is becoming more and more prohibitive. Businesses average one complete outage every year (compared to 2.5 in 2011) at an average cost of $901,560. That’s a lot of money.

The Show Will Go On

The appetite for everything digital shows no signs of being satiated; the data center will continue to be front and center. So it is indeed a wise strategy to invest in systems and infrastructure that whittle away at the chance of downtime. It will be interesting to see where these trends take us by 2015.