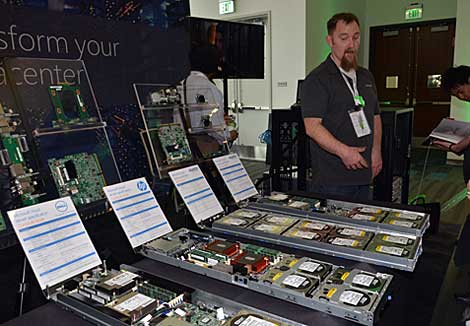 Microsoft joined the Open Compute Project this week, contributing the designs and specs for its cloud servers. A Microsoft engineer walks participants through different interations of the server, with partners such as Dell, HP and Quanta. (Photo by Colleen Miller.)

Microsoft Joins Open Compute Project, Shares its Server Designs - In a dramatic move that illustrates how cloud computing has altered the data center landscape, Microsoft is opening up the server and rack designs that power its vast online platforms and sharing them with the world. Microsoft has joined the Open Compute Project and will be contributing specs and designs for the cloud servers that power Bing, Windows Azure and Office 365.

Facebook: Open Compute Has Saved Us $1.2 Billion - Over the last three years, Facebook has saved more than $1.2 billion by using Open Compute designs to streamline its data centers and servers, the company said today. Those massive gains savings are the result of hundreds of small improvements in design, architecture and process, write large across hundreds of thousands of servers.

Blu-Ray in the Data Center? Facebook Creates 1 Petabyte Rack - Will Blu-Ray disks find a second life in the data center? Facebook has developed a storage system that packs 1 petabyte of data into a single cabinet filled with 10,000 Blu-Ray optical discs. Facebook hopes to put the Blu-Ray storage unit into production by the end of this year, providing “ultra-cold” storage for older photos.

Is Your Data Center Ready for the Polar Vortex?  - This month’s unusual weather pattern has brought frigid air to parts of the U.S. that don’t normally see extreme cold snaps. Not to worry. Many data centers operate just fine in brutally cold weather, and your colleagues from these colder climates have tips on how to adapt.