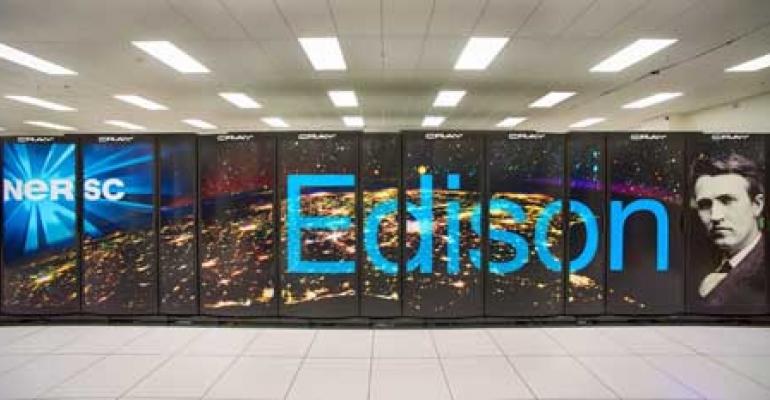 The National Energy Research Scientific Computing (NERSC) Center recently accepted a new flagship Cray XC30 supercomputer, named in honor of inventor Thomas Edison. The Edison supercomputer will be used by about 5,000 researchers to support a broad range of science, from basic energy research to climate science, from biosciences to discovering new materials, exploring high energy physics and even uncovering the very origins of the universe.

“Facilities throughout the Department of Energy are being inundated with data that researchers don’t have the ability to understand, process or analyze sufficiently,” said NERSC Director Sudip Dosanjh. "Historically, NERSC was an exporter of data as scientists ran large-scale simulations and then moved that data to other sites. But with the growth of experimental data coming from other sites, NERSC is now a net importer, taking in a petabyte of data in fields such as biosciences, climate and high-energy physics each month. Edison has been optimized for that: It has a really high-speed interconnect, it has lots of memory bandwidth, lots of memory per node, and it has very high input/output speeds to the file system and disk system.”

The Cray XC30 system is expected to reach almost 2.4 Petaflop/s - which would place it just outside of the top 10 in the semi-annual Top500 rankings of the most powerful supercomputers in the world. Edison boasts 322 terabytes of memory, 124,608 processing cores, 462 terabytes per second of global memory bandwidth, 11 terabytes per second bisection bandwidth, and 7.56 petabytes of disk storage.

Edison will specialize in data analysis, for things like  genome sequencing or molecular screening programs, which involve high throughput computing - which is running large numbers of loosely coupled simulations simultaneously. Such “ensemble computing” requires more memory per node and has typically been relegated to separate computer clusters.

In preparation for its 2015 move into a custom-built data center (the Computational Research and Theory facility), Edison is the first supercomputer at NERSC to rely solely on outside air for cooling. Water is circulated through outdoor cooling towers and back into the system’s internal radiators, which cool air rather than heat it. Fans located between each pair of cabinets in a row pull air in one end; circulate it through a radiator, over the hot components and on to the next set of cabinets before it exits at the row’s end. This side-to-side airflow, or transverse cooling, is more energy efficient than the typical front-to-back flow of most systems.

The dedication ceremony for Edison will be held at the Department of Energy's Lawrence Berkeley National Laboratory on February 5th, during NERSC's 40th anniversary celebrations