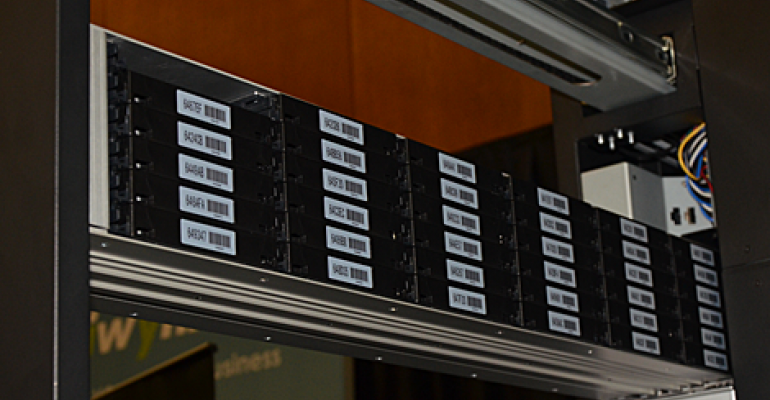 Facebook has developed a storage system that packs 1 petabyte of data into a single cabinet filled with 10,000 Blu-Ray optical discs. The company sees potential for Blu-Ray to lower the cost of cold data storage. 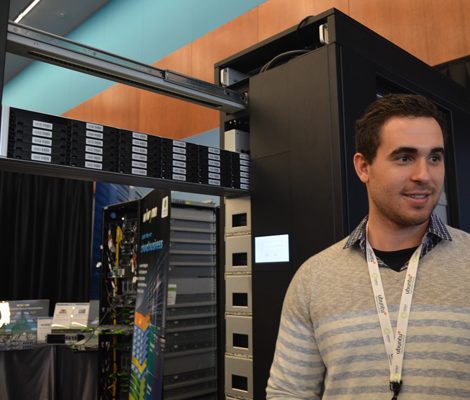 Matthew Niewczas, a hardware test engineer at Facebook, stands by the cold storage unit, where he was explaining the technology of using blue-ray discs to store data. (Photo: Colleen Miller.)

SAN JOSE, Calif. - Will Blu-Ray disks find a second life in the data center? Facebook has developed a storage system that packs 1 petabyte of data into a single cabinet filled with 10,000 Blu-Ray optical discs.

Facebook hopes to put the Blu-Ray storage unit into production by the end of this year, providing "ultra-cold" storage for older photos. The company showed off its prototype this week at the Open Compute Summit. But it's not just a novelty. Over the long term, Facebook believes Blu-Ray has the potential to move beyond its origins in consumer video and became a durable, cost-effective data storage medium.

Blu-Ray is not ideal for primary storage because data can't be retrieved instantly. But it has other selling points, especially cost. Using Blu-Ray disks offers savings of up to 50 percent compared with the hard disks Facebook is using in its newly-completed cold storage facility at its data center in Oregon. The Facebook prototype also uses 80 percent less energy than cold storage racks, since the Blu-Ray cabinet only uses energy when it is writing data during the initial date "burn," and doesn't use energy when it is idle.

Potential for Broader Use - Eventually

"Within five years, this is going to be a new way of storing data, and will make its way into uses that have been reserved for magnetic disks," said Giovanni Coglitore, hardware engineering director at Facebook. "I think it will start creeping into warmer and warmer storage tiers."

Blu-Ray is an optical data storage format created as a high-volume successor to DVDs. The format enjoyed some of its best sales yet during the holiday season, but still holds just 25 percent market share in the home video market, trailing DVD as both formats face a formidable challenge from the rapid growth in streaming video.

Facebook stumbled into its Blu-Ray experiment as part of a broader evaluation of storage options. Facebook is eager to use NAND Flash memory wherever possible to gain benefits in performance and cost. But it soon became clear that the economics of Flash would not allow ubiquitous deployment anytime soon. So the company shifted its focus to optical drives.

In less than six months, the Facebook team built  a prototype using Panasonic discs and a robotic retrieval system similar to those used to retrieve tape from archived storage units. The end result was seven-foot cabinet that's compatible with the Open Rack standard. The rack includes 24 magazines, which each house 36 sealed cartridges, each of which contains 12 Blu-Ray discs. When a disc is needed, the robotics system retrieves the magazine. See this video from the Facebook Engineering team for a demonstration.

Each disc is certified to retain data for 50 years. The system can operate in a wide range of environmental conditions.

"The heat of the jungle and the cold of the arctic do not affect it," said Cogliotore. "You could dump these disks in water and not lose data."

Complement to HDDs, Not an ALternative

For all its potential in cold storage, Blu-Ray won't be a rival to hard disk drives anytime soon. Cogliotore said that additional development could broaden its use cases.

"This is not an alternative," said Cogliotore. "It's complementary. We'll make our coldest (storage) tiers much more financially viable. It's very price attractive and we like the disaggregated nature." 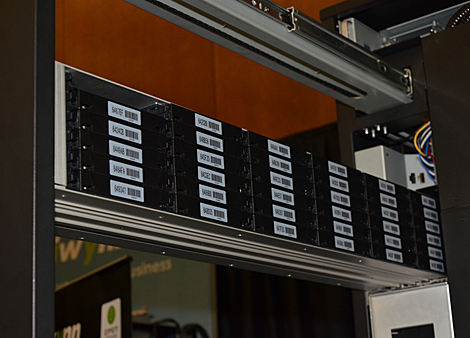