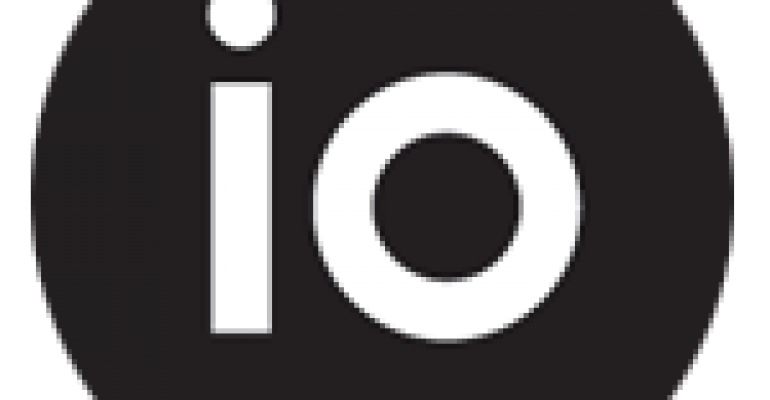 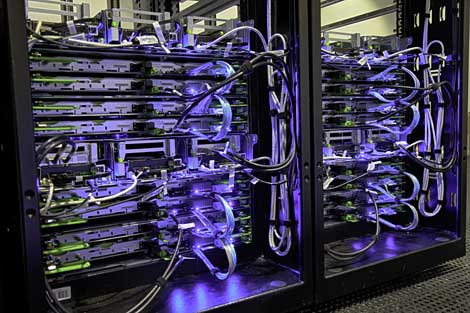 IO has launched IO.Cloud, which runs on Open Compute hardware, pictured above. In this IO.Cloud rack, Open Vault (Knox) storage units are seen above and below the three-wide Winterfell servers. (Photo: IO)

IO is unveiling its new cloud today at the Open Compute Summit in San Jose, where CEO George Slessman will highlight the company’s membership in the Open Compute Project (OCP) in a keynote session. IO will use OCP servers and storage units to power its cloud, and its R&D team will be an “active participant” in the project.

Why enter the increasingly crowded cloud market? IO’s motivation is simple: offering a shorter path to the cloud for the hundreds of enterprise customers housed in its data centers. Rather than moving data across the Internet to public clouds from Amazon or other providers, these customers can now find the IO.Cloud just a cross-connect away.

“The enterprise market is eager for a cloud solution that both addresses security and avoids expensive lock-in to proprietary architecture,” said Slessman. “Our solution achieves both. IO.Cloud is IT that enables rather than constrains, using visibility and software-defined intelligence to spur innovation, drive growth and contribute to business success.”

IO.Cloud will initially be available in the company’s data centers in Phoenix, Arizona and Edison, New Jersey. IO’s cloud will be housed within IO.Anywhere data center modules, pre-fabricated enclosures built in the company’s factory near Phoenix. It will run on the Open Stack cloud software platform, powered by the Winterfell servers and Knox storage sleds developed through the Open Compute Project.

IO says its cloud will tie into those other services, using instrumentation and monitoring to provide data on every level of its customers’ infrastructure and IT operations.

“We have the ability to provide a virtual machine with the PUE next to it,” said IO Chief Innovation Officer Kevin Malik, referring to Power Usage Effectiveness, the leading energy efficiency metric for data centers. “You'll be able to decide which VM to use based on region and real-time PUE and other metrics. It's a whole new world. We can really define what it costs to run a VM."

But by combining these technologies within its pre-fabricated data center modules, IO hopes to demonstrate the merits of standard, repeatable design built atop IO.Anywhere.

IO believes its use of open technology will appeal to enterprise customers seeking transparency in their infrastructure. With a growing number of clouds using Open Stack, it also will be attractive to customers concerned about platform lock-in.

Malik said IO's pricing will be "in line with the biggest players because we're leveraging crowd-sourced hardware.”

In-House R&D as a Differentiator

IO maintains an in-house research and development operation, which sets the company apart from most colocation providers. That allowed IO to do its own customizations of OpenStack, the open source cloud framework.

“We did it all ourselves,” said Malik. “Having an R&D capability in a company like ours is exciting.”

For the IO.Cloud servers and storage, IO has partnered with AMAX, a Fremont, Calif. Company specializing in solutions based on Open Compute designs.

IO was founded in 2007 and has been a pioneer in the emerging market for modular data centers that are built in a factory using repeatable designs and can be shipped to either an IO data center or a customer premises. The company has built two data centers in the Phoenix area, along with facilities in Ohio, New Jersey and Singapore. In addition to its IO.Anywhere modular technology, the company has also developed IO.OS software for managing complex data center infrastructures across multiple sites.