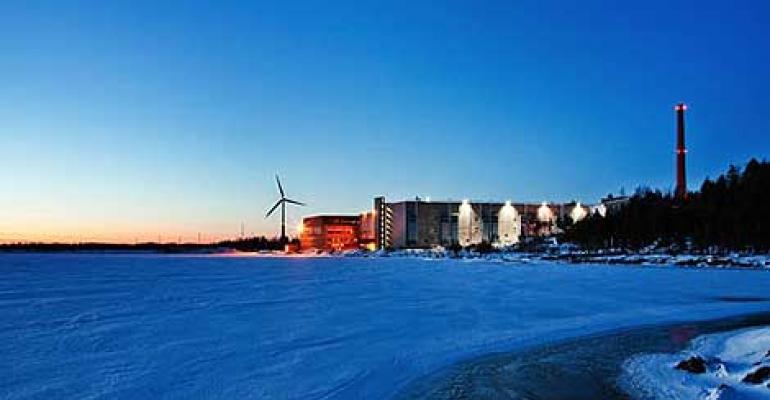 View of the Google data center in Hamina, Finland, with a wind turbine next to it (Photo: Google.)
Companies>Google (Alphabet)

Google purchased the total output of power from 4 more wind farms to power its Hamina, Finland data center. The Hamina facility is one of the most efficient data centers in the world, and it will run on 100 percent renewable energy beginning 2015. 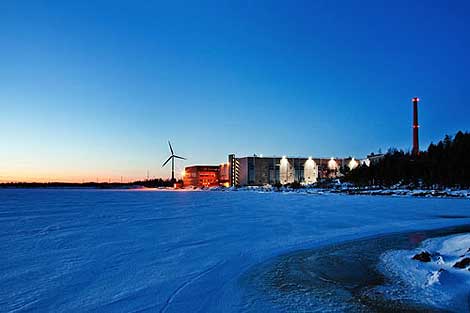 View of the Google data center in Hamina, Finland and a nearby wind turbine. (Photo: Google.)

Google will buy the entire electricity output of four new wind farms to support its data center operations in Hamina, Finland, the company said this week. The new power purchase from Eolus Vind AB in Sweden follows an earlier wind power deal in which Google purchased the entire 10-year electricity output of the new wind farm at Maevaara, in Övertorneå and Pajala municipality in northern Sweden.

"We’re always looking for ways to increase the amount of renewable energy we use," said Francois Sterin, Director Global Infrastructure at Google. "Long term power purchase agreements enable wind farm developers to add new generation capacity to the grid - which is good for the environment - but they also make great financial sense for companies like Google."

Eolus will commence construction of the four new wind farms in Alered, Mungseröd, Skalleberg and Ramsnäs, Sweden.  The 29-turbine project, with a total combined capacity of 59 megawatts, already has all its planning approvals and permits. The wind farms will become fully operational in early 2015.

“Our agreement with Google is a further endorsement of the potential of wind power in the Nordic countries,” said Hans-Christian Schulze, deputy CEO of Eolus. “We’re looking forward to building our new wind farms over the year and helping Google stay ahead of its commitment to carbon neutrality.”

All of this Swedish wind power will power Google’s Hamina, Finland facility. This cross-border arrangement is possible thanks to Europe’s increasingly integrated energy market.  Scandinavia’s Nord Pool market allows Google to buy renewable energy with Guarantee of Origin certification in Sweden, and consume an equivalent amount of power elsewhere in Europe.

The move helps the environment, but also protects Google from future increases in power prices through long term purchasing. The company is investing in new renewable energy projects that will deliver a return for its money. Over $1 billion has been committed to such projects in the U.S., Germany, and South Africa.

Google purchased the former Summa paper mill in March 2009. Since then, the company has transformed the location into one of the most efficient data centers in the world. The facility also employs seawater from the Bay of Finland in its high-tech cooling system. The first phase became operational in September 2011, and the facility keeps undergoing further expansion.

Starting in 2015, the data center will be primarily powered by wind energy via a new onshore wind park, which was announced last June. The company revealed it  will sign additional agreements, such as this one, as it grows, to power the data center with 100 percent renewable energy. This announcement is the company staying true to its word, with even more wind power locked in.