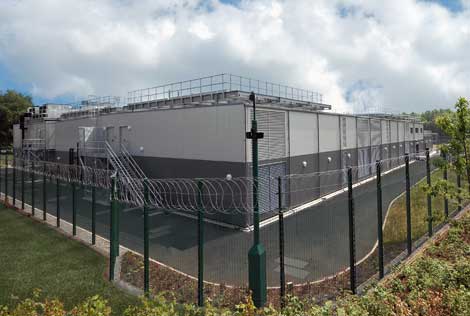 The exterior of a data center created with technology from BladeRoom, which is one of several new entrants in the U.S. modular market. (Photo: BladeRoom)

Modular Data Centers: Adoption, Competition Heat Up in 2014 - Will 2014 finally be the breakout year for pre-fabricated data centers? The year is young, but the modular market has already seen its first major M&A deal, and may soon have its first IPO. With marquee customers in the hyperscale market, and slow but steady progress with enterprise customers, modular designs continue to gain traction.

Outsourced Data Center Space Expected to Grow 15 Percent This Year - Almost a quarter of data center space in North America is now outsourced, and the growth trend in data center outsourcing and colocation shows no signs of abating. Outsourced data center investment has increased 13 percent over the past 12 months to around $8.8 billion, and it’s predicted to increase another 15 percent by the end of this year, according to a new report from DCD Intelligence.

Iceotope Gets $10 Million Funding, Partners With Schneider - After years in product development, liquid cooling specialist Iceotope has raised more than $10 million in venture capital funding from investors, and will work with Schneider Electric to commercialize its technology, the company said this week.

Internap Showcases New Secaucus Data Center - Internap Network Services unveiled its newest data center in Secaucus last night, offering a look inside a facility that will be a key driver of the company’s ambitions in the greater New York market. Internap executives said the 101,000 square foot data center will offer higher density than competing facilities, as well as slightly higher elevation – a key consideration for an area of New Jersey that was hit hard by Superstorm Sandy.