Internap Network Services unveiled its newest data center in Secaucus last night, offering a look inside a facility that will be a key driver of the company's ambitions in the greater New York market. 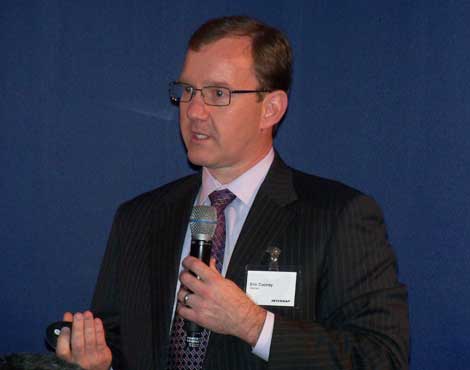 SECAUCUS, N.J. - Internap Network Services unveiled its newest data center in Secaucus last night, offering a look inside a facility that will be a key driver of the company's ambitions in the greater New York market. Internap executives said the 101,000 square foot data center will offer higher density than competing facilities, as well as slightly higher elevation - a key consideration for an area of New Jersey that was hit hard by Superstorm Sandy.

"In the last two years, we've seen a big increase (in density)," said Mike Higgins, Senior Vice President of Data Center Services for Internap. "This design enables us to support 18 kW a rack. This is a major future-proofing advantage."

Higgins' presentation also included a detailed look at maps of Secaucus highlighting the 100-year and 500-year flood plains, a reflection of the post-Sandy world in which customers place additional emphasis on researching worst-case scenarios. The Internap facility is outside of the flood plains in Secaucus, a low-lying area alongside the Hackensack River and New Jersey's famous Meadowlands wetlands. None of the town's data centers were flooded during Sandy, but access to some facilities was impeded by flooded streets.

Many new data centers aren't certain where they will find their future customers. The equation is simpler for Internap, as many of the customers for the Secaucus site will migrate from the company's data center at 111 8th Avenue in Manhattan, where Internap's lease with building owner Google will expire at the end of the year. Internap says it will be migrating customers out of 111 8th Avenue and into Secaucus throughout 2014.

Migration places a high priority on execution. But it's become old hat for some New York area end users, as noted by Shai Peretz, the Senior VP of Operations at content specialist Outbrain, an Internap customer at 111 8th.

"Over the past two years, we've moved several times," said Peretz. "We just moved into (111 8th) a year ago, during Sandy. Our previous provider went down for a week, so we had to move."

Peretz said Outbrain will be transporting about 1,000 servers across the Hudson to Secaucus. "This is a big move for us, and we'll need to plan it carefully," he said.

Internap already has its first 13,500 square foot data hall ready and waiting. The company has 5 megawatts of power in the building, with the ability to expand up to 22 megawatts and 60,000 square feet of technical space. The property was built by Prologis in 2012, and Internap moved in last July and began building out its data center infrastructure. Each data hall features three-foot raised floors, with power and cooling equipment housed in separate equipment galleries, allowing Internap to make the most of every square foot of white space, as well as providing additional security by ensuring that vendors don't need to enter the main data hall.

That footprint supports a suite of service that spans colocation, managed hosting and cloud computing. Operating an advanced, distributed infrastructure can require all these components, according to Raj Dutt, Senior Vice President of Technology of Internap.

Dutt says this reflects the complex nature of infrastructure solutions.

"There's a lot of religion and hype about cloud," said Dutt, citing arguments that "scale-out" cloud architectures have left "scale-up" enterprise models in the dust. "At Internap, we fundamentally believe the opportunity resides right in the middle - helping customers scale out, but with the reliability and control of a colo environment. On a long-term workload, colocation is going to cost you less.

"Don't follow the cloud hype," he said. "Build an infrastructure that combines colo and cloud, and makes sense for your apps." 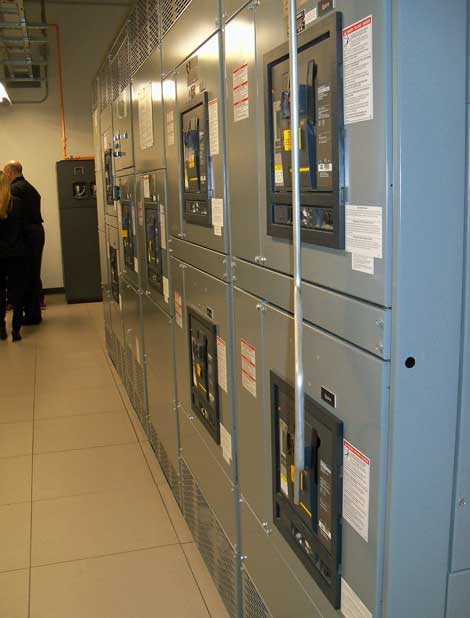 A look inside one of the UPS rooms at the new Internap data center in Secaucus, New Jersey. (Photo: Rich Miller).