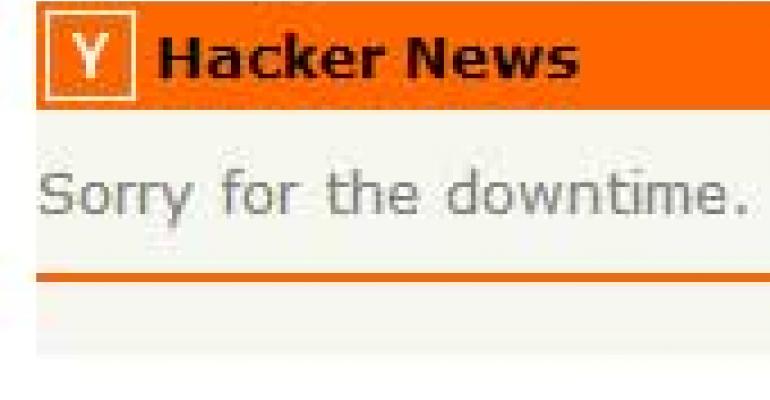 It was a rough weekend for uptime, with significant outages at UK hosting provider FastHosts and the startup news portal Hacker News.

It was a rough weekend for uptime, with significant outages at UK hosting provider FastHosts and the startup news portal Hacker News.

Customers of FastHosts were offline for up to seven hours Saturday after a utility power outage triggered connectivity problems. "Our datacentres switched over to UPS (Uninterruptable Power Supply) power whilst our backup generators started up for prolonged backup power," the company said on its status page. "Mains power to the site returned after a few moments, however although power was quickly fully restored to both datacentres we experienced a network issue that occurred as a result of this interruption to service."

Meanwhile, visitors to Hacker News have been greeted by timeouts and an error message  ("Yeah, that didn't work. Try again, perhaps later?"). The outage began Sunday and the site remained down as of early Monday. The error message contains a reference to CloudFlare's network, but the CDN says the problem is at Hacker News itself. "They're having problems with their server," tweeted CloudFlare CEO Matthew Prince. "Not a problem on our network. We've been in touch to see if we can help." Hacker news is a social news site operated by startup incubator Y Combinator.

UPDATE:  Hacker News remains offline as of 5 p.m. Eastern time, meaning it has been offline for an entire day. Still no official word on what's going on.