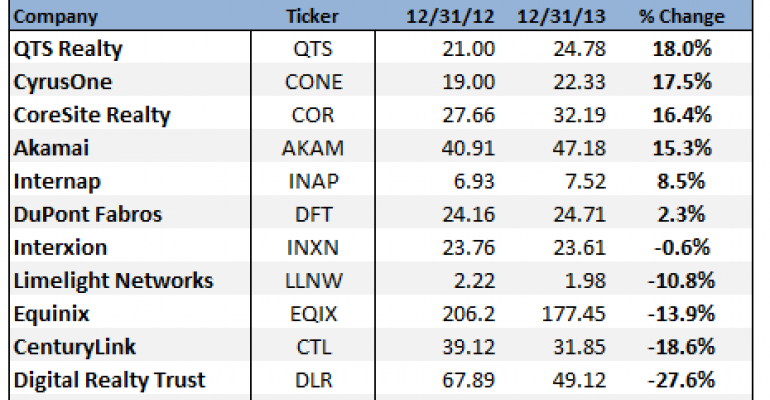 QTS Realty and CyrusOne were the top performers among publicly-held data center companies for 2013 after going public earlier in the year. But they were the best of a weak bunch. The sector trailed the broader market, as investors cooled on data center stocks amid growing cloud competition and debates about the proper valuation for service providers. 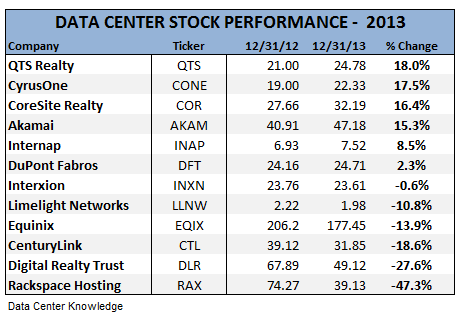 Here's a look at the data center winners and losers on Wall Street in 2013.

Wall Street loved IPOs in 2013, and that trend extended to the data center sector. QTS Realty and CyrusOne were the top performers among publicly-held data center companies for 2013 after going public earlier in the year.

But they were the best of a weak bunch. The sector trailed the broader market, as investors cooled on data center stocks amid growing cloud competition and debates about the valuation of service providers.

QTS Realty (QTS) ended the year at  $24.78, an 18 percent improvement on the $21 pricing of its IPO in October. Shares of QTS jumped in late December after analysts from Morgan Stanley recommended the stock. CyrusOne (CONE) had its IPO in January at $19 a share, and closed the year 17.5 percent higher at $22.33, recording strong sales along the way. The two newcomers edged out CoreSite Realty (COR), which had the best showing among incumbent data center REITs with a 16.4 percent gain for the year.

Despite those gains, it was a year many data center investors might like to forget, as even the sector's top performers trailed the broader market. The Dow Jones Industrial Average gained 26.5 percent for the year, while the S&P 500 improved by 29.6 percent and the NASDAQ soared 38.3 percent.

That weak performance marked a departure from recent years, when the data center sector outperformed the market with strong gains in both 2011 and 2012. By early 2013, the lofty valuations for data center and cloud computing companies came under scrutiny on Wall Street, including high-profile debates over the performance of two industry bellwethers, Rackspace Hosting (RAX) and Digital Realty Trust (DLR).

Rackspace had been on the vanguard of the providers gaining from interest in cloud computing, soaring 37 percent in 2011 and 73 percent in 2012. But in February Rackspace shares slid 20 percent after the company's earnings raised concerns that the rate of adoption for cloud computing services may be moderating. The company was then the focus of a critical writeup in Barron's asserting that RAX was overvalued. Subsequent earnings stumbles left Rackspace shares down 47 percent for the year, making it the sector's worst performer.

In May, hedge fund Highfields Capital Management asserted that investors should short shares of Digital Realty, saying the huge data center developer was understating the future investment in facilities that would be required to support its enterprise customers. Digital Realty said Highfields was “mischaracterizing and drawing inaccurate conclusions” from its disclosures, but the debate focused Wall Street's attention on data center maintenance costs. In October Digital Realty lowered its revenue guidance for the coming year, saying enterprise tenants were deploying new data center space more slowly than expected. That triggered a selloff in data center stocks, which helped push DLR shares to a decline of 27 percent for the year.

As for the fourth quarter performance, the Data Center Investor chart tracks closely with the full-year showings, with QTS and CyrusOne leading the pack, with Rackspace trailing. 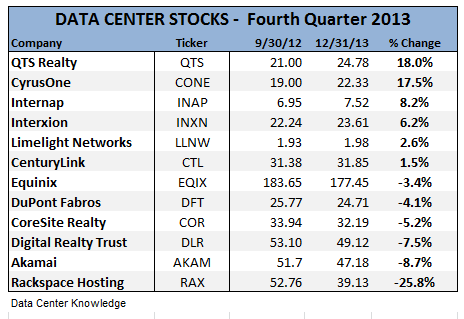