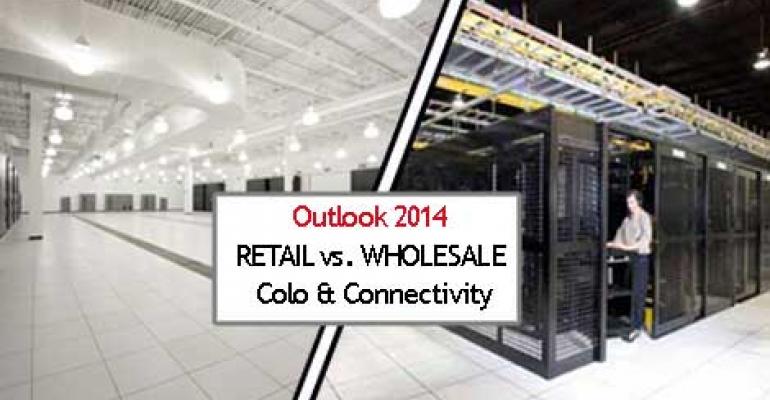 Looking ahead for 2014: Colo, wholesales and connectivity.
Colocation

Colocation Outlook 2014: Connectivity is Critical in a Changing Landscape

Data center connectivity is becoming a key differentiator as wholesale data center providers compete for customers with colocation companies. As the industry heads into 2014, the blurring of lines between "retail" colo and wholesale space is leading more providers to offer flavors of both products, and boosting interest in open internet exchanges that could extend peering activity to a broader spectrum of facilities. 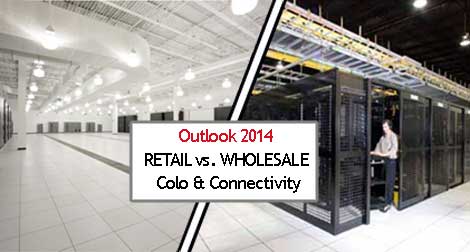 Looking ahead for 2014: Colo, wholesales and connectivity.

Data center connectivity is becoming a key differentiator as wholesale data center providers compete for customers with colocation companies. As the industry heads into 2014, the blurring of lines between "retail" colo and wholesale space is leading more providers to offer flavors of both products, and boosting interest in open internet exchanges that could extend peering activity to a broader spectrum of facilities.

The ability to connect with multiple networks has always been a key selling point for facilities in major markets, leading to the creation of large ecosystems of carriers, content providers and network services in key geographic hubs like northern Virginia, New York and Silicon Valley.

Are the boundaries between retail and wholesale data center services blurring, or becoming more distinct? That often depends upon who you ask, and what they're selling. What's clear is that competition for customers is intensifying, spanning boundaries and offering end users a growing array of choices for deploying their IT equipment in third-party data center space.

Some industry executives say the distinctions are becoming less relevant.

"I have never once had a customer approach me and ask me for wholesale data center or retail data center space," said Gary Wojtaszek, President and CEO of CyrusOne. "Although we discuss our business in this way to help our investor audience understand our company, we don't fundamentally think about the products in this simple two-state way, because our customers don’t. Our customers are trying to solve a specific data center problem."

Yet these models exist because they create meaningful differences in how data center space is priced, paid for and supported.

"Retail (colocation) is a service industry with a lot of handholding," said Chris Crosby, the founder and CEO of Compass Datacenters. "If you sell a megawatt of power on the wholesale side, it's a different business."

Broader Product Mix for Many Providers

A growing number of providers are offering both "retail" colocation and wholesale suites, including CoreSite, CyrusOne, QTS, Digital Realty, RagingWire and Equinix.

"We're seeing strong growth in both (retail and wholesale)," said Doug Adams, Senior Vice President and Chief Revenue Office of RagingWire.  "There is truth to the idea that they're blurring. The determination has always been the size of the oportunity and the length of the deal. The tipping point for what defines a wholesale deal used to be 1 megawatt, but it has definitely dipped down into the 250 kW range. We're differentiating on the quality of the infrastructure and high reliability."

Digital Realty, the largest player in the wholesale space, projects 20 percent annual revenue growth from colocation in the next three years, with colo revenue hitting $140 million by 2016. Equinix, the market leader in colocation, has launched a "business suites" product in northern Virginia and will soon expand the offering to its New York metro facilities.

Lines Are Brightening, not Blurring

Equinix and CoreSite are among the providers drawing a distinction between network-dense interconnection facilities and "undifferentiated" data center space to support large server installations.

"It's interesting that many people have talked about blurring the lines between wholesale and retail," said Charles Myers, Chief Operating Office of Equinix. "Frankly, I'd argue exactly the opposite. As the market segments, the choice for people to move large, non-performance-sensitive applications into wholesale is becoming an easy choice for them at the price points that wholesalers are offering.

"These undifferentiated deals that close at low price points simply are uninteresting to us," said Myers. "It is true that some wholesale players have retail offerings or are signaling their intent to develop retail offerings. But in my mind, that's not a blurring of the lines. That's an entirely different matter, and that decision by a wholesaler would come with a very significant investment required to support a large number of retail customers. All you have to do is look at our employee count, look at our (expenses) necessary to support that retail model and compare that to pure wholesalers, and I think you'll very quickly conclude that (wholesale) players can't just declare themselves as retailers and expect that they're going to successfully meet customer needs."

CoreSite was among the first wholesale providers to strike interconnectivity deals with European exchanges, and sees network exchange access as a key factor in pricing.

Ray says a facility's level of interconnectivity is being reflected in pricing for data center space. 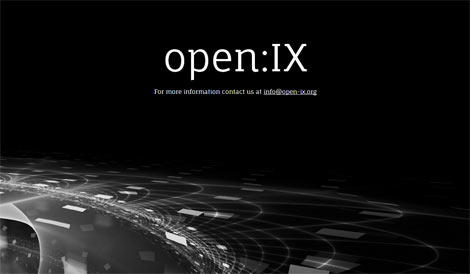 Will the emergence of the Open-IX movement boost the prospects of wholesale data center providers?

Is Open-IX A Game-Changer?

That's one reason why the interconnection landscape in the U.S. may soon be changing. One of the 2013's big stories in interconnection was the emergence of Open-IX, which seeks to  create a new network of member-governed Internet exchange points (IXPs) that allow participants to trade traffic. The group is embracing a non-profit model that is widely used in Europe and spreads exchange operations across multiple data centers in a market. In the U.S. these exchanges are typically hosted by commercial providers (most prominently Equinix), with interconnections focused in a single facility or campus operated by that provider.

The Open-IX movement is especially attractive for wholesale data center operators, who would benefit from the more distributed interconnection system. The London Internet Exchange (LINX), Amsterdam's AMS-IX and Frankfurt-based DE-CIX have all announced plans to enter the U.S. market in either northern Virginia or New York.

"We are now seeing new leasing opportunities with specific network requirements that Open-IX allows us to solve for our customers," said Digital Realty CEO Michael Foust. "It's too early to quantify the near-term financial impact from these initiatives, but we believe they will significantly enhance the appeal of our properties to a wider range of tenants."

DuPont Fabros Technology has already struck deals for LINX to have a presence in its Ashburn, Virginia campus, and AMS-IX to host a node in its NY-area data center in Piscataway, N.J.

"We certainly believe that it's the right thing for the U.S. market to endorse some form of Open-IX," said Hossein Fateh, President and CEO of DuPont Fabros. "It makes a lot of sense. Many of the customers are demanding it. If you look at the Board of Open-IX it's really who's who of the Internet. We are working to try and get some of the European exchanges and some of our data centers."

CyrusOne is also embracing Open-IX. "OIX is not competition to CyrusOne, it is actually a tremendous benefit to our Fortune 1000 client base," said CEO Wojtaszek. "As our data center and exchange points become certified, the OIX will bring in more content, cloud providers and networks for our ecosystem."

Equinix, for its part, says the emergence of Open-IX doesn't represent a major threat to its prominence in the interconnection business.

"There's always been competition," said Jason Starr, the Director of Analyst Relations at Equinix. "That's nothing new. There's been a lot of change in the business in the last 15 years, and we’ve focused on our core business.

"In many markets, we're the de facto Internet exchange point," said Starr. "It's really about the ecosystem. Networks and service providers invest their capital to be in Equinix data centers. These networks also become magnetic, and bring in other customers."

Those "magnetic" customers are among the reasons Equinix has launched business suites, offering dedicated, fully-demised data rooms instead of cages. Equinix says that this isn't a wholesale offering, but rather a custom solution for key existing customers that need both connectivity and a significant footprint.

Requirements larger than 250 kW "have never been our sweet spot," said Starr. "We'll get them if they're strategic customers."

Compass Datacenters' Crosby, who recently provided an overview of industry providers, products and pricing at the Gartner Data Center conference, said uptime remains the coin of the realm and the most important differentiator.

"We still make glorified power outlets," said Crosby. "It's what we do."