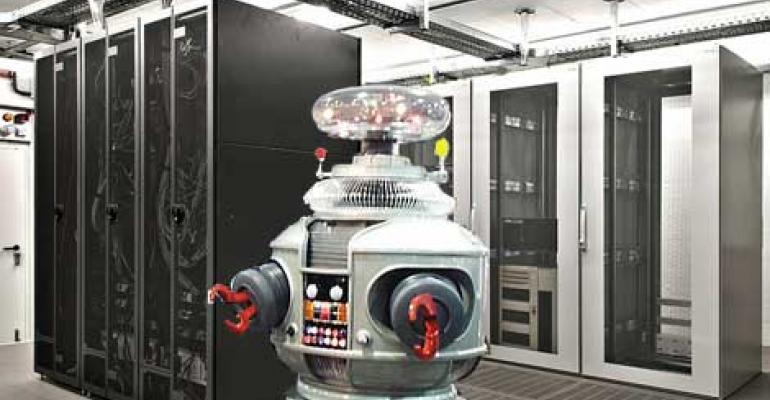 I, Data Center: An Interview with A Robotics Professional 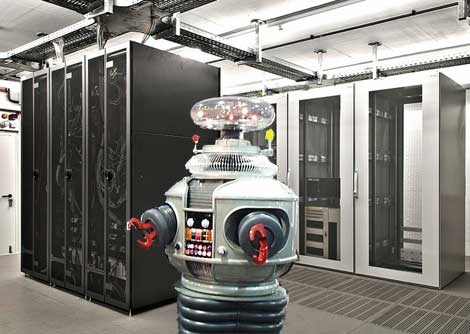 Is this what comes to mind when someone says "robots in the data center?" Much has changed in robotics and how it applies to data center automation.

Scott Jackson, Senior Robotics Programmer at DevLinks, has been working in the IT field for a very long time. He's a robotics automation programmer and designer and has begun to see action at the data center level when it comes to robotics integration. He’s seen numerous projects, designed many types of robotics environments, and is a big supporter of placing robotics as a supplement in the next-generation data center.

Jackson recently sat down with us for a detailed conversation around robotics, automation technologies, and the future of the data center model. Here’s that chat.

Bill: The conversation around robotics continues to heat up as more large shops begin to explore the idea. What are you seeing in the robotics world that's influencing this conversation?

Scott: Primarily, what I'm seeing drive this conversation is the new-found flexibility and adaptability in today's industrial robots, along with historically low costs for automation integration. Factories have been automated on a large scale for the last 30 to 40 years or so. For the most part, they have simply been repeating the same process over and over, without deviation. Newer capabilities (such as vision, RFID, force sensing, networking, etc.) are being baked into pipeline robots as standard or low cost options. These new capabilities allow the robot to conform to changes in its environment, rather than relying on total compliance to a specified norm. It's this kind of adaptability that would be necessary in a complex environment like a data center. After all, you're not building cars. You're handling thousands of components which aren't necessarily located with a high tolerance. A robot needs to be able to adjust to that on the fly. We're finally at that point in history where it's become feasible to assign these tasks to a robot.

Bill: That’s a very optimistic perspective. Plus, the notion that data centers can be complex is certainly very valid. Should data center administrators be learning about robotics? What sort of cross-training should happen?

Scott: Yes, but only to a point. While I applaud anyone willing to tackle robotics integration on their own, I would highly recommend seeking the services of an expert systems integrator for a project as large as an entire data center integration. A working knowledge of the robots themselves and the system as a whole is a must for easy scheduled and preventative maintenance, but there is simply too much to consider when it comes to system design.

Bill: Just like anything in technology, complexity is always a challenge that must be overcome. Still, automation, workflow orchestration, and data center optimization are all potential benefits that robotics can bring. Do you see a direct tie into management systems which help run data centers currently?

Scott: Industrial automation has been integrated with plant-wide data recording and production management systems for quite some time. The communication capabilities already exist, so I see no obstacle that would prevent something like that. In fact, I would think that a system like this would be necessary to help balance the workflow on the automation to get the absolute most out of it.

Bill: How have robotics advanced over the past 2 years? Have they become more intelligent, mobile, and easier to control?

Scott: By far the biggest advancement in industrial robotics has been adaptable technologies like machine vision, force sensing and learning vibration control. This stuff is not "new" to robotics, but it has recently become affordable enough that they can be used to replace old fashioned, complicated and expensive mechanical automation. A side effect of this has been that these new capabilities are opening up entirely new markets to robotics when it had previously been cost prohibitive to do so. More people are putting cameras on robots than ever before, and that increased demand has also led to increased development, making integration even easier.

Mobile robotics is making great strides too. Sensors used in mobile robots have  come down significantly in price in the last couple of years, thanks primarily to the popularity of smart phones. Position and location sensors are being miniaturized and optimized for mass production. We're going to start seeing smaller and cheaper mobile robots start filling roles in the workplace very soon as a result. Amazon's Kiva is an often cited example of low-impact mobile warehouse integration. I say low-impact because the system is quite literally the mobile units themselves and the shelves that they move around. It's considerably easier to install than the traditional gantry-based robotic retrieval system that a lot of other “lights-out” warehouses employ. Also worth mentioning would be Google's efforts at self-driving vehicles and their recent acquisition of seven different robotics tech firms. It's a safe bet that many more things than just automobiles will benefit from all of that development.

Bill: Let’s take a quick look into the future. Where do you see robotics going over three to five years?

Scott: In the next three to five years, I see the adaptive capability advances of the current generation of industrial robots leading to more collaborative work with humans. ANSI recently revised their safety standard, which included allowances for robots and humans to share the same work space safely. This is something that is radically new. Previously, robots had to be locked away in cages and humans couldn't come near them when they were in automatic operation. Well safety equipment has come a long way since the last ANSI revision, and robots have more awareness of their surroundings than ever before. Let's face it, there are some things that humans will always do better than a robot. If we can develop processes that allow the robot to do 90% of the work and not seriously injure a human operator while they do the rest, we will start to see robots popping up everywhere.

Bill: A big push-back from some data center folks has been the conversation that robotics are here to replace the admin. Is that true? Or, do you feel that robotics is going to supplement the human and reduce errors, simplify easy tasks, and improve overall data center performance?

Scott: Yes and no. Surely some jobs in the data center exist solely because there are so many laborious tasks involved in running one. However the low-skilled tasks are really the only ones in danger of becoming obsolete in the face of robotics. A robot can perform a physical task over and over, without deviating more than a couple thousandths of an inch each time it does it. The thing is that it needs to be told to do it in the first place. Robots lack intuition and analytical problem solving skills. We can define parameters within software quite well and react any time something strays outside of them, but the real world likes to throw curveballs. Humans will always be around to make sure everything goes according to plan.

Bill: The future looks to really revolve around cloud, mobility and even more data center utilization. Do you see a future of a "lights-out" data center being possible? Is an environment that that requires absolutely minimal human interaction plausible? And, how are you and your organization preparing for the inevitable increase of robotics within the data center?

Scott: I absolutely do see a lights-out data center in our future. One of the biggest hurdles in creating a truly lights-out factory warehouse is all of the product deviation. If you only make one thing and you produce it by the thousands, it's certainly much easier to make lights-out a reality. However most manufacturers are so diversified that it's never that simple, and compromises have to be made along the way. What data centers have going for them is that there is already a decent amount of standardization involved. When data center products start to be developed with automation and robotic handling in mind, that standardization will only improve.

At DevLinks, we always welcome the challenge of putting a robot into a new setting. While we are an automation company that primarily focuses on manufacturing, we do have staff that have considerable IT experience and have even worked for some of the major manufacturers in that sector. Speaking the language would certainly make any data center integration we might do in the future that much more seamless. With that pooled knowledge and our extensive experience with process control and 100% accountability, I believe we would be well prepared for the task. It will definitely depend on whether we're talking about new construction or adapting an existing data center, however. When we do have discussions about this topic, the general consensus is that it will be much easier to design a data center around the automation rather than the other way around. This is of course true of nearly any process you may want to automate. End-users who think about automation from the ground up almost always have better success than those who try to retro-fit.

Many data center and robotics professionals are predicting that the next couple of years will be big leaps when it comes to placing more robotics in the data center environment. Already, robotics designers are looking at ways that they can integrate their sophisticated robotics machines with the future data center model. These conversations are happening now and plans are already being drawn out. Just like any technology, there will be hurdles to clear. Still, by incorporating unbelievable levels of automation and data center optimization, you and your organization can be on the road to creating the true next-generation infrastructure.