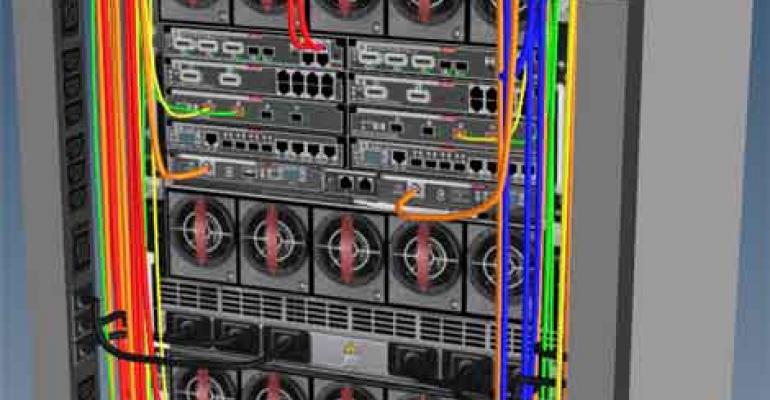 Step-by-step plans can help teams &#8220;see&#8221; everything, right down to every port on every device on the floor. (Graphic courtesy iTRACS.)
Design

Nlyte releases a SaaS version of its DCIM; ABB enters partnership with DataVision; and iTRACS builds a DCIM vendor ecosystem.

News from the DCIM marketplace includes: Nlyte releasing a SaaS version of its DCIM, iTRACS building a DCIM vendor ecosystem and ABB entering partnership with DataVision.

Nlyte released a SaaS version of its platform that allows users to get up and running with DCIM quickly. The SaaS version isn't a stripped down version for trial purposes only;  the SaaS version uses the exact same technology the company has always used. The only thing that is absent is integrations with BMC and HP.

"Our tool was designed to be a completely web-based," said Mark Harris, Vice President, Marketing and Data Center Strategy at Nlyte. "There's no client to download, no application to install. We designed it from day one to be server-based with any browser access."

The company is strictly focused on managing the lifecycle of the data center.  “It is very clear that the time has come for enterprises to properly understand what assets they have in their data center and to properly manage the entire lifecycle of each of those assets in the context of a data center as a whole,” said Doug Sabella, Nlyte Software President and CEO.

"Nlyte streamlines the workflows to get gear in there, keep it running, and get it off the floor," said Harris.

Nlyte allows people to swap out pieces or perform tech refreshes without the risky business of unplugging boxes without knowledge of how it will effect the infrastructure. Customers benefit from this in that they can get better utilization and make infrastructure on the whole more efficient.

The SaaS version is offered in a subscription model, so the company has gotten rid of many significant barriers to entry, such as big upfront costs and complexity. A SaaS-based version also allows the company to roll out updates to its customers more effectively. Customers are able to try new versions of its platform in a test environment before its rolled out so they're not surprised by these updates and potential migration issues.

The "ourDCIM Developer Community" is an industry-wide grassroots movement to build an open, best-of-breed DCIM vendor ecosystem for managing and optimizing physical infrastructure. The community’s goal is to:

Power and automation technologies giant ABB is getting deeper and deeper into the data center. The company announced a partnership with Switzerland-based DataCenterVision have announced a global partnership agreement.

ABB will resell DataCenterVision software application for data center asset, operations and IT infrastructure management. DataCenterVision will resell ABB’s software application DECATHLON for data center power and power-infrastructure management. Both products are complementary, and both companies quickly saw the benefits of having a combined offering.

DataCenterVision has designed and developed a full-web, client-server software application for data center asset, operations and IT infrastructure management.