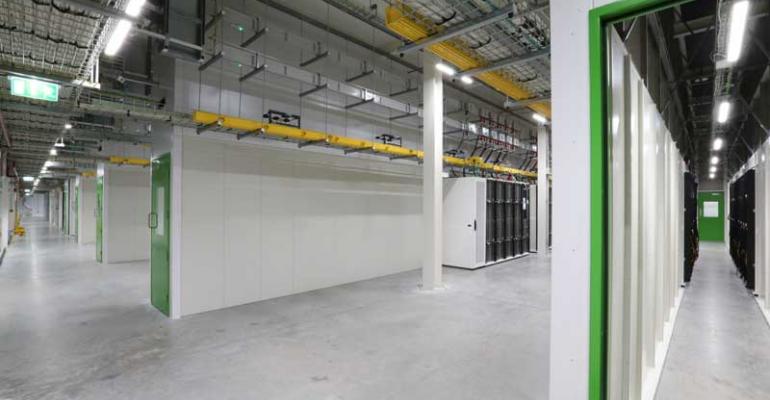 Microsoft has announced a major expansion of its Dublin data center, which serves as the primary delivery hub for its cloud computing services for Europe. The company will spend $230 million to add 169,000 square feet of space. 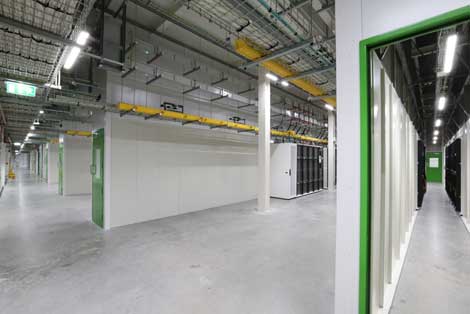 A data hall under construction in Microsoft's Dublin data center, showing hot aisle containment units (note that the plenum goes all the way to the ceiling) ready for server racks to be positioned against the containment area. (Photo: Microsoft)

Microsoft has announced a major expansion of its data center in Dublin, Ireland, which serves as the primary delivery hub for its cloud computing services for Europe, the Middle East and Africa (EMEA). The company will invest €170m million ($230 million US) in the expansion, bringing its total investment in its Dublin facility to $806 million (€594 million).

The new construction is already underway, and is expected to be completed in spring 2014 and will add 15,700 square meters (169,000 square feet) of data center space, boosting the total size of the facility to 54,255 m2 (584,000 square feet). The expansion will create 380 construction jobs, as well as 20 full-time staff in addition to the 80 existing workers.

The additional space will allow the company to expand its compute capacity for services including Office 365, Bing, Skype, Xbox Live, and the Windows Azure platform

"This expansion is evidence of the continued demand for Microsoft’s cloud services across Europe, the Middle East and Africa," said Cathriona Hallahan, Managing Director, Microsoft Ireland. "As the demand for these cloud-based services continues to grow we are investing to meet our customers’ needs. Not only does this highlight the growth in our cloud services business but it also highlights our continued commitment to investment and innovation in Ireland and Europe."

The expansion was welcome news for IDA Ireland, the country's inward development agency, which said it reinforced Dublin's value as a cloud computing hub. The city is also home to major European data centers for Google and Amazon.

"Data centres have been a buoyant sector for IDA for the past number of years and Microsoft’s continued investment in the sector will allow Ireland to win further investments worldwide," said Barry O’Leary, CEO of IDA Ireland. "This investment, by such a well-respected global brand, reinforces Ireland’s credentials as the leading location in cloud computing.’"

When the $500 million Dublin data center came online in 2009, it was an early example of a data center operating with no chillers, relying almost totally upon fresh air to cool thousands of servers in the 550.000 square foot facility, which powers the company’s suite of online services for tens of millions of users in Europe, the Middle East and Africa. Early last year Microsoft added a $130 million expansion that nearly doubled the capacity of the data center.

The 2012 expansion allowed Microsoft to implement several new tweaks to its design that have allowed it to more than double the compute density of each server hall while using less power. The facility operates at an overall Power Usage Effectiveness (PUE) of about 1.24, but the newer data halls run as low as 1.17.

The Dublin facility recycles 99 percent of all waste at the facility, including packaging, pallets, crates, and cabling.