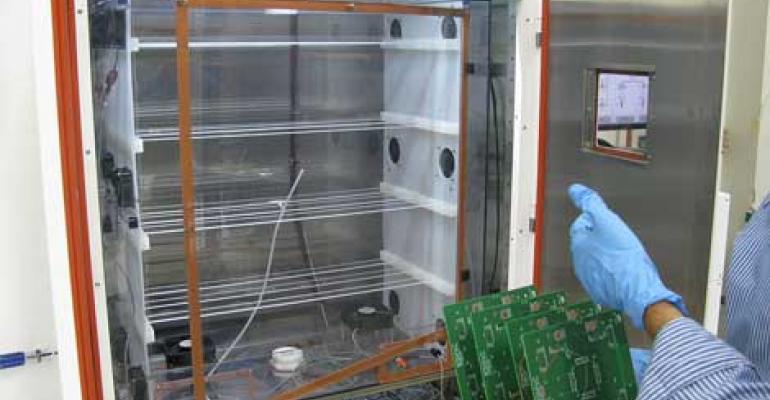 An Intel engineer places chip components in a specially-designed chamber that will expose them to gases that simulate high levels of environmental pollution.
Design>Power and Cooling

Intel, which has been a pioneer in documenting the benefits of free cooling, says high levels of pollution in China and India are shortening the live of some components of PCs and servers. It has set up a lab to conduct additional research into the issue. 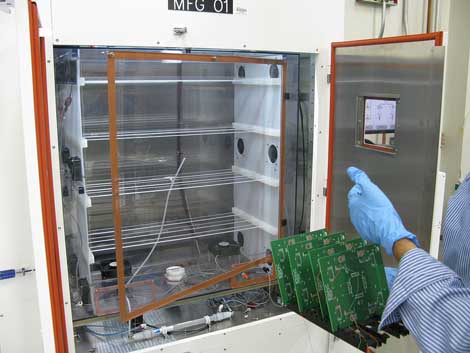 An Intel engineer places chip components in a specially-designed chamber that will expose them to gases that simulate high levels of environmental pollution. (Photo from Intel Free Press via Flicker)

As more data centers have turned to using outside air to cool servers, one of the concerns has been filtering contaminants. Intel, which has been a pioneer in documenting the benefits of free cooling, now says high levels of pollution in China and India are shortening the live of components of PCs and servers. The chipmaker says it has been seeing an uptick in component corrosion from customers in the Asia Pacific region, where systems are already exposed to higher heat and humidity.

“We are starting to see corrosion on systems (returned to Intel) that are higher than what we would have expected,” said Tom Marieb, a vice president in Intel’s Technology and Manufacturing Group. “They were disproportionately from Asia-Pacific and it gave us pause. The only other times we had seen this level was from known industrial usage segments like inside a factory, not data centers that are supposed to be controlled, sealed-off environments with air conditioning.”

To better understand the impact of pollution in these regions, Intel spent $300,000 to create a mixed flow gas chamber in its labs in Hillsboro, Oregon where it can test the durability of its components. The chamber gives engineers a higher level of control when introducing contaminants that mimic polluted air. For more details, see an excellent recent story at Oregon Live.

Intel says most of the corrosion has been seen in non-Intel parts, but it nonetheless is taking the initiative in seeking to engineer its technology to be durable in these environments.

Using fresh air to cool servers is one method of "free cooling" - using the outside temperature to support data center cooling systems. It's increasingly common in cooler climates, but harder to implement in warmer regions - although Facebook and others are now pushing the boundaries in using outside air on warm days, including 100 degree weather.

But Intel's findings server as a reminder that data center providers need to be vigilant about monitoring and filtering for contaminants in areas with above-average levels of pollution.