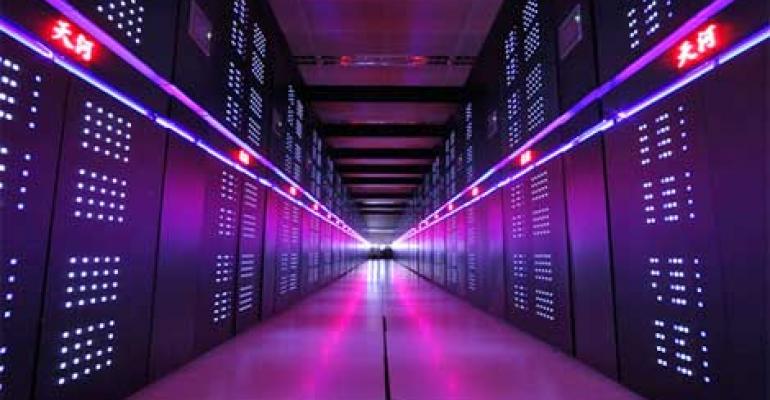 China's Milkyway 2, also known as Tianhe-2, has retained the number one ranking on the twice-yearly Top500 list of the most powerful supercomputers in the world.

A look at the rows of processors inside the Milkway-2 supercomputer in China.

China's Milkyway-2 supercomputer remains the most powerful supercomputer in the world. Milkyway 2, also known as Tianhe-2, has retained the number one ranking on the twice-yearly Top500 list of the most powerful supercomputers in the world. Much of the top 10 rankings remain the same as the June 2013 list, with Milkyway-2 maintaining a performance of 33.86 petaflop/s (quadrillions of calculations per second) on the Linpack benchmark, and the DOE's Titan performing at 17.59 perflop/s. The DOE's Sequoia IBM BlueGene/Q, Fujitsu's K computer and the IBM-powered Mira supercomputer at the DOE's Argonne Lab round out the top five.

The Top500 was announced as the SuperComputing conference gets started in Denver this week.

A new entry comes in at number six: Piz Daint, a Cray XC30 system installed at the Swiss National Supercomputing Centre (CSCS) in Lugano, Switzerland and now the most powerful system in Europe. Piz Daint achieved 6.27 Pflop/s on the Linpack benchmark. Piz Daint is also the most energy efficient system in the top 10, consuming a total of 2.33 MW and delivering 2.7 Gflops. Cray announced the Swiss contract earlier in the year, noting that the supercomputer would be transformed to include NVIDIA Kepler K20X GPU accelerators. This YouTube video shows installation of the Cray XC30.

A total of 31 systems performed greater than a petaflop/s of performance on the November 2013 list, with the top 17 systems achieving half of the total 250 Petflop/s combined performance. Milkyway-2 and Stampede are using Intel Xeon Phi processors, while Titan and Piz Daint are using NVIDIA GPUs. A total of 53 supercomputers are using accelerator or co-processor technology. Ninety-four percent of the systems use processors with six or more cores and 75 percent have processors with eight or more cores. Intel continues to provide the processors for the largest share (82.4 percent) of TOP500 systems.