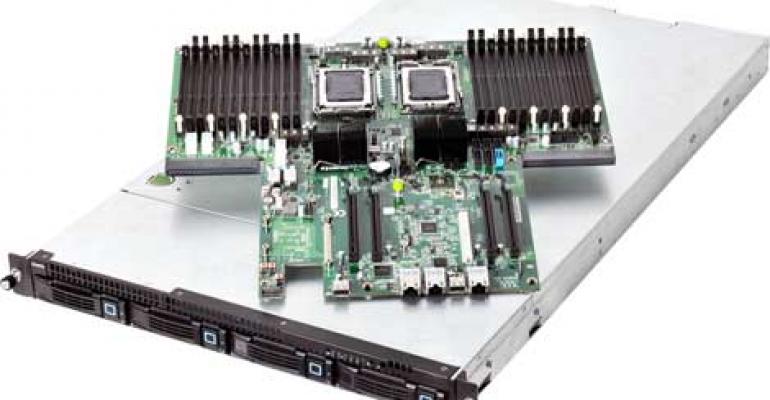 AMD announced it is enabling its accelerated processing units for next-generation servers through advancements in software tools developed by AMD, and in collaboration with technology partners and the open source community. The news was released during AMD's annual APU13 Developer Summit in San Jose this week.

During its annual APU13 Developer Summit in San Jose this week, AMD announced it is enabling its accelerated processing units (APU) for next-generation servers through advancements in software tools developed by AMD, and in collaboration with technology partners and the open source community.

"Servers must be efficient, scalable and adaptable to meet the compute characteristics of new and changing workloads. Software applications that leverage server APUs are designed to drive highly efficient, low-power, dense server solutions optimized for highly parallel and multimedia workloads,” said Suresh Gopalakrishnan, corporate vice president and general manager of the Server Business Unit at AMD. “We have evolved our processor roadmap to support this opportunity, and now we are showcasing how the APU software ecosystem is gaining momentum and what developers can do to participate.”

With server APUs based on Heterogeneous System Architecture (HSA) on the horizon, AMD has developed tools for software developers to take advantage of the benefits that HSA provides. HSA enables the CPU and GPU to work in harmony on a single piece of silicon, seamlessly moving the right tasks to the best-suited processing element with no data transfer penalties and makes more memory available to the GPU so that complex processing tasks can fit in a single node.

With both CPU and GPU compute capabilities available in its a HSA based server, AMD is collaborating with technology partners and the open source community to provide tools for developers. AMD and Oracle have joined forces on Project Sumatra - an open source project to enable developers to code in Java and take advantage of GPU compute. PGI Accelerator Compiler enables developers to add OpenACC directives that support AMD APUs and discrete GPUs to Windows and Linux Fortran, C and C++ programs.  At APU13 AccelerEyes is showcasing the use of libraries to enable heterogeneous computing, and HP is providing an overview of its HP Moonshot dense server environment for hosted desktop.

AMD is helping to achieve this mission by improving its unified SDK, by adding several new capabilities, adding a Media SDK 1.0 beta, and promoting new heterogeneous acceleration optimizations in several open source libraries with the goal of making it simple for developers to accelerate applications. It is also improving its CodeXL tools suite by supporting Java and incorporating static kernel analysis capabilities.

“Kaveri” is the first APU with HSA features, AMD TrueAudio technology and AMD’s Mantle API combining to bring the next level of graphics, compute and efficiency to desktops (FM2+), notebooks, embedded APUs and servers.  FM2+ shipments to customers are slated to begin in late 2013 with initial availability in customer desktop offerings scheduled for Jan. 14, 2014. Further details will be announced at CES 2014.