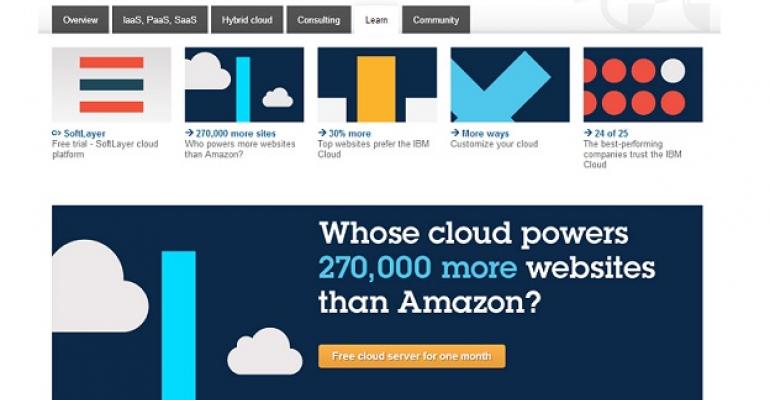 Targeting Amazon Web Services as its competition, IBM wants to remind the public that its cloud hosts 270,000 more websites than AWS. This is part of IBM’s new online and print campaign that singles out AWS.

IBM wants to remind the public that its cloud hosts 270,000 more websites than Amazon Web Services including “more of the most highly trafficked websites than Amazon and every other cloud provider.” This is part of IBM’s new online and print campaign that singles out AWS as its competition.

According to a Washington Post report, the campaign will appear in major newspapers and business magazines, as well as online and outdoors this week. Many commentators have noted that it’s peculiar that IBM would mention a competitor in its ads because it has rarely done so in the past.

This new marketing effort could be exactly what IBM is looking for to help its SoftLayer division gain even more traction against cloud giant AWS. It may also be significant that longtime SoftLayer competitor Rackspace Hosting was absent from the new advertisements, signalling that AWS and its specific market is IBM’s interest.

There may be a specific animosity between the companies after a government contract worth roughly $600 million to provide cloud services to the CIA was given to Amazon Web Services after IBM withdrew from a series of legal challenges to the bidding procedure.

Whether this new advertising campaign escalates into a marketing battle along the lines of soda rivals Coke and Pepsi remains to be seen. But with a cloud-computing market estimated to be worth a total of $40 billion annually and growing, it’s not only a battle over technical capabilities, but also consumer attention and opinion. Any advantage around how services are seen shall not be ignored.