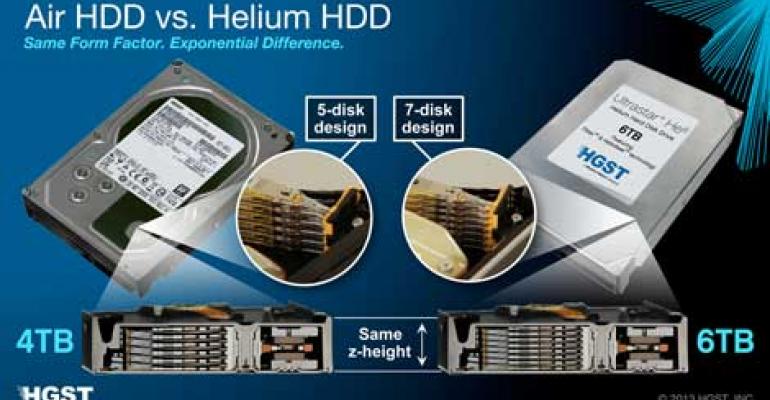 Graphic shows difference between an air-filled hard drive and a helium-filled drive. Click to enlarge. (Photo by HGST.)

HGST previously described the benefits of using helium in a sealed drive. Since the density of helium is one-seventh that of air, there is dramatically less drag force acting on the spinning disk stack so that mechanical power into the motor is substantially reduced and also it means that the fluid flow forces buffeting the disks and the arms, which position the heads over the data tracks, are substantially reduced allowing for disks to be placed closer together and to place data tracks closer together. The lower shear forces and more efficient thermal conduction of helium also mean the drive will run cooler and will emit less acoustic noise.

Leveraging the inherent benefits of helium, the new Ultrastar He6 drive features a 7Stac disk design with 6TB, making it a very high capacity HDD.  The helium platform will serve as the main platform for new technologies like shingled magnetic recording (SMR) and heat-assisted magnetic recording (HAMR) where HGST will continue to push the HDD areal density envelope. The new 6TB drive is 50g lighter than a standard 3.5 inch drive, has low power consumption - with 49 percent better watts-per-TB, and has a small footprint in a standard 3.5 inch form factor.

“The Netflix Open Connect delivery platform is a highly optimized video content delivery network. We serve billions of hours of streaming video per quarter to over 40 million subscribers,” said David Fullagar, director of Content Delivery Architecture, Netflix. “As part of our efforts to optimize the delivery ecosystem for Netflix and our Internet Service Provider partners, we strive to build better and better streaming appliances. The high storage density and lower power usage of the Ultrastar He6 hard drives allow us to continue with that goal, and create a great customer experience.”

Another large requirement for data storage comes from CERN, which operates the world's largest particle physics laboratory. Olof Bärring, IT Department section leader responsible for facility planning and procurement at CERN, said, “Over the past 20 years, we’ve recorded more than 100 petabytes of physics data, and our projected data growth rate is accelerating. To scale efficiently, we must deploy vast amounts of cost-effective storage with the best TCO. We have tested the helium drive and it looks very promising: it surpassed our expectations on power, cooling and storage density requirements. We’re excited about the opportunity to qualify the HGST Ultrastar He6 hard drive in our environment.”