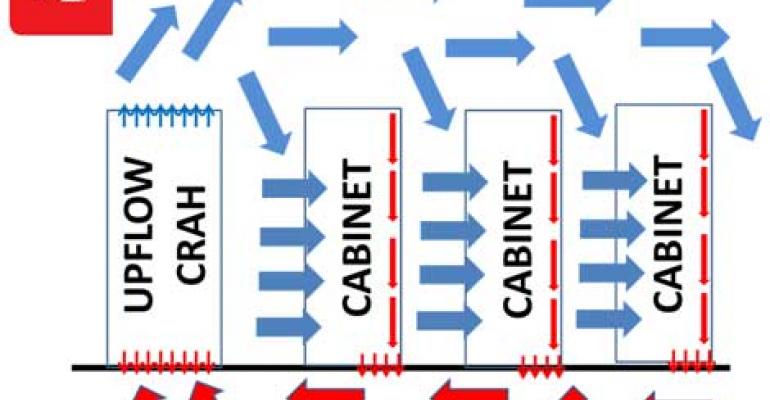 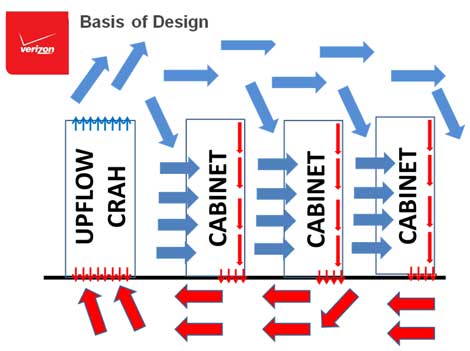 A diagram of a new airflow pattern being tested by Verizon in an effort to improve its cooling efficiency. (Image: Verizon)

PALO ALTO, Calif. - Verizon Terremark is experimenting with a novel way to push hot and cold air around data center racks. Ben Stewart, senior vice president of facility engineering at the company, talked up the concept Tuesday at the 2013 Data Center Efficiency Summit.

Stewart calls the new approach virtual containment. Think of the concept as a new and potentially energy-saving way to push hot and cold air among racks in a data center.

Instead of having a downflow computer-room air handler (CRAH) on a raised floor running at a set speed and possibly not delivering enough cool air to a rack - or too much of it - Verizon is interested in finding a happy medium. Stewart opted for the term "Goldilocks zone" in his explanation.

"We can actually tune it to deliver exactly the right amount of cold air to this aisle and to this cabinet," he said.

Researchers tried putting temperature sensors in cold aisles, and whenever it gets too cold, an alarm went off and an employee adjusted the floor tiles to deliver just the right temperature. But such a manual process might not scale well. The company developed a system to "dynamically balance the floor to achieve the Goldilocks zone, without the guy having to come out there," Stewart said, resulting in savings of over $1 million a year with an eight-month payback period.

Then the researchers looked at adding barriers to form hot and cold aisles, but the result was too complicated. The system in tests now is simpler, with cold air being pushed over several adjacent aisles and hot air being pulled down through the cabinets and sent back to the CRAH underneath the cabinets.

"All we have to worry about is cold air sneaking back down there," Stewart said. "It's something we're playing with right now, just kind of on the drawing board."

The experiment currently spans around 2,000 square feet, Stewart said after his presentation.

Broader Focus on Efficiency and Sustainability

The airflow experiments are part of a broader focus on data center energy management at Verizon. The company already lays claim to six solar power sites that generate 5.4 megawatts of electricity, and 12 fuel-cell sites that make 9.6 megawatts, according to figures Stewart shared in his presentation. The figures put the company ahead of some other companies in the Fortune 500.

But increasing reliance on green energy sources isn't the only way to reduce environmental impact. Energy efficiency can also move the needle - thus Verizon's recent work in the area.

The company has begun working more with free cooling, and its Terremark data center unit is a long-time proponent of using flywheels for uninterruptible power systems.

Implementing free cooling with outside air at data centers could be another way for Verizon to consume less energy in its operations.

"As the market starts to accept that we can raise temperatures in the data center -and as we all know, we certainly can - then we have more sites where we can actually use free cooling," Stewart said.