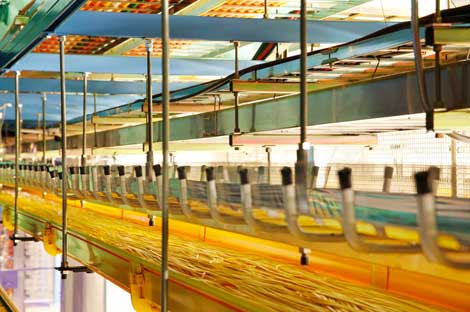 A full cable tray reflects the interconnections available in an Equinix data center. CloudSigma has added space at an Equinix site in Ashburn, Virginia. (Photo: Equinix)

Customers can now more easily geobalance workloads across multiple data centers, thereby keeping their data and mission-critical applications accessible in the event of a disaster or a system outage. The Las Vegas can failover to Virginia, and vice versa. Deploying at both sites means a web service can be closer to end users

CloudSigma doesn’t disclose installed customers for any of its cloud locations, but the company says it has seen a 10-15 percent increase month on month in capacity usage across its various cloud locations.

The selection of Equinix for its east coast presence was initially announced as the two companies partnered last July. Zurich and DC are the first phase in an ambitious targeted roll-out for CloudSigma in select markets covered by Equinix’s global footprint.

"The combination of increasing customer demand and our growing partnership with Equinix made this an ideal time to grow our public cloud to a second U.S. data center location," said Robert Jenkins, CloudSigma CEO. "This expansion shows further validation for our uniquely flexible and customer-centric public cloud model – something we expect to build out in additional regions, including Asia, Latin America and the Middle East, in the near future."

"We help customers connect around the world and are pleased to have CloudSigma expand with us in this additional data center location,” said Dick Theunissen, Equinix EMEA CMO. “We have more than 650 customers colocated with us in the Ashburn data center campus in the D.C. metro area. The Ashburn data centercampus continues to be of great strategic importance for the company, as it represents one of the largest Internet exchange points in the world, and, by bringing one of the best-of-breed IaaS providers directly to them, we are fostering even more productive computing environments for customers within our IBX.”

CloudSigma released version 2.0 of its platform last June, embracing Software Defined Networking (SDN) and Solid State Drives (SSD). “The feedback has been excellent,” said Jenkins. “CloudSigma has been seeing a doubling of conversion rates on new business on the new platform and existing customers have also reported positive feedback with the additional feature set. We have also dropped prices significantly over the last six months, offering even better value whilst at the same time raising our overall performance levels using SSD, SDN and other technological improvements within our cloud stack.” Prices have dropped a cumulative 28 percent for CPU and 36 percent for RAM in the last six months.