The exterior of the new data center at Syracuse University, which includes $5 million of energy efficient data center technology from IBM.
Industry Perspectives

The Syracuse University Green Data Center is now a reality and has been in successful operation for over three years. The data center, at 6,000 square feet includes an adjacent power plant containing the combined heat and power system. David Blair of GEM Energy, who worked on the systems running the facility, outlines how the innovations deployed save power and increase reliability.

David Blair, P.E., senior vice president of GEM Energy, directs the design of combined heat and power (CHP/CCHP) projects using gas turbine and advanced technologies including the Syracuse University Green Data Center for which he provided oversight and management of the project team responsible for the development, installation and commissioning of the first hybrid UPS micro turbine tri-generation system in the world.

The Syracuse University Green Data Center is now a reality and has been in successful operation for over three years. The GDC, at 6,000 square feet includes an adjacent power plant containing the CCHP system. (Data Center Knowledge published a photo tour of the facility here.)

The data center is powered by twelve (12) Capstone Microturbines, rated 780 kW and configured in two groups of six (6) in an A and B bus arrangement. The Microturbine engine exhaust stream is directed by insulated ductwork into two Thermax absorption chillers. These 150 ton chillers provide cooling water for the data center as a first priority and are interconnected with an adjacent classroom building. Two Cain, HRM’s, rated 4.0 MMBTU/Hr produce hot water for heating the adjacent building. Fuel efficiency exceeds the NYSERDA minimum of 60 percent annually. 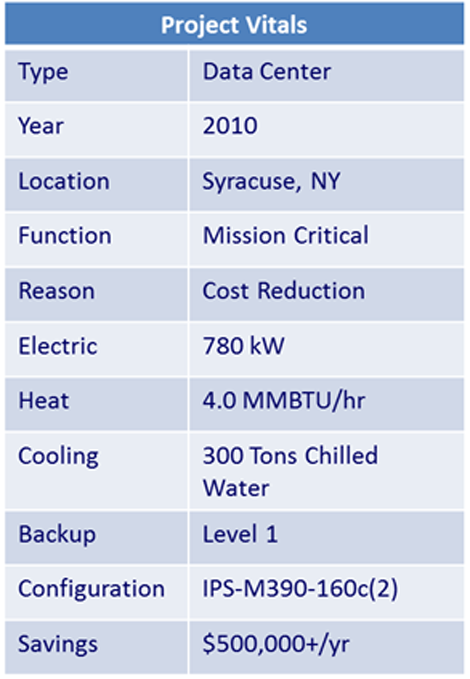 At the Green Data Center, the traditional solution is replaced by the Microturbine CCHP system. This is possible because of innovation in multiple ways.

An IBM innovation, the rear door and side-car heat exchangers cool the air exiting from conventional computer racks using water. The result is quiet and efficient. The CCHP system is the source of chilled water for cooling. Thermal pictures, with doors open and closed, illustrate the magnitude of this cooling improvement.

In a traditional data center, only 50 percent of the electric power delivered is used by the computers and Power Utilization Effectiveness, or PUE = 2.0. The CCHP system at the Green Data Center is the game changer. First, absorption cooling technology substitutes for electric cooling with a reduction of 27 percent. Second, water replaces air cooling with a reduction of infrastructure that is dramatic. At the Green Data Center, a PUE = 1.28 is the result for three years.

The power plant consisting of 12 Capstone Hybrid UPS MicroTurbines is environmentally friendly. Compared with traditional grid power generation, a significant reduction in carbon footprint is possible. We breathe easier because of reductions in carbon dioxide by 61 percent and nitrous oxide by 98 percent.

Encouraged to explore new ideas, the project team was reminded that the ribbon cutting date would follow in only six months after breaking ground! Some features of the data center included:

The Green Data Center is a success. The traditional methods and tried-and-true solutions are certainly safe and will not rock the boat. But, remember that we did not get to the moon riding a hot air balloon.

If you are considering a new data center or planning a retrofit to an existing data center, then look to Syracuse University. Visit the campus, speak with the owners, and take time to kick the tires. In this way, you will quickly learn more about the CCHP advantage that includes innovations in energy reduction and reliability improvement.