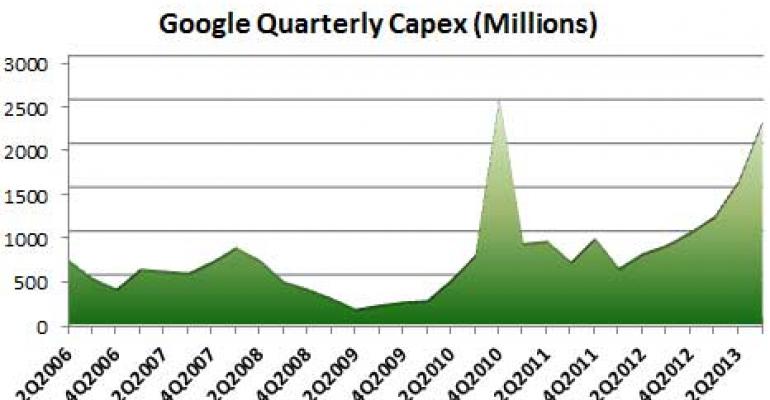 Google continues to invest heavily in its Internet infrastructure, recording a whopping $2.29 billion in capital expenditures in the third quarter of 2013, the company said Thursday. 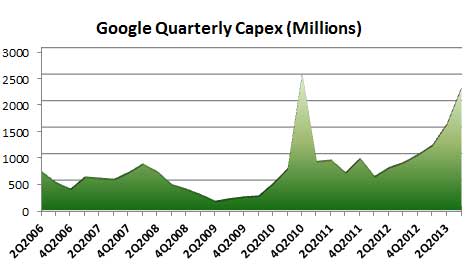 Google's capital expenditures have climbed steadily from quarter to quarter over the past two years.

Google continues to invest heavily in its Internet infrastructure, recording a whopping $2.29 billion in capital expenditures in the third quarter of 2013, the company said Thursday. The spending is driven by a massive expansion of Google's global data center network, which represents perhaps the largest construction effort in the history of the data center industry.

The $2.29 billion spent in the third quarter was the company's second-largest quarterly CapEx investment ever, trailing only the
$2.5 billion total for the fourth quarter of 2010, when it spent $2 billion to purchase 111 8th Avenue in New York. Google has been steadily ramping up its spending in each of the last seven quarters, crossing the $1 billion per quarter mark late last year.

But don't think Google is spending with abandon. The company remains focused on capital efficiency as well as energy efficiency. Each of the 2013 expansion projects has represented an additional phase at an existing campus where Google has already built at least one data center. Building multiple facilities at a single site can be cheaper than building in a new site, as basic infrastructure for power and connectivity is typically installed during the buildout of the first facility, leaving less work and expense in subsequent phases.

The third quarter spending pushes Google's total investment in its infrastructure past $23 billion.