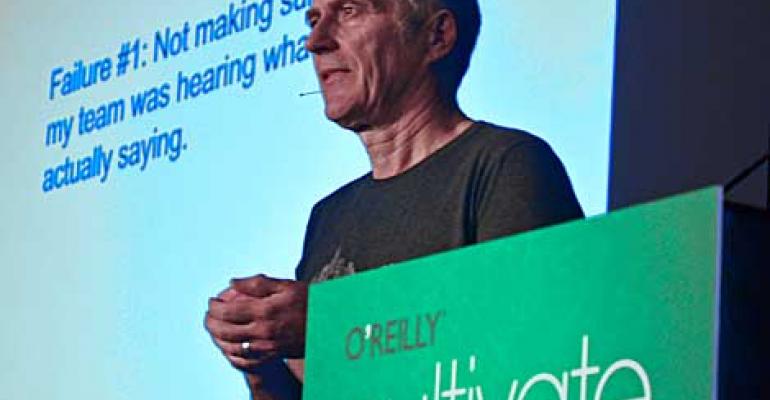 Tim O&#8217;Reilly, O&#8217;Reilly Media founder and CEO, shared points of how he failed as he was evolving his business. Major points included, not making sure that staff heard what he was saying and financial and operational discipline. (Photo by Colleen Miller)
Design

Tim O'Reilly: Learn From Your Failures and Build Something Great

What happens when engineers become leaders? Tim O'Reilly examined the topic using an approach familiar to data center managers: the failure analysis. O'Reilly, a leading technology visionary,discussed his failures and what he has learned from them. 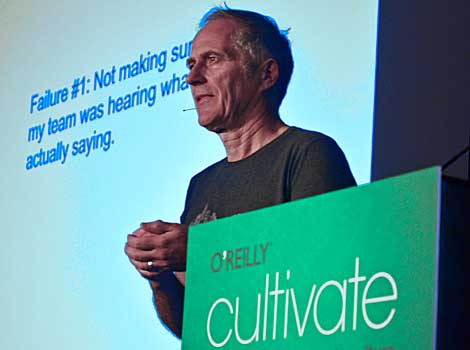 Tim O'Reilly, O'Reilly Media founder and CEO, shared points of how he failed as he was evolving his business. Major points included, not making sure that staff heard what he was actually saying, and instilling financial and operational discipline. (Photo by Colleen Miller.)

NEW YORK - What happens when engineers become leaders? That's the question at the core of "Cultivate," a new conference from O'Reilly focused on entrepreneurial leadership for technology companies.

In this morning's keynote, Tim O'Reilly examined the topic using an approach familiar to data center managers: the failure analysis. O'Reilly, the founder and CEO of  O'Reilly Media, discussed the failures he experienced in building one of the industry's leading brands for publishing and events, and what he learned from them.

O'Reilly shared the lessons of how an ambitious vision must translate into strategy and tactics to create a sustainable organization that puts money in the bank. O'Reilly Media's mission is "changing the world by spreading the knowledge of innovation" and telling values-driven technology stories.

Steve Jobs and Trusting Yourself

Like a number of the talks that followed, O'Reilly spoke about how to strike a balance between creativity, innovation and the everyday basics of building a business culture. That means remaining open to new ideas, while still trusting yourself and your beliefs. The latter was a strength for the late Steve Jobs, he said.

"There's a real culture of Steve Jobs right now," said O'Reilly. "There are dark sides to it. Apple is a company that is ruled by fear at times, and some people at Apple are driven by strange mandates ... But I wish I'd channeled my inner Steve Jobs more often and said 'that's crap.'

"There were times that I let others chip away at my values and the way I thought things should be done," said O'Reilly. "Don't accept the idea that someone can tell you to do something because 'that's how it's done.' That's not how you build a great company. As you build a culture, apply the same kind of creative thinking you apply to your products."

Is Your Team Getting the Right Message?

Communications is critical in creating a culture in which the big vision translates to the bottom line. O'Reilly said it's vitally important to ensure that leaders articulate their goals clearly and check to see that their teams are hearing the right message, to ensure there's not a disconnect. In an organization focused on innovation and new thinking, it's important not to devalue business concerns. O'Reilly said this was a culture challenge for O'Reilly Media during the dot-com boom near the end of the 1990s.

"I ended up with a small group of people worrying about the business and a larger group thinking'why would I worry about that,' " he said.

When the tech stock bubble burst in 2001, O'Reilly was forced to retrench. His company had been profitable, but hadn't put money in the bank to provide ride-through funding for leaner times.

"We barely survived, and it didn't have to be that way," said O'Reilly. "Ultimately, you have to pay the bills. It's really important to be frugal and learn how to spend money on things that really matter. Financial discipline really does matter."

That transition led to a major change in the economics of O'Reilly's technology books, which are widely recognized for their animal-themed cover art. In the 1990s, O'Reilly said, these books would net sales of $250,000 per title, but the company was "hemorrhaging cash." In the 2000s, the books averaged just $70,000 per title, but O'Reilly Media was able to put money in the bank.

The goal throughout has been to "create more value than you capture." O'Reilly has an interesting metric for that, noting how many successful Silicon Valley executives have told him that they got their start reading an O'Reilly book.