Seismic certification of critical electrical equipment is an important component in the building of new data centers in every geographic location in the United States, writes Bhavesh Patel of ASCO/Emerson Network Power.

Bhavesh Patel is Director of Marketing and Customer Support, ASCO Power Technologies, Florham Park, NJ, a manufacturer of 2.50 certified power transfer switches which can be used anywhere in the U.S.

Seismic certification of critical electrical equipment is an important component in the building of new data centers in every geographic location in the United States. The topic should be addressed by consulting engineers, contractors, and data center owners early on in the life of a project for several reasons, starting with maximizing the safety of occupants during and after an event and including preserving business interests and continuity of operation. Increasingly, data centers are considered critical facilities for normal functioning of any business since they are the fuel that keeps an organization working.

Building code standards for seismic certification of electrical equipment in critical facilities have strengthened over recent years, with today's equipment now required to have the capability to endure higher ground acceleration levels to keep a facility operational during and after a seismic event.

Flexible critical systems and components that may need to qualify for seismic certification according to building code standards include transfer switches, switchgear, fire pump controllers, and other on-site power systems.

There are special inspectors AHJs (Authorities Having Jurisdiction) responsible for looking very closely at essential electrical equipment to ensure the equipment and its installation pass muster. Equipment that fails inspection is red-tagged, which could result in a slowdown of the construction schedule until the violation is removed or in an increase in the cost of insurance. Red-tagging could even make the building unacceptable to the insurance company or may result in the denial of a certificate of occupancy.

The International Building Code (IBC) makes reference to the categorization of buildings as defined by the U.S. Geological Survey, assigning Occupancy Categories I through IV, with IV being the most stringent and the designation for essential facilities that must continue to operate during and after an earthquake. The California Building Code (CBC) is even more stringent in how it addresses the role of seismic event protection.

One way for electrical engineers to ensure they properly write specifications is to review the structural engineer's notes on a project and incorporate them in their design where data on building type and its seismic design category, ground acceleration, soil conditions and seismic design forces that the building and its critical equipment must withstand will be found.

The IBC 2012/09/06 strengthened requirements (compared to the IBC 2003) for electrical systems and components that will be incorporated into Category IV buildings. The most significant change is that the U.S. Geological Survey revised upward ground acceleration throughout the country.

Prior to 1989, IBC targeted structural elements without taking into account non-structural equipment that must continue to function in Category IV buildings. And only engineering proof was required. Times - and code - have changed.

USGS now uses Ground Acceleration values, known as Seismic Demand Spectrum, or SDS, in place of zone ratings to identify the risk of severity of earthquakes by region. SDS represents the base acceleration forces for a specific site and ranges between 0 and 2.50. 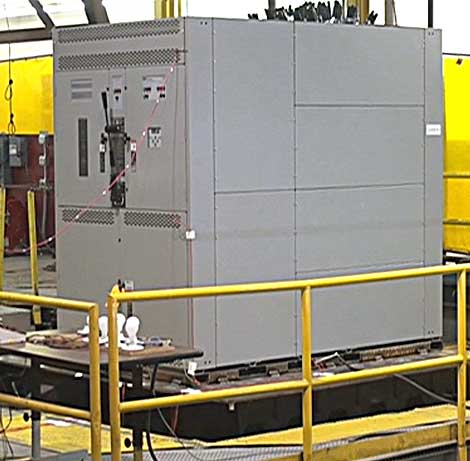 4000A bypass isolation automatic transfer switch on shake table for testing in the simulation of a seismic event.

For example, power systems installed on rooftops in California must be designed to an SDS  of 1.93 (though some products are certified even higher). Products that are 2.50 certified can be used anywhere in the country. Some states might require a Professional Engineer from the state to sign off on equipment Seismic Certification.

Manufacturers are required to independently test their products to meet the new levels. Equipment must be certified to the SDS values for the site at which it will be installed and the location in the building where it will operate. Manufacturers may certify their equipment to a particular level so it is important to check the level to which the equipment of interest is certified. (Equipment should carry a Seismic Rated nameplate, which go into detail about the earned certification.)

Consulting engineers, contractors and owners can minimize risks and liabilities with respect to ensuring a project meets demanding seismic standards by being familiar with evolving code standards, making sure there are well--written  specifications that take into account relevant seismic data for the site, and by specifying only properly certified equipment.