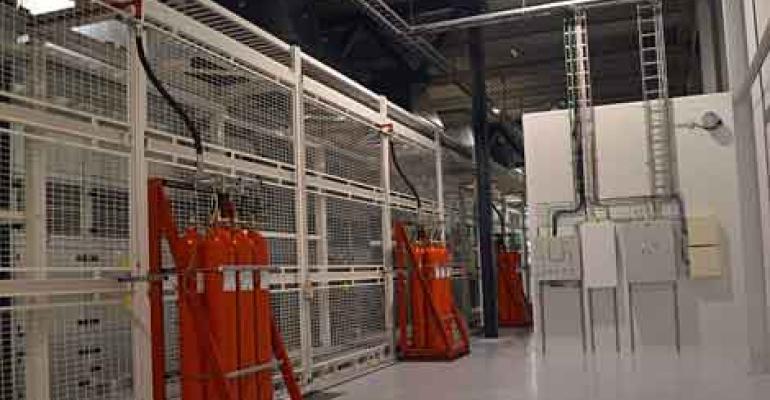 Power equipment room features compressed gas tanks for the fire suppression system, which uses Nitrogen and other gases already in the normal air mix to push oxygen out of the area on fire. In the event of a fire, the tanks would push the oxygen out of the data hall, thus putting out the fire, but giving staff enough time to leave the room if they are working in it at the time. (Photo by Colleen Miller.)
Design

Verne Global's data center on a former NATO base in Iceland is now filling with customers, and will house a data crunching app from RMS, a new tenant of Datapipe, which is launching an online risk management service for insurance providers. 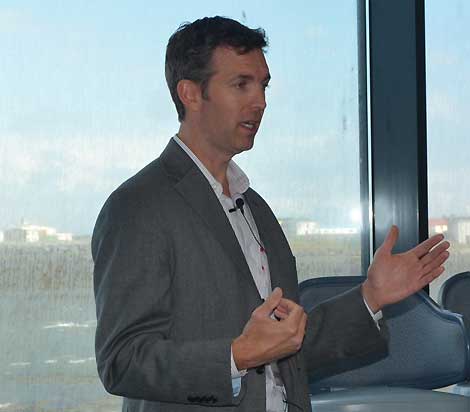 KEFLAVIK, Iceland - Data center customers are warming up to Iceland. It's been five years since Verne Global announced plans to build a data center business in Iceland, which offers nearly ideal scenarios for power and cooling servers. The company's facility on a former NATO base is now filling with customers, with a boost from cloud hosting provider Datapipe.

The latest arrival is RMS, which specializes in modeling catastrophe risk for the insurance industry. RMS will use Datapipe's Stratosphere high-performance cloud to support RMS(one), a new service that combines "big data" analysis and a cloud delivery model to provide insurers with real-time information on the risks posed by natural disasters.

The computing and storage horsepower RMS is housing in Iceland will make it easier for insurers to quickly assess looming disasters. An example: the approach of a hurricane, in which risk models shift along with the path of the storm, in which case the RMS app will need to quickly scale its capacity as many clients simultaneously seek to update their projections.

RMS isn't the only one crunching big data inside the Verne Global facility. Automaker BMW recently moved a group of applications to Verne Global, including crash simulations, aerodynamic calculations and computer aided design and engineering for BMW’s next generation of cars.

"We’ve been able to make a lot of headway in the high-intensity computing market," said Tate Cantrell, the CTO of Verne Global. "That’s where we really see the interest."

The success hasn't come overnight for Verne. Shortly after it announced its project, Iceland was hit hard by the global financial meltdown, and Verne postponed construction for a year. Shortly after it began building, ash from a volcano in Iceland disrupted global travel.

Through it all, the Verne team has persevered with its vision for Iceland as a hub for the data center industry, offering an abundance of cheap, green power and low operating costs from the free cooling enabled by the cool climate. As with any new location, the "proof of concept" provided by early customers is critical in building momentum and winning over skeptics.

"We are very happy with the reception we’ve received," said Cantrell. "We’ve gone from literally being heckled, to the point where name brands work with us. We’re just continuing to raise awareness about the opportunity in Iceland. We believe in it. Our customers believe in it. We’ve still got to continue to educate people."

This week Verne, Datapipe and RMS held a press event to discuss the rollout of RMS(one), which allows Data Center Knowledge to provide our readers with a closer look at Iceland as a data center destination. Today and in coming days, we'll take a look at Iceland's current data center industry, the kind of applications being hosted here, and the renewable power resources that power the nation's pitch to server farms.

Iceland's power grid draws entirely upon hydro-electric and geothermal power, ensuring a totally "green" power supply. That's become an issue in the data center industry in recent years, as the environmental group Greenpeace has targeted both Facebook and Apple with high-profile campaigns blasting them for using coal-based electricity to power their servers.

One of the most appealing facets of Verne's green power play is its ability to arrange long-term contracts that can provide predictable power pricing for 12 to 20 years. Power in Iceland is available at 4.5 cents per kilowatt hour, with lower pricing available for bulk purchases. That's an attractive pitch when you consider the potential for fluctuations in power pricing in countries like the U.S., Britain and Germany.

"We are the ultimate energy hedge for companies," said Verne Global CEO Jeff Monroe. "Energy costs are not going down. In most cases, they’re escalating."

While some U.S. utilities offer access to power sourced from renewables, they often charge a higher price for that power.

"We’re green, but without the premium," said Monroe. "Instead, you save money on that hedge.” 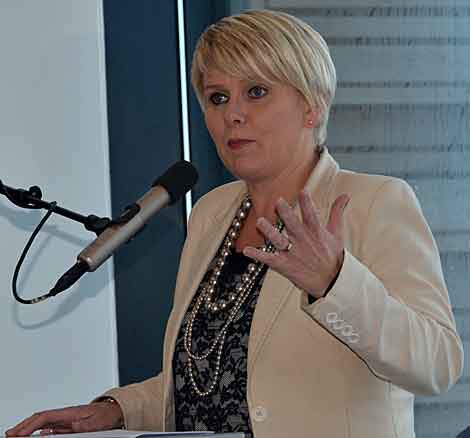 Iceland's cheap and abundant energy has attracted four of the world's leading aluminum companies, who have built smelting facilities that consumed about 10.4 terawatt hours of electricity in 2011 or about 80 percent of the total usage by customers of national utility Landsvirkjun. Iceland has been heavily marketing itself to the data center industry, seeing the potential to attract another energy-intensive industry.

"We see a lot of potential with the data center industry, and it fits well with our goals," said Ragnheiður Elín Árnadóttir, Iceland's Minister of Industry and Commerce. "It’s jobs and it’s a way of selling our energy. We’ve built a large aluminum industry here, and it’s good to diversify.

“The success of Verne has been an inspiration, and gives us hope for future growth of this important industry," she added. "We offer data centers the double benefit of going green while cutting costs. This government is fully committed to ensuring that data centers in Iceland are competitive with those in Europe and the U.S."

Iceland is a land of mountains, rivers and lakes, covered with rocky plains that in some areas resemble a moonscape. In the 1960s, NASA brought the Apollo astronauts to Iceland to study its geology and practice collecting rocks. The country has also provided locations for filming recent science fiction films including Oblivion, Prometheus and Star Trek: Into Darkness.

Verne Global's facility is built on a former NATO military base near Keflavik airport, about a half hour south of the capital of Reykjavik. Verne has combined its energy strategy with the use of modular construction techniques. The data center halls are put together from pre-fabricated modules built at Colt’s factory in northern England, and then shipped 1,000 miles to Iceland and assembled onsite.

Using a modular design allows Verne to quickly assemble data halls within its larger shell. Colt's ftec design creates a 6,000 square foot data hall that can support between 750kw and 1.5 megawatts per hall, depending upon the density requirements of the client. Datapipe houses RMS' equipment inside a cold-containment system with sliding end-doors, similar to those seen in hundreds of traditional data centers.

"We want people to get off the plane and see what they expect to see in a data center on London or New York," said Cantrell.

Vote of Confidence on Disaster Risk

From a site selection perspective, earthquakes and volcanic activity are a problem for many companies. Iceland is located atop the mid-Atlantic ridge, where the North American and European tectonic plates meet. This enables a rich supply of geothermal power, which heats the majority of the homes in Iceland. Many of those houses are made of concrete to provide stability in earthquakes, and the mountains north of Reykjavik provide ample evidence of rockslides from earlier temblors.

But industrial facilities in Iceland are engineered for seismic risk, and the country's power plants and aluminum smelters have not been impacted by a number of earthquakes between magnitudes 6 and 7 since the year 2000.

The arrival of RMS presents an unusual vote of confidence in the disaster profile of Iceland in general and Verne Global in particular. The company is a global leader in risk assessment for insurance companies, and did a thorough search before settling on Datapipe and its Iceland facility for its disaster recovery node. The company's perspective on seismic risk in Iceland was addressed by Robert Muir-Wood, the Chief Research Office for RMS and a leading authority on natural science and catastrophe risk.

"We know quite a lot about earthquakes and volcanoes in Iceland," said Muir-Wood, a contributor to the Intergovernmental Panel on Climate Change (IPCC) that shared the 2007 Nobel Peace prize with Al Gore.  "The local earthquakes here are small and shallow. There is not really a significant earthquake threat to the (Verne Global) facility. As for volcanoes, there might be some ash dropped but we have good filtering."

Verne Global believes that the business case for placing data centers in Iceland will become more compelling over time. The company's executives say they are seeing strong interest from customers in Germany and the U.K., and believe the publicity around new data center projects in the Nordic cpountries for Facebook, Google and Microsoft will further boost interest in Iceland.

“If green is less expensive, why would you not do that?” said Monroe.