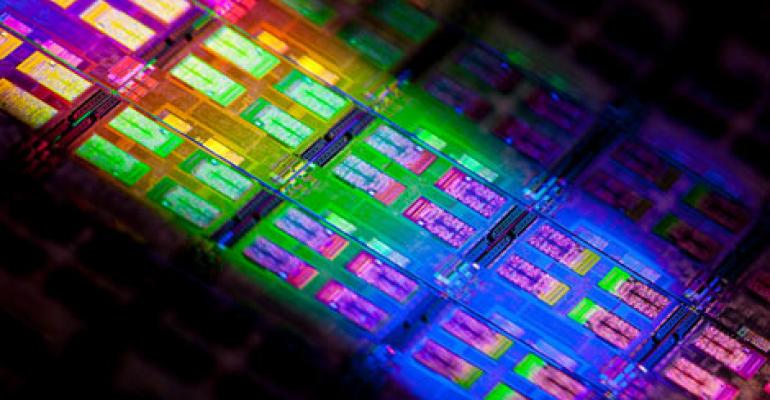 Intel has unveiled the new Atom C2000, a low-power chip designed to bring the power efficiency of mobile phones into the hyperscale environments of cloud data centers. Intel says the new chip will allow it expand in markets for microservers, cold storage and entry-level networking technology. 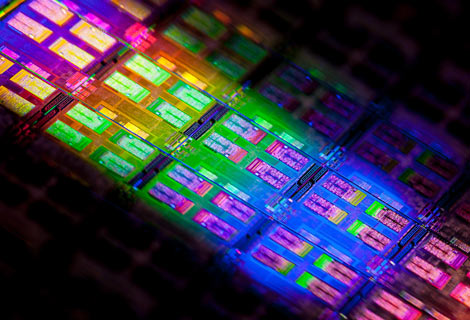 Wafers for the new Intel Atom C2000 processor, which was launched today and is available in 13 different configurations for specialized computing tasks. (Photo: Intel)

Intel is bringing its low-power Atom chips to the cloud. Today the chipmaker announced the commercial availability of products based on the new Atom C2000, a low-power chip previously known by the codename Avoton. The new chip is designed to bring the power efficiency of mobile phones into the hyperscale environments of cloud data centers.

Intel said the new 22nm chip will also allow it to expand into areas such as cold storage and entry-level networking, which loom as growth markets as data center operators look beyond servers to improve power efficiency across their entire infrastructure.

“As the world becomes more and more mobile, the pressure to support billions of devices and users is changing the very composition of data centers,” said Diane Bryant, senior vice president and general manager of the Datacenter and Connected Systems Group at Intel. "With the Atom C2000, we are signaling Intel's shift from general-purpose solution delivery to optimized, targeted products that address a range of specialized workloads to delvier greater efficiency to the data center."

Bryant said Intel is driving "a fundamental transformation of the rack" in which high-speed networking provides data center designers with new options to distribute components and workloads.

The Atom C2000, formerly code named Avoton, is positioned as low power, and application optimized for data centers and communications. It is Intel's second generation 64-bit server SoC, manufactured using a 22nm process, and is the first processor based on the next generation Silvermont architecture. With a focus on high density and high performance, this Atom processor will continue Intel's drive into the micro server markets and cloud service provider architecture, and extend it into new segments. As a scalable building block, Intel is looking to fit the Atom into new markets such as cold storage, routers and switches, network security appliances, and many other areas.

"What we have seen is the emergence of new applications at the low end of compute," said Bryant, citing use cases like memcached and cold storage that require a combination of high density and low compute power.

Within the Atom Series-C processor family the configurations are highly optimized for the target workload - ranging from 2 cores and 6 watts for entry level web hosting, 4 cores and 9 or 14 watts for cold storage, and 8 cores and 12 or 20 watts for front end web tier (scale-out workloads). With the Silvermont modular design, the AtomC2000 can have 2 to 8 Silvermont cores, with shared 1MB L2 per module, or 4MB. Avoton supports up to 2 channels of DDR3/DDr3L memory, with 25.6GB/s of peak bandwidth.

Not just a typical iteration above last year's Centerton, the new Avoton with additional SoC functionality takes a large leap forward in power efficiency - with as much as a 65 percent improvement over the previous generation. It also adds jumps from 8GB of memory to 32GB, and includes  integrated NIC, SATA and USB. Here's a look at Intel's slide summarizing the capabilities of the Atom C2000: 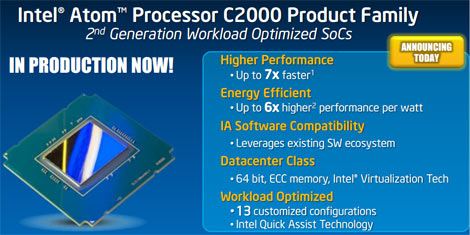 Next: The Disaggregated Rack
< !nextpage-->

With changes in technologies binge incorporated into the chip, and platform enhancements to ensure high density and low power, the data center rack itself is a final area for Intel to address. Intel has visions for replacing the traditional data center rack, as evidenced by the Scorpio rack scale architecture, and Intel's involvement in the Open Compute rack design. Intel's disaggregated rack environment includes Intel processors and SoCs, distributed switching with Intel switch silicon, and interconnects based on Intel silicon photonics technlogies.

At the Intel Re-architect the data center event this past summer Rackspace was noted as one of the first commercial deployments of the OpenCompute rack scale implementations.The micro server and disaggregated rack have also been featured in Intel partnerships with HP's Moonshot, which is expected to have the new Atom C2000 processor, and with Quanta Computer in building out the new Intel photonic rack architecture.

The Atom C2000 chips (Avoton and Rangeley) are available now. They will be followed in 2014 with code name Denverton processors, using Intel's 14nm process and further build upon the performance and efficiency gains ihn the 22nm  Avoton.

The Intel Atom C2000 product family is shipping to customers now with more than 50 designs for microservers, cold storage and networking. The products are expected to be available in the coming months from vendors including Advantech, Dell, Ericsson, H*, NEC, Newisys, Penguin Computing, Portwell, Quanta, Supermicro, WiWynn, Tyan, ZNYX Networks. Here's a look at some of the areas these vendors are targeting with their new C2000-based offerings: 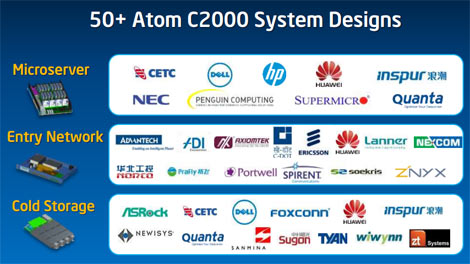