CyrusOne is adding a third facility to its Houston campus. It is the largest and most and innovative center of excellence for seismic compute services infrastructure in the world with a total power capacity approaching 100 megawatts and more than 1 million square feet of data center 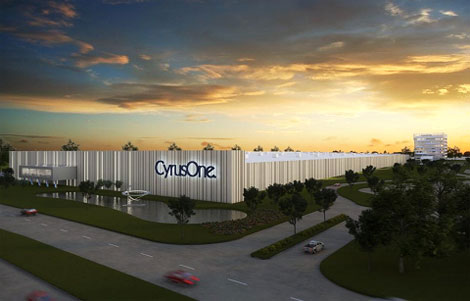 CyrusOne has another major expansion underway at its Houston campus. A third data center is being built on the 45-acre parcel land located along Beltway 8 in Houston’s energy corridor. The company is building on its strong market position with the oil and gas industry – and continual expansion indicates that this position grows strong by the day. The company anticipates breaking ground on the expansion early next year.

The company acquired 32 acres adjacent to its Houston West facility last April, and the 45-acre total campus is growing like wildfire. Upon completion, the Houston campus will have total power capacity approaching 100 megawatts and more than 1 million square feet of data center and 200,000 square feet of Class A office space.

“CyrusOne’s Houston West campus is well known as the largest data center campus for seismic exploration computing in the oil and gas industry,” explained Kevin Timmons, chief technology officer at CyrusOne. “By continuing to apply our Massively Modular design/build approach and high-density compute expertise, the new facility will allow us to serve the growing number of oil and gas customers who are demanding best-in-class mission-critical infrastructure.

"The 200,000 square feet of Class A office building will enable us to expand the ecosystem for facilitating research and development of geophysical exploration data by providing office space for employees of the world’s leading oil and gas companies as well as academicians from the leading universities that are all involved in conducting petrochemical analytical research," said Timmons.

This is the largest seismic exploration computing campus in the U.S. The company is building on its strong market position with the oil and gas industry, as CyrusOne does business with nearly all super-major and major oil and gas firms worldwide. The campus is attracting significant research and development investment to the Houston area as more companies and countries look to expand their exploration expertise, notably in the newer hydraulic fracturing (“fracking”) procedures.

The company also developed a high-performance computing (HPC) cloud solution specifically for the oil and gas industry. It’s been a whirlwind 2013 thus far for CyrusOne. There was a sizeable Houston land grab in April, and this new facility shows that the campus is growing gangbusters.

Also this year, the data center service provider completed its IPO, and reported record sales and leasing in its first earnings report as public company. The company, which was spun off from parent Cincinnati Bell, is said to be looking at new markets and could expand through acquisition, according to executives earlier this year.

The company is killing it in Texas, also growing in San Antonio, leasing all of its space in an existing facility to a single customer and building out another 200,000 square foot data center there that will also sell out.  It’s seeing massive growth in Dallas as well. Texans like to build big. And perhaps no company knows the Texas market better than CyrusOne

The company’s ‘massively modular’ approach to building data centers means it can cost effectively deliver space in record time, and the demand has it continuously building. Just look at the juggernaut that is Houston, which is about to cross the 100 megawatt mark. Business is big in Texas.

CyrusOne customers can go beyond the benefits of a single data center and architect a data center platform for their production or disaster recovery solution using multiple, connected data centers. It’s ripe for the Fortune 500 to architect data center platforms that meet the disaster recovery requirements of Sarbanes Oxley, HIPAA, PCI, Nasdaq, NYSE and many other regulatory frameworks because they can ensure their data is protected and accessible 100 percent of the time across multiple sites located throughout the country. This represents a true paradigm shift in the way companies are managing the creation, access and sharing of their data.

Moreover, the CyrusOne National IX provides customers with the opportunity to drive additional revenue by improving their immediately addressable market, to reduce expenses with a lower-cost option for point-to-point connectivity between data centers, and to improve service quality through higher levels of resiliency.

CyrusOne operates 25 carrier-neutral data center facilities across the United States, Europe, and Asia that give customers the flexibility and scale to perfectly match their specific growth needs. The company is renowned for exceptional service and for building enduring customer relationships and high customer satisfaction levels. Customers include nine of the global Fortune 20 companies and more than 100 of the Fortune 1000.