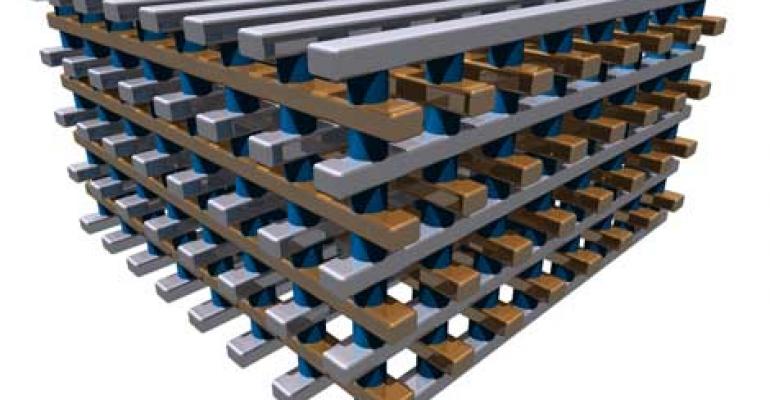 Startup Crossbar has come out stealth with a chip representing a new class of 3D RRAM which can be incorporated into a standard manufacturing fab.
Design>Storage

Crossbar Emerges From Stealth, Packing 1TB Into a Single Chip

Start-up company Crossbar came out of stealth mode Monday with an announcement that it has created a new category of memory that is capable of storing 1TB of data on a single chip. 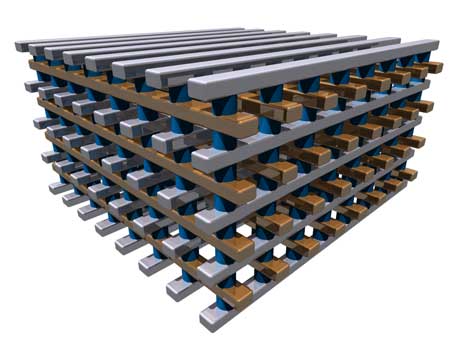 Startup Crossbar has come out stealth with a chip representing a new class of 3D RRAM which can be incorporated into a standard manufacturing fab.

Start-up company Crossbar came out of stealth mode Monday with an announcement that it has created a new category of memory that is capable of storing 1TB of data on a single chip. Crossbar's Resistive RAM (RRAM) technology is a new generation of non-volatile memory that is capable of storing up to one terabyte on a 200mm2 chip, the size of a postage stamp.  The company also announced it has developed a working Crossbar memory array at a commercial fab.

Due to its simple three-layer structure, Crossbar technology can be stacked in 3D, delivering multiple terabytes of storage on a single chip. Its simplicity, stackability and CMOS compatibility enable logic and memory to be easily integrated onto a single chip at the latest technology node. When compared to NAND Flash memory Crossbar's technology delivers 20 times faster write performance, 20 times lower power consumption and 10 times the endurance. With these performance levels the company believes it can enable a new wave of electronics innovation for consumer, enterprise, mobile, industrial and connected device applications.

“Non-volatile memory is ubiquitous today, as the storage technology at the heart of the over a trillion dollar electronics market – from tablets and USB sticks to enterprise storage systems,” said George Minassian, chief executive officer, Crossbar, Inc. “And yet today’s non-volatile memory technologies are running out of steam, hitting significant barriers as they scale to smaller manufacturing processes. With our working Crossbar array, we have achieved all the major technical milestones that prove our RRAM technology is easy to manufacture and ready for commercialization. It’s a watershed moment for the non-volatile memory industry.”

The Crossbar memory cell is based on three simple layers: A non-metallic bottom electrode, an amorphous silicon switching medium and a metallic top electrode. The resistance switching mechanism is based on the formation of a filament in the switching material when a voltage is applied between the two electrodes. This simple and very scalable memory cell structure enables an entirely new class of RRAM, which can be easily incorporated into the back end of line of any standard CMOS manufacturing fab. Crossbar plans to bring to market standalone chip solutions, as well as license its technology to system on a chip (SOC) developers for integration into next-generation SOCs.

“RRAM is widely considered the obvious leader in the battle for a next generation memory and Crossbar is the company most advanced, showing a working demo that proves the manufacturability of RRAM," said Sherry Garber, Founding Partner at Convergent Semiconductors. This is a significant development in the industry, as it provides a clear path to commercialization of a new storage technology, capable of changing the future landscape of electronics innovation.”