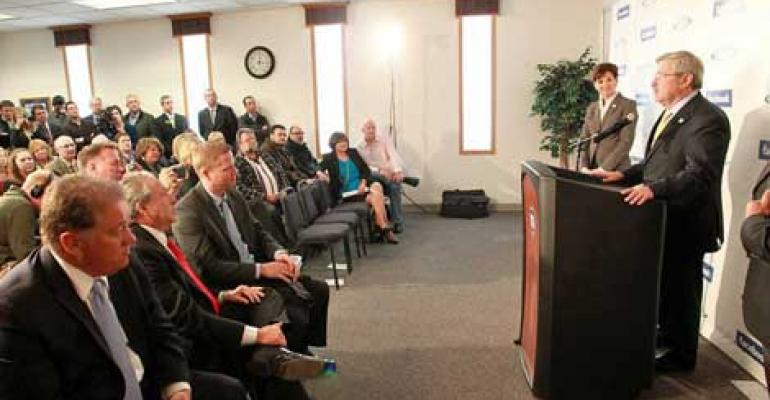 It looks like Nebraska and Iowa are squaring off again. Economic development agencies in the two states, which have scrapped often over data center deals, appear to both be pursuing a large project with the codename "Project Oasis."

It looks like Nebraska and Iowa are squaring off again. The two Midwestern states have battled often over major data center projects, most recently the Facebook "Project Catapult" server farm that will be built in Altoona, Iowa.

Now the economic development agency in Nebraska is once again pursuing a large project, this time with the codename "Project Oasis." Omaha.com has the details on the mystery company's interest in a site near Springfield in Sarpy County.

Nebraska has been a finalist in large projects for Google, Microsoft and Facebook, all of which wound up going to Iowa. The exception has been Yahoo, which built a major production data center outside of Omaha. It looks like this latest project will also shape up as a Iowa-Nebraska showdown, as a large "codename" company was scouting sites earlier this year in Altoona, Iowa near the new Facebook site. The codename? Project Oasis.

Large companies conducting data center site selection searches commonly scout multiple states in order to have several options. Working with multiple states also allows the prospect to gain negotiating leverage, as it seeks incentives from each states and then pits the economic development pitches against one another.

If "Project Oasis" sounds familiar, it's because it has been used as a codename before: In a 2010 project by Verizon Communications, which was weighing a huge project in upstate New York on the shores of Lake Ontario.

That Verizon project didn't work out, as it met with resistance from local residents, and Verizon opted to buy rather than build as it acquired Terremark for $1.4 billion. But you don't suppose they'd just recycle codenames? Hmmmm ...

In any event, we'll continue to track this project in whichever state it lands.