How efficient are high performance supercomputers? With the June publication of the Green500 and Top500, it’s time to update the Exascalar analysis, which is a way to look simultaneously at efficiency and performance trends of the world’s leading supercomputers.

Winston Saunders has worked at Intel for nearly two decades and currently leads server and data center efficiency initiatives. Winston is a graduate of UC Berkeley and the University of Washington. You can find him online at “Winston on Energy” on Twitter

With the recent publication of the Green500 and Top500, it’s time to update the Exascalar analysis. You may recall that Exascalar is a way to look simultaneously at efficiency and performance trends of the world’s leading supercomputers. 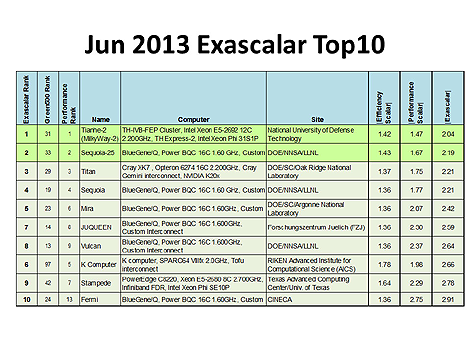 The Performance Efficiency scalar analysis as shown in Figure 2 below shows all the characteristics of the Exascalar Taxonomy I discussed previously: the now-familiar triangular shape, the (somewhat stretching) power wall, and in the lower right the innovation doorway, where emergent high efficiency systems first come onto the scene (in this case the Green500 leader, CINECA’s Eurora system based on Xeon and NVidia GPUs). 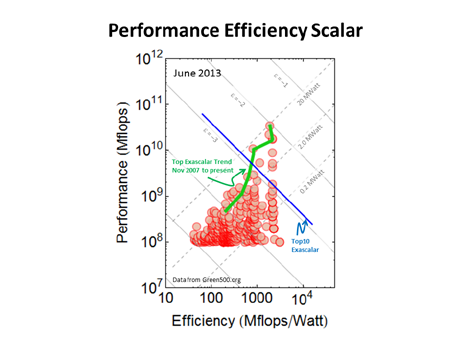 Those familiar with Exascalar will notice a slight change in the graph. The concentric circles of previous Exascalar analyses are replaced by straight lines. This change results in only very small changes to the Exascalar values (for the leading system less than 0.1 percent), simplifies calculation, improves long term “Exascalability.” I’ll write more about the changes to Exascalar in a subsequent blog.

The blue Top10 Exascalar line is now inside ∈ = -3 for the first time. The green trend line, showing the evolution of the Top Exascalar system since November 2007, reveals the close parametric relationship between supercomputing leadership and Exascalar. While the leading system for June 2013 took a small backward step in efficiency, the overall gain in performance (at the expense of increased power) improved Exascalar.

The fit parameters of the historical Exascalar Trend continue to show an increase of about 0.35 per year (or a factor of about 2.3), consistent with the June 2012 trend. The Top Exascalar fitted line intercepts zero near April 2019. However, without breakthroughs to increase the rate of efficiency increase above historical levels, the trend will become increasingly difficult to maintain due to power costs. 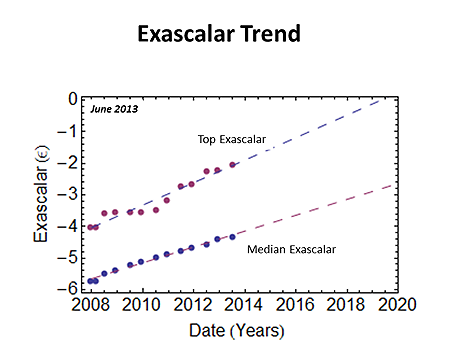 Which brings us back to our theme, the performance push to high efficiency. Overall, Exascalar continues to reflect the amazing progress being made in supercomputing. The fact that Exascalar reflects mostly performance differentiation of systems proves the indispensability high efficiency in high performance. However, as we can see from the trends, even greater pushed in efficiency are required; without more breakthroughs, the current Exascalar march appears to be at risk as power limitations start imposing themselves

As I mentioned above, I’ll review some of the thinking behind the (minor) changes in the way Exascalar was calculated in my next blog. Until then, let me know your comments, questions, or concerns below.

Winston previously wrote on Exascalar from November 2012, Supercomputing & Efficiency: November 2012 Exascalar, Part II and The Taxonomy of Exascalar in January.