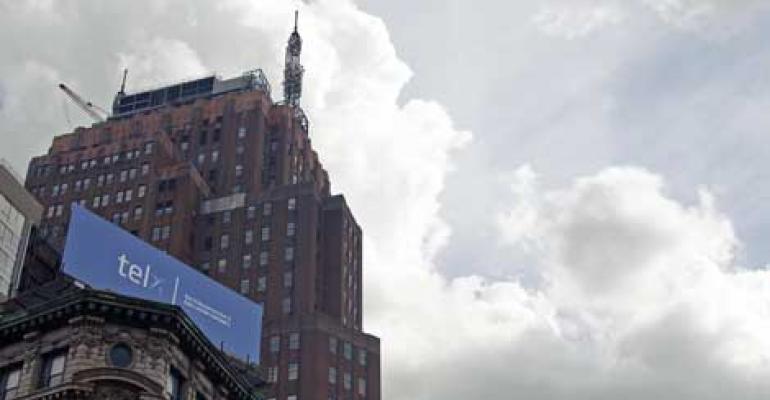 Telx is expanding to a third major telecom hub in New York City, leasing a floor of space at 32 Avenue of the Americas in Tribeca, where it will also manage the building's Meet-Me-Room (MMR) for landlord Rudin Management. 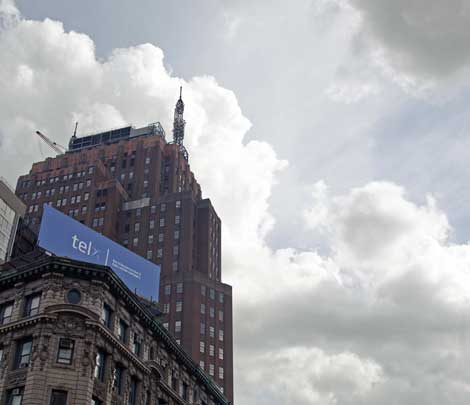 The 27-story data hub at 32 Avenue of the Americas is framed by the cloudscape over Manhattan. Also visible in the forground: A billboard for Telx, the building's newest tenant and Meet Me Room operator. (Photo: Telx)

For Telx, the shortest path to the cloud runs through the skyscrapers of Manhattan. The fast-growing provider is expanding to a third major telecom hub in New York City, leasing a floor of space at 32 Avenue of the Americas in Tribeca, where it will also manage the building's Meet-Me-Room (MMR) for landlord Rudin Management.

The new facility continues a major expansion for Telx in the New York market, where it now operates six data centers. Telx is already a major player at the city's two largest carrier hotels at 60 Hudson Street and 111 Eighth Avenue. and now adds a third base of operations at 32 Avenue of the Americas, a historically important telecom hub. The colocation and interconnection specialist also operates three data centers in northern New Jersey, with a facility in Weehawken and two data centers in Clifton, including a brand new $200 million greenfield project.

Once the new NYC3 data center comes online in the second quarter of 2014, Telx will operate a total of 550,000 square feet of data center space in the greater New York market.

“New York City has always been Telx’s backyard, and although we have expanded throughout the country in recent years, we always remain focused on providing unparalleled network connectivity and datacenter solutions within the New York City metro area," said Chris Downie, President and Chief Financial Officer for Telx. "The establishment of NYC3 at 32 Avenue of the Americas provides Telx’s clients and prospects with a comprehensive connectivity solution and another option for expansion in New York City that is equal to the expertise and operational compliance that Telx delivers at NYC1 and NYC2."

The deal brings together two veteran players in the Manhattan telco landscape. The Rudin family bought its first property in Manhattan in 1902, and has built a portfolio spanning 14 million square feet of space, including some of the city's premier commercial properties. While its legacy is somewhat briefer, dating to 1992, Telx was a pioneer in developing the market for telecom services at 60 Hudson Street and has since expanded nationally across 20 sites.

The new Telx NYC3 data center will be a 72,000 square foot facility occupying the entire 10th floor of 32 Avenue of the Americas, with an option to expand to "multiple additional floors" in the building. Telx will also manage and operate the HUB, the building's carrier-neutral meet me room. The Rudin organization has a strategic vision for the HUB to aggregates voice, data and wireless service providers in a single network dense facility.

"We’re proud to be partnering with Telx on this exciting and innovative venture at 32 Avenue of the Americas, which is widely acknowledged as among the world’s most user-friendly centers for telecommunications, technology and media firms," said William Rudin, Vice Chairman and CEO of Rudin Management. "This partnership further demonstrates 32 Avenue of the Americas and New York City as a technology and media center. As technology needs continue to grow in New York, the infrastructure will be there to meet the growing demands.”

Telx will offer its portfolio of interconnection services, and will tie all three Telx NYC metro facilities together via the Telx Metro Cross Connect network. It will also offer both "on island" network diversity with "off island" options with Tier III environments outside the 500-year flood plain.

32 Avenue of the Americas also offers line-of-sight advantages for point-to-point microwave data transmission, which are of growing interest as a low-latency connectivity option for high frequency traders with gear at the major financial data centers in the New York area.

32 Avenue of the Americas was built in 1932 by AT&T, and for many years was one of the city’s critical communications hubs, along with the Western Union building at 60 Hudson Street. The 27-floor, 1.15 million square foot property was purchased by the Rudin Organization in 1999. The building’s existing 40+ key participants and 90+ network service providers has established the initial infrastructure to attract other cloud service providers.