Velocity is is an O’Reilly event focused on the fast-growing DevOps movement, and the challenges of making really big sites run really fast. Here's some of the hot topics from this week's conference. 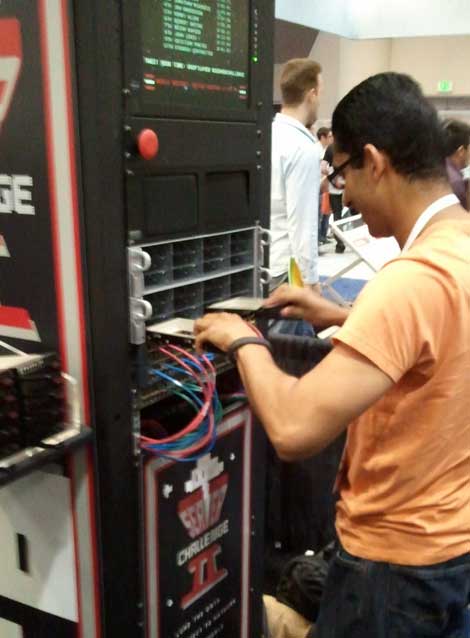 The exhibit hall featured demo from vendors as well as the chance for attendees to get "hands on" as well. The Softlayer server challenge was popular among participants. (Photo: Rich Miller)

Velocity is is an O’Reilly event focused on the fast-growing DevOps movement, and the challenges of making really big sites run really fast. Here's some of the hot topics from this week's conference:

Stop Shaving That Yak, and Make Your App Faster! - The discussion at Velocity focused on culture as well as code. Like “yak shaving,” a geek-speak practice highlighted by a presentation by Mandi Walls, a senior consultant at Opscode. Yak shaving is a term that originated in an episode of  ”Ren & Stimpy” and was later popularized in writings by MIT researchers and author Seth Godin. It involves layering complexity and activity atop a process. Do programmers do this? You bet.

The Web Has an Image Problem: How Photos Can Be Faster - The web is filled with photos. Even as they touch and entertain us, these photos fill up storage arrays and the pipes that power the Internet. The explosion of mobile devices and high-resolution screens has meant more photos and bigger photos. For web performance engineers, optimizing photos to load quickly has become a major priority.

Highlights From Velocity 2013 - Check out our photo gallery of scenese from the conference. Speakers included those from the mega-scale computing community, such as Google or CDN Akamai, but also represented were the vendors and entrepreneurs who develop tools to support the goals of IT and devops teams, and ultimately, the business goals’ of their organizations.