A new class of cache-based storage acceleration via server-based flash integration, known as a Caching SAN Adapter, is the latest innovation in the market. Caching SAN adapters use flash-based technology to address the business-critical performance requirement, while seamlessly integrating with the existing spinning disk storage infrastructure. Caching SAN adapters leverage the capacity, availability and mission-critical storage management functions for which enterprise SANs have historically been deployed.

Adding large caches directly into servers with high I/O requirements places frequently accessed data closest to the application, “short stopping" a large percentage of the I/O demand at the network edge where it is insensitive to congestion in the storage infrastructure. This effectively reduces the demand on storage networks and arrays, improving storage performance for all applications, (even those that do not have caching enabled), and extends the useful life of existing storage infrastructure. Server-based caching requires no upgrades to storage arrays, no additional appliance installation on the data path of critical networks, and storage I/O performance can scale smoothly with increasing application workload demands.

To verify the effectiveness of a Caching SAN adapter, Oracle’s ORION workload tool was used to mimic and stress a storage array in the same manner as applications designed with an Oracle back-end database. Within the test, the Caching SAN adapter displayed the required performance scalability – 13x IOPS improvement over non-cached operations – to support the unique requirements of virtualized and clustered environments such as Oracle RAC. 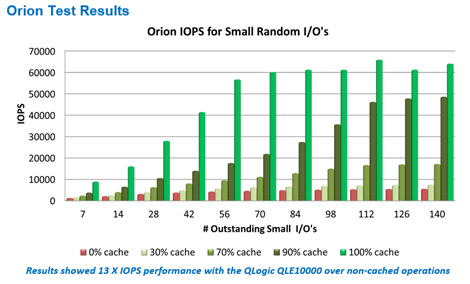 In order to support solutions spanning multiple physical servers (including clustered environments such as Oracle RAC) caching technology requires coherence between caches. Traditional implementations of server-based flash caching do not support this capability, as the caches are “captive” to their individual servers and do not communicate with each other. While they are very effective at improving the performance of individual servers, providing storage acceleration across clustered server environments or virtualized infrastructures which utilize multiple physical servers is beyond their reach. This limits the performance benefits to a relatively small set of single server applications.

Caching SAN adapters take a new approach to avoiding the drawbacks of traditional caching solutions. Rather than creating a discrete captive-cache for each server, the flash-based cache can be integrated with a SAN HBA featuring a cache coherent implementation which utilizes the existing SAN infrastructure to create a shared cache resource distributed over multiple servers. This eliminates the single server limitation for caching and opens caching performance benefits to the high I/O demand of clustered applications and highly virtualized environments.

This new technology incorporates a new class of host-based, intelligent I/O optimization engines that provide integrated storage network connectivity, a Flash interface, and the embedded processing required to make all flash management and caching tasks entirely transparent to the host. All "heavy lifting" is performed transparently onboard the caching HBA by the embedded multi-core processor. The only host-resident software required for operation is a standard host operating system device driver. In fact, the device appears to the host as a standard SAN HBA and uses a common HBA driver and protocol stack that is the same as the one used by the traditional HBAs that already make up the existing SAN infrastructure.

By clustering caches and enforcing cache coherence through a single LUN cache owner, this implementation of server-based caching addresses all of the concerns of traditional server-based caching and makes the caching SAN adapter the right choice for implementing flash-based storage acceleration in Oracle RAC environments.

The following types of workloads are supported currently: