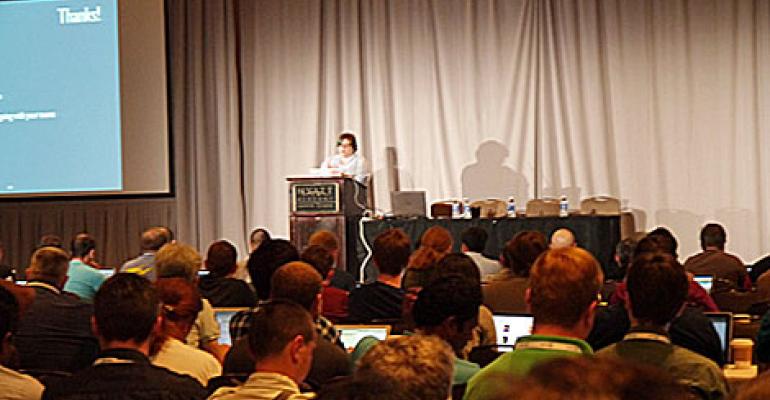 Stop Shaving That Yak, and Make Your App Faster

The Velocity 2013 conference kicked off with jam-packed sessions focusing on DevOps strategies to help make really big sites run really fast. And why "yak shaving" is a bad idea. 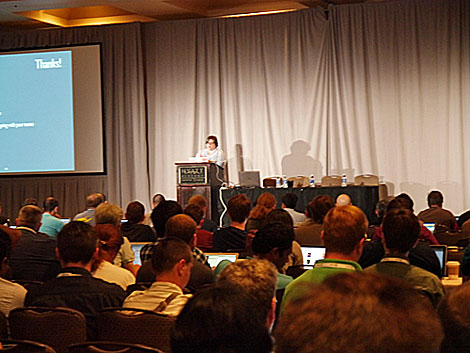 It was a packed room at Velocity 2013 for a morning session on operations from Mandi Walls of Opscode. (Photo: Colleen Miller)

SANTA CLARA, Calif. - You should really stop shaving that yak. Your applications will thank you, and so will the folks who must  keep them running in the future.

That was one of the messages from the kickoff sessions at the Velocity 2013 conference at the Santa Clara Convention Center. Velocity is is an O'Reilly event focused on the fast-growing DevOps movement, and the challenges of making really big sites run really fast.

All three of the morning sessions were jam-packed, with literally standing-room only crowds in each room. It was a working crowd, as nearly every member of the audience had laptops open in front of them. So did the speakers, like Twitter's Marcel Duran, who shared live code demonstrations of how Twitter monitors and manages performance. Duran said the company will open source an internal performance tracking tool called Peregrine (because Twitter uses bird names for projects, and Peregrine Falcons are the fastest-flying birds).

But the discussion focused on culture as well as code. Like "yak shaving," a geek-speak practice highlighted by a presentation by Mandi Walls, a senior consultant at Opscode. Yak shaving is a term that originated in an episode of  "Ren & Stimpy" and was later popularized in writings by MIT researchers and author Seth Godin. It involves layering complexity and activity atop a process - such as when a programming task requires that you first complete a series of precursor tasks that may have little relevance to the end goal.

In IT operations, yak shaving is the end result of customization and organizational siloes, but also a legacy of problematic coding behaviors. Walls said programmers often take pride in creating processes that may be impressive, but difficult for others to replicate. Sometimes "it seems easier to do it yourself," and customize based upon tribal knowledge -critical expertise that is not widely shared.

That's one of the challenges being addressed by DevOps, which combines many of the roles of systems administrators and developers. The movement was  popularized at large cloud builders with dynamic server environments that required regular updating - which in turn placed a premium on standards and repeatable processes, so that applications could be supported by a team without breaking every time they're updated.

Walls emphasized the need for work to be well documented, repeatable, reliable and "easy to do right." Opscode is one of the leaders in this effort through its backing of  Chef, an open source framework using repeatable code – organized as “recipes” and “cookbooks” – to automate the configuration and management process for virtual servers.

This morning's program kicks off three days of sessions at Velocity, which will feature keynotes and sessions from Google,  Akamai, Etsy, Yahoo, Paypal and Twitter, among others. You can follow the conference on Twitter with the hastag #velocityconf or watch the live feed of keynote sessions Wednesday and Thursday.