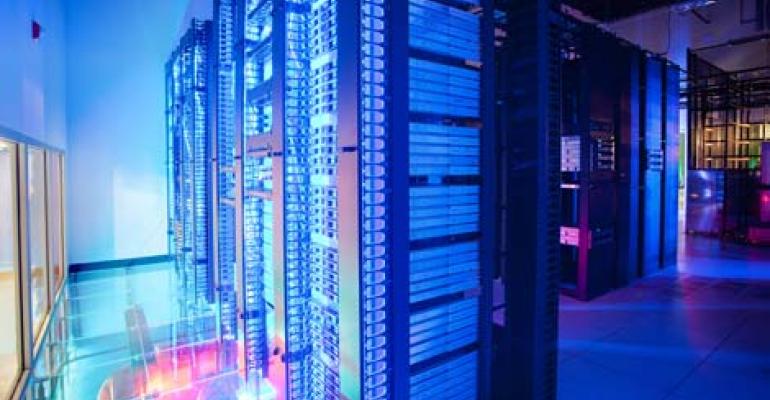 A look at the racks inside a RagingWire data center in Ashburn, Virginia. (Photo: RagingWire)
Companies>RagingWire (acquired by NTT)

RagingWire is making a commitment to invest $150 million and create 50 new jobs at its data center operations in Virginia, allowing the company to qualify for a coveted state sales tax exemption.

The exterior of the RagingWire data center in Ashburn, Virginia. The company has committed to investing $150 million in Virginia and hiring 50 workers in the state. (Photo: Rich Miller)

RagingWire is making a commitment to invest $150 million and create 50 new jobs at its data center operations in Virginia, allowing the company to qualify for a coveted state sales tax exemption. The company said the sales tax exemption on data center equipment will attract new customers to its Ashburn campus and lower its total cost of ownership.

RagingWire has signed a memorandum of understanding (MOU) with the Virginia Economic Development Partnership (VEDP) committing to $150 million in capital investment and the creation of 50 jobs over the next five years. The Virginia incentive program for data centers offers a significant reward in the form of an exemption from the 5 percent sales tax for the purchase of IT equipment and other related infrastructure components.

“We’ve started expanding our facility here in Ashburn,” said Annie George, Product Marketing Programs Manager at RagingWire. “We have to spend $150 million in five years (to qualify), and we were already on that track based on the growth we’ve seen so far.  The investment is a big part of it, and it accelerates growth for our customers. It’s an investment in the state of Virginia. For us, 5 percent is not small when you’re being millions of dollars of equipment at a time.”

A Financial Win For Customers

One of the beneficiaries will be hosting provider DreamHost, which is the anchor tenant in RagingWire's Ashburn facility.

"The Virginia state sales tax exemption that RagingWire has secured for us is a great win for DreamHost, and for developers seeking an on-ramp to the cloud," said Simon Anderson, CEO of DreamHost, which runs DreamCompute, the OpenStack-powered public cloud.  “We now house over one-quarter of our global infrastructure in RagingWire’s Ashburn data center because of their patented power delivery system and 100 percent availability.  The innovative and forward-thinking RagingWire team goes above and beyond in understanding what drives our business success and that of our customers, and engaging in a true partnership for our mutual success.”

This announcement underscores RagingWire’s rapid acceleration in a national expansion plan that includes the launch of its 150,000 square foot data center in Ashburn, Virginia in 2012, the acquisition of 78 additional acres of land in Ashburn for development starting in 2014, and continued expansion of its massive data center campus in Sacramento, California.  RagingWire’s Ashburn data center customers can benefit from this expansion by applying for the Virginia sales tax exemption with RagingWire.

“Our agreement with the VEDP strengthens our commitment to the local business community and encourages companies looking for data centers and colocation in Virginia to consider the many benefits of choosing RagingWire," said Mark Morrow, chief financial officer at RagingWire. “Equally as important are the tangible financial benefits that our customers gain from this agreement, as it promotes their growth from within our facility.”

Virginia Governor Bob McDonnell helped cut the ribbon on RagingWire’s Ashburn data center and was a strong advocate for the sales tax exemption.

"Virginia has earned a reputation as one of the most business friendly states in the country and our Sales and Use Tax Exemption Program for Data Centers enhances that position," said McDonnell. "We commend RagingWire and its customers for ‘putting Virginia to work’ by utilizing this important incentive that creates good jobs for our citizens."