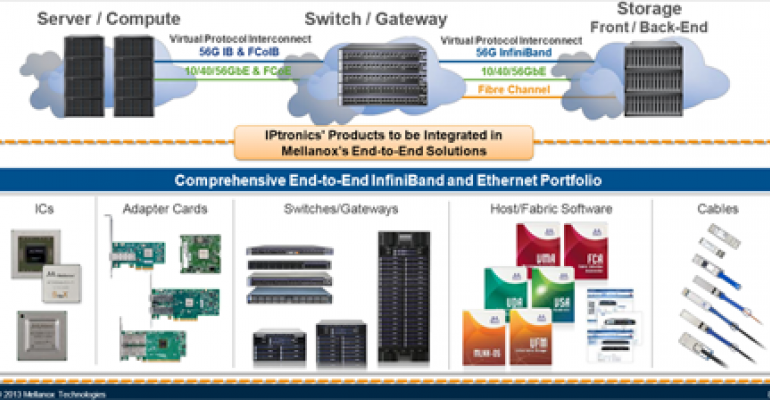 A slide from Mellanox shows how the IPtronics products will be integrated end-to-end.
Design>Networks

A slide from Mellanox shows how the IPtronics products will be integrated end-to-end. Click to enlarge graphic.

The company expects to establish its first Research and Development center in Europe at IPtronics’ current location in Roskilde, Denmark, and further expand its customer support presence within Europe. Also, Mellanox currently intends to retain IPtronics’ existing product lines to ensure continuity for customers and partners.

“The proposed acquisition of IPtronics is highly complementary with our recently proposed acquisition of Kotura. IPtronics’ parallel optical interconnect ICs further solidify our strategy to have a full end-to-end solution for the server and storage interconnect,” said Eyal Waldman, president and CEO of Mellanox Technologies. “The new and emerging Web 2.0 and cloud applications that influence our day to day living depend on fast manipulation of data, which is growing exponentially. Mellanox’s interconnect provides the fastest and most scalable solution for moving data between server-to-server and server-to-storage, allowing the continuous development, use and expansion of these applications.  We expect that the acquisition of IPtronics’ technology and their development team will better position us to continue to offer faster interconnect solutions at 100Gb/s and beyond, with higher-density and lower power at a lower cost.”

Mellanox also announced the availability of the Mellanox Virtual Modular Switch (VMS) solution, an Ethernet data center aggregation switch infrastructure.  It provides up to 720 ports of 40 gigabits per second with latency lower than 2 microseconds while reducing capital expenses by up to 85 percent and power consumption by up to 90 percent. Moreover, Mellanox VMS offers the best-in-class resiliency, maintaining up to over 90 percent of the aggregation bandwidth at the time of a switch failure, compared to traditional chassis-based switches.

“Cloud, Web 2.0, and enterprise data centers which require large aggregation Ethernet switch networks are moving away from legacy modular switches, due to high expenses and rapid obsolescence, to fixed switches that bring scalability and efficiency,” said Gilad Shainer, vice president of marketing at Mellanox Technologies. “The Mellanox Virtual Modular Switch solution, comprised of Mellanox’s 10, 40 and 56GbE switches, enables our customers to achieve a new level of scalability, while future-proofing their investment and reducing expenses.”

The Mellanox VMS solution is constructed by connecting Mellanox’s SwitchX-2 based 40 and 56 Gigabit Ethernet systems connected in a non-blocking topology and managed with the widely-used Puppet and Chef management applications.