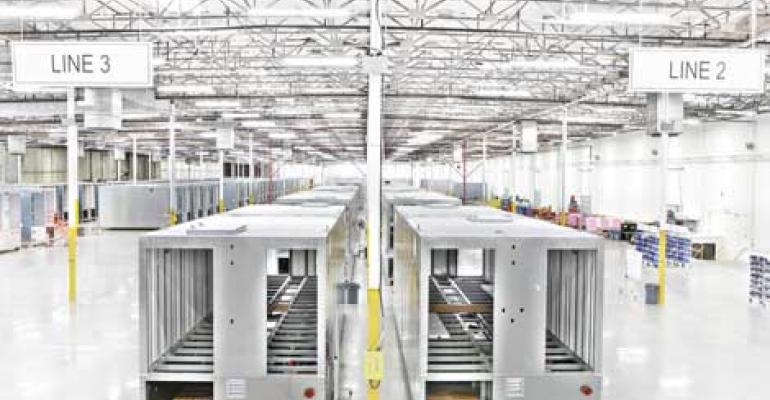 IO is ramping up production of its modular data centers. The company has opened an expanded factory in Chandler, Arizona that will allow it to double its manufacturing capacity. 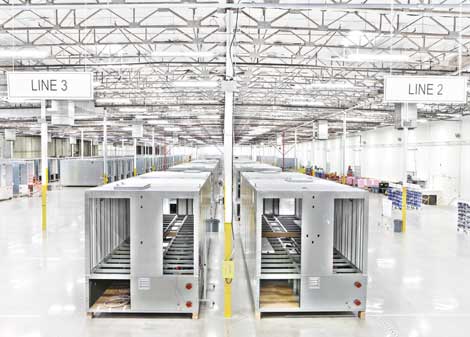 A look at two of the production lines inside IO's modular data center factory near Phoenix. (Photo: IO)

IO is ramping up production of its modular data centers. The company has opened an expanded factory in Chandler, Arizona that will double its manufacturing capacity.

The new facility will help IO meet growing demand for its suite of modular components, which are built in a factory but can be assembled on site to create a fully-configured enterprise data center. The move is part of a global expansion that now spans data centers in Phoenix, New Jersey, Ohio and Singapore, with London soon to follow.

"We can run four simultaneous lines," said Wanger. "It's a much larger campus and we have the ability to expand further."

The factory in Chandler, a suburb of Phoenix, employs more than 100 workers, including industrial and manufacturing engineers,  assembly technicians and specialized technology subcontractors to produce modules on assembly lines.

Each line is manned by 15 to 17 workers, who are spread across work stations where components are installed to support the power, cooling and mechanical systems. Each IO Anywhere unit begins as two half-size module shells, which are put together to form a module that is 42 feet long and about 13 feet in height.

IO uses large air casters – also known as “air skates” – to move the modules move down the production line. The air casters use compressed air to raise heavy loads (similar to a hovercraft) and allow one or two IO staffers to move modules as heavy as  20 tons. When the modules are completed, they are moved to a nearby commissioning area.

"IO continues to lead the global transformation of data centers from a construction to a standardized, just-in-time assembly business," said Troy Rutman, IO's Director of Communications. "IO Factory is the lowest-cost and most rapid data center delivery mechanism in the industry. We are thrilled to be part of bringing manufacturing back to the U.S, and the city of Chandler and its business community have been tremendously supportive."

Even as it builds at home in Phoenix, IO is expanding internationally, including a Singapore data center that will support IT operations for Goldman Sachs and other customers. Despite the cost of shipping modules across the Pacific, Wanger doesn't see IO adding an overseas factory.

"Right now IO and its customers are best served by a centralized U.S. factory," said Wanger. "There's so many savings in centralization and cost control."

Meanwhile, the growth at IO and other modular specialists is eroding the notion that factory-built data centers are a niche product.

"The debate is over," said Wanger. "Our competitors are all identifying, to some extent, that they are approaching construction in a modular way. Standardization and modularity and incremental builds are standard."