A row of equipment at a Cologix data center.
Colocation

Cologix Now Even More Wired at the INFOMART

Cologix focused on connectivity in launching at the Dallas INFOMART, and the company has followed that model as it has expanded, primarily through acquisitions, assembling a footprint in key network hubs in Minneapolis, Montreal, Toronto and Vancouver. 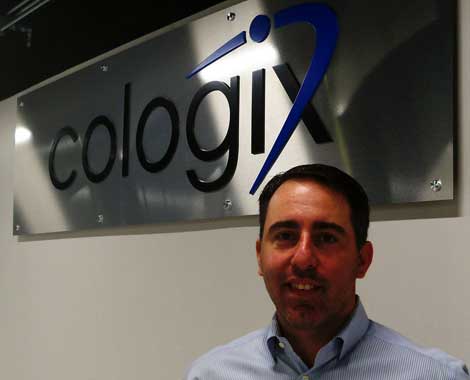 Rob DeVita, the General Manager of Cologix Texas, in the company's new data center space in the INFOMART in Dallas. (Photo: Rich Miller)

DALLAS - The Cologix story is about connectivity, and begins at one of the country's most wired buildings - the Dallas INFOMART. The colocation company got its start in 2010 when it acquired a NaviSite data center on the first floor of the INFOMART, the iconic building on Stemmons Freeway that serves as a major intersection .for Internet traffic.

"We’re going to go where the connectivity is, and that means the major carrier hotels in the central business districts,” said Rob DeVita, General Manager of Cologix Texas. "That’s really our model."

The company has followed that model as it has expanded, primarily through acquisitions, assembling a footprint in key network hubs in Minneapolis, Montreal, Toronto and Vancouver. Cologix now owns 12 data centers across these five markets, and sees a growth strategy in building connectivity ecosystems in second-tier markets.

But it's also thriving in Dallas, where it all started. Earlier this year Cologix opened a new data center on the second floor of the INFOMART, adding 12,000 square feet of space to the 28,000 square feet in its first-floor facility. The new space provides flexibility in supporting customers with a range of power density requirements.

“The beauty of this facility is that we can have telco here (on the first floor) and then high-density clients upstairs,” said DeVita.

To support those high-density clients, Cologix is using a data center design featuring hot-aisle containment, combined with in-row cooling products from APC by Schneider. When warm air from server exhaust enters the hit aisle, it is recirculated through the cooling units, which are spaced out along each row of cabinets, and then returned into the cold aisle. This approach provides flexibility in a multi-tenant environment where customers may have diverse IT gear residing in adjacent cabinets.

"It allows us to put a 15 kW cabinet next to a 2 kW cabinet and not have any problems," said DeVita, who says Cologix will use this approach in all of its new data center space. While the design requires some additional up-front investment, it provides lower operating costs on an ongoing basis, he said.

Cologix is building a significant presence in Montreal, where it has six data centers and hosts the newly-opened Quebec Internet Exchange (QIX). "With access to eight million Quebec residents, and with 2 million households with fixed line broadband subscriptions, Montreal is the natural home for the new Quebec Internet Exchange,” said Sylvie LaPerriere, Chairperson of the QIX and Program Manager for Peering and Content Distribution at Google. "QIX represents a critical step towards creating a more robust domestic Internet, not just in Quebec, but across Canada."

Wired at the INFOMART

Cologix hosts similar Internet exchanges in Toronto and Minneapolis. It also continues to add connectivity options in Dallas. Last month network service provider Hurricane Electric established a point of presence (PoP) within the Cologix facilities at the INFOMART. Hurricane operates the world's largest native IPv6 network, which means its network will increase in importance as the shift to IPv6 picks up speed.

The INFOMART has more than 30 carriers in the building, which was built by Trammell Crow in 1985 as a trade center for the IT industry. Its stunning design, which features a glass facade and seven-story atrium, was modeled after London's Crystal Palace, the site of the first World's Fair. In the late 1990s the INFOMART emerged as a primary "carrier hotel" housing telecom firms and data center providers. The building is now owned by DCI Technology Holdings.

"It's the most fiber-dense building you’ll see in the South Central U.S.," said DeVita. But that also means that Cologix isn't alone in offering colocation space at the INFOMART, where the tenant list includes ViaWest, SoftLayer, and colo market leader Equinix.

But DeVita says Cologix has found an opportunity in the wired nature of the INFOMART. As the building's roster of ISP and data center tenants has grown, not all of the cabling has been seamless.

“We’ve wired the building to untangle the mess of trying to do in-suite connections in the INFOMART," said DeVita. "We’ve got multiple diverse routes to all of those suites.”

"People are going to come to the Infomart for the network providers that are here," he added. "The value of the Infomart and its connectivity is the reason people want to be here. We believe the value proposition is pretty strong." 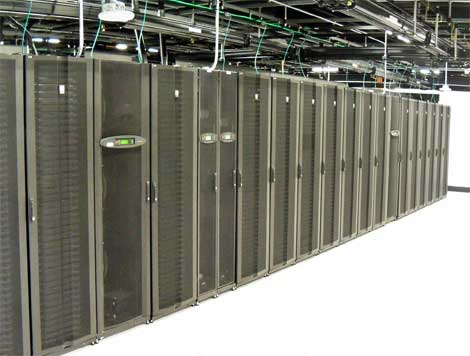 A row of cabinets in the new Cologix data center at the Dallas INFOMART. (Photo: Rich Miller)