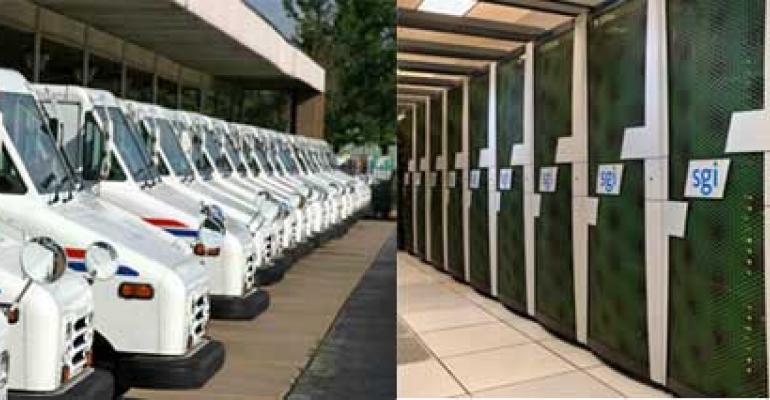 As it processes more than 528 million pieces of mail each day, the USPS has become an active participant in the big data revolution, and operates one of the most powerful non-classified supercomputing databases in the world.

When you think "big data," you probably don't think of the United States Postal Service (USPS). As it processes more than 528 million pieces of mail each day, the USPS has become an active participant in the big data revolution, and operates one of the most powerful non-classified supercomputing databases in the world.

Residing in the Eagan IT and Accounting Service Center in Eagan, Minnesota is the core of the USPS supercomputing operations. The supercomputing and revenue protection program helps to cut fraud on its reported $65 billion in annual revenue. To detect fraud on 528 million pieces of mail each day the USPS started building IT architecture in 2006, and has been expanding it ever since.  Simultaneously processing data from 6,100 mail pieces per second requires some hefty compute power.

"All of this happens in an average of 50 to 100 milliseconds," says Scot Atkins, USPS program manager. "If something is off - a package with insufficient, duplicated or fraudulent postate - it is detected and intercepted in near real-time. A distribution clerk can reassess a package, errors can be tracked down, and fraud attempts - large or small - are reported to the U.S. Postal Inspection Service for further investigation."

The system used to process and detect fraud is impressive. In a recent interview the USPS in-memory database was noted at 16 terabytes, up 6 terabytes from a 2010 Oracle case study report. Coupled with a transactional database it will perform billions of mail piece scans in a standard 15 hour processing day. Real-time scanning performs complex algorithms, powered by a SGI Altix 4700 system. Oracle Data Warehouse keeps fraud results stored in 1.6 terabytes of TimesTen cache, in order to compare and then push back into the Oracle warehouse for long term storage and analysis. Data ingest rates exceed 1.5 million records ingested per second per 16 core blade.

Fighting fraud, waste and abuse is top of mind for USPS and government organizations, as budgets are cut, and billions of dollars are lost in duplicative payments, overpayments and fictitious vendors.