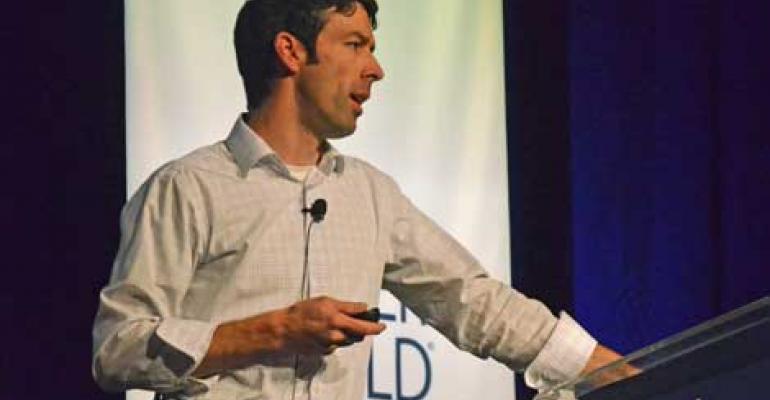 Microsoft is looking deeply into energy efficiency and insists that that its gaze must encompass the entire system - not just on a the level of the data center, but scrutinizing what it takes to create a unit of content. 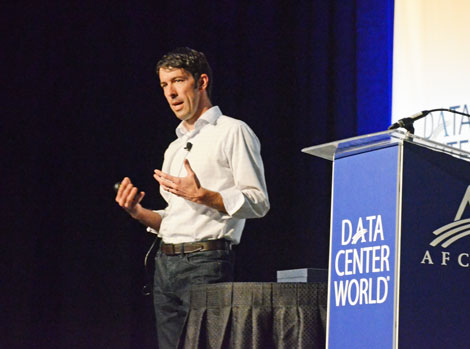 Microsoft's Brian Janous was the keynote speaker at Data Center World Spring 2013, which got underway yesterday at the Mandalay Bay in Las Vegas. (Photo: Josh Ater)

LAS VEGAS - Microsoft is looking deeply into energy efficiency and insists that that its gaze must encompass the entire system - not just on a the level of the data center, but scrutinizing what it takes to create a unit of content.

We are now in an era of centralization, Microsoft Director of Energy Strategy Brian Janous said yesterday in his keynote address at Data Center World Spring 2013 at the Mandalay Bay, drawing many parellels between the data center and energy industries at the turn of the last century.

While the talk was dubbed "commoditization of the cloud," a key theme was the centralization of data that is occurring thanks to cloud, and the efficiencies this is driving in terms of energy - the oxygen of the cloud.

Cloud is driving centralization, which is in turn driving the need for efficiencies. “There’s probably no other industry, at this point, where energy is more critical,” said  Janous.

Janous oversees energy agreements for Microsoft, as well as strategic partnerships to make sure the company's power supply is reliable and sustainable. Joining Microsoft in 2011, his career had largely been focused in the energy sector. Janous believes data center operators must look into the entire supply chain for opportunities. This includes "out of the box thinking" on topics such as fuel cells, methane, solar and everything in between.

“Physicists believe it’s possible to create a perpetual motion machine, if this happens, everything I talk about will be irrevelant,” Janous joked.

What Microsoft is Doing and How They're Doing It

Microsoft has been moving from a traditional box software company to an online services company. Microsoft runs 200 online services worldwide. Office365 is the fastest growing product in the company’s history, Janous said, serving more than 1 billion customers in the cloud. Janous provided a quick snapshot of where Microsoft’s data centers are and noted that the company is still in rapid expansion mode. "“It’s an exciting time to be on the forefront," he said.

The company sees the evolution of efficiency in the data center occurring over five generations. The first was colocation; multi-tenancy to take advantage of scale. The second generation was a focus on density. The third on containment. The fourth generation is modular. The fifth generation is Integration, is this is where Janous says PUE will approach the 1.0 mark.

“Integration is thinking about system on a chip, and it’s a little broader than that. It’s about what it takes to make a data center work. “What integration means is thinking about upstream and downstream value chain and how we optimize it,” said Janous.

In short, efficiency isn’t just about the facility. “Let’s figure it out all the way to creating a unit of content,” said Janous.

Janous spoke of parallels between online services and the energy sector, particularly the electricity sector. “Beyond the dependencies, there are a lot of similarities: large centralized plants, a network, and we have a need to balance supply and demand on a near instantaneous basis,” said Janous. “There’s not a lot of industries that need to do this.”

“On a macro level, I think of the development of the electricity sector and over the last 100-150 years, it developed as starting as bunch of components, and then became centralized in plants. This is what we’re seeing in data centers these days.”

Janous notes that there were roughly 50,000 power plants distributed across the United States at the turn of the previous century. "Businesses didn’t trust utilities," he said. "Then we had a massive revolution, not just on the tech side, but the business side. Centralization meant you could spread costs over customers, driving costs down and driving up demand."

Centralization is not an easy transition. There are PR issues; Janous referred to the recent NY Times article that was quite critical of the data center industry. While there is some value in pointing out inefficiencies, it’s more important to point out efficiencies that are gained through centralization. What was once being done in a small closet in a wasteful manner is now centralized in a data center. “the industry has done a really good job working together, and in some ways policing itself. I think it’s pretty impressive in what’s been done,” said Janous.

“Now that we have the data in place, the infrastructure in place, we can centralize,” said Janous. “We’ll never completely centralize it, but there’s a significant movement in this direction that is causing this massive growth in the number of data centers being built and data created.”

To illustrate the growth in demand, Janous uses the example of his daughter using a tablet to stream Netflix every weekend morning. This generation is growing up in a world where they can get what they want, when they want it. “It’s amazing to think that there’s a generation where this is where they start,” said Janous. “How much data will they create?”

While the data revolution is giving people the ability to create all kinds of ‘crap’ (think of all the bad pictures uploaded to the cloud from millions of family trips), it’s also giving scientists and thinkers the power to solve problems in collaborative ways. Centralization is allowing data to be present on any device, on any screen. “Ultimitely, what this means is we’re creating a tremendous amount of data,” said Janous. “we need to continue to drive forward these efficiencies.”

Energy and The Data Center

After drawing parallels between data centers and the energy industry, Janous delved into what Microsoft has been doing to drive up efficiencies. Energy efficiency needs to be improved at the facility, at the server, and at the application. "There’s tremendous opportunity to make it efficient across the entire chain," said Janous. “Let’s figure it out all the way to creating a unit of content.”

The challenge the industry hasn’t quite cracked, according to Janous, is the reuse of data center waste heat. “We’re looking at things like can we make the servers run hotter? Can they be used for home heating? Etc. There is a lot of technical challenges, but this is something Microsoft is working on,” said Janous.

“My focus lately has been on this upstream piece of it. The upstream component, what is that opportunity we have to capture more useful electricity? We’re trying to create a model that looks at the entire system, a system of levers that we can pull to create a cost efficiency frontier,” said Janous.

This has been a larger goal in the industry as of late, with both eBay and Facebook trying to be more transparent when it comes to energy efficiency.  “We want this tool ultimately to be, not just for us, but to have a dialog with the industry,” said Janous. “We want to show you where you need to be for certain things to make sense – like when does fuel cells make sense?”

Certain things are valuable because of scale, “but if you build the world’s greatest engine, but nobody can afford it, what good is it?” said Janous. "Sustainability has to scale."”

"We’re getting to the point where the electricity infrastructure in this country is fragile enough that data centers are spending billions and billions to make it more dependable,” said Janous. “Maybe there’s a way to avoid all of that.”

Janous then discussed some of the projects Microsoft has been working on. He mentions the Cheyenne data plant, where the company is tapping into methane from a sewage treatment plant. Methane is highly renewable, and a highly available resource. The company is asking itself if landfill gas can scale – can they do it big? Can they do it across the globe? Janous believes the answer is yes, so if Cheyenne is successful, expect it to be implemented in bigger ways.

“We’re going back and thinking more holistically about how we’re using everything around us,” said Janous. “The heat we’re producing is going back into the sewage treatment plant, and it becomes more of a symbiotic system.”

Microsoft is driving efficiencies, but not solely for its own benefit. Janous notes that, because of its scale, it gives the company an opportunity to pursue new avenues, to try new things. But ultimately the goal is to drive efficiency across the industry.  “We’re looking beyond Microsoft when it comes to energy,” said Janous. There a huge amount of investment in renewables, “we hope to have more pilots coming up soon, more concepts,” said Janous. The key is finding cost effective ways to crack the problem. “For example, the price of solar is coming down so fast – that opens up the opportunity. But it still is a little ways off. Finding a cost effective way will crack the problem.”