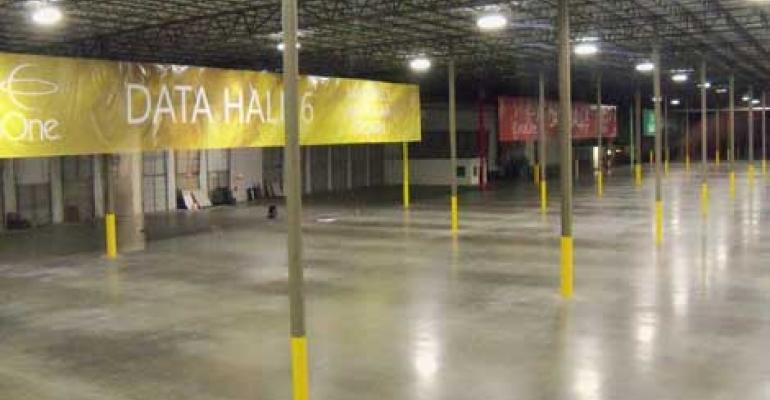 Staffers at CyrusOne use scooters and golf carts to get around the company's new Carrollton, Texas data center. It's a sign of the scale of the company's ambitions in the Dallas market, where the company has just opened its first phase of colocation space. 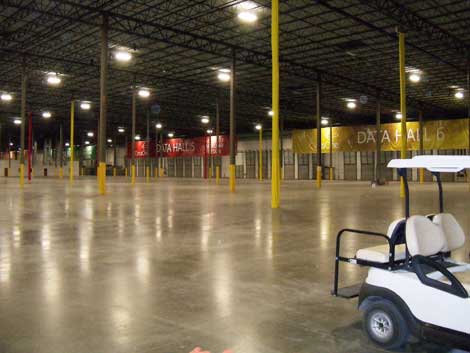 The open space inside CyrusOne's 680,000 square foot facility in Carrollton, Texas, along with one of the golf carts used to transport staff across the vast expanse of space. (Photo: Rich Miller)

CARROLLTON, Texas - If the air is whooshing past your ears inside the data center, it usually means it's time to turn down the airflow from the CRAC units.

But in this case, at the CyrusOne data center north of Dallas, the whooshing noise is from the speed of the HoverBoard scooters that staffers use to zoom across the huge expanse of open space inside the 680,000 square-foot facility.

The need for scooters and a brigade of golf carts is a sign of the scale of CyrusOne ‘s ambitions with the facility in Carrollton, which has just opened its first phase of colocation space. The 47,000 square-foot data hall is the first of six phases planned for the enormous facility. The data hall is housed in the rear of the building, hence the need for speedy transport across the nearly quarter-mile distance to the office space at the front of the building.

Texans like to build big. And perhaps no company knows the Texas market better than CyrusOne, which operates nine data centers at campuses in Houston, Austin, San Antonio and Dallas.

“We feel good about committing to an asset like this when we have a success story in a given market, and we have that in Dallas,” said Kevin Timmons, the CTO of CyrusOne.

The Carrollton data center is the showpiece for Timmons’ “massively modular” approach to design, which seeks to take the scale and advanced design of the largest web-scale data centers and bring them to enterprise customers in a multi-tenant environment.

It’s a large canvas on which to paint. The Carrollton data center is more than 1,428 feet long and 480 feet across. It’s large enough to house six 747 airplanes, four football fields, a dozen space shuttles, or two Washington Monuments. It could eventually support up to 60 megawatts of critical IT load.

CyrusOne has moved quickly to bring the facility online and begin leasing space. It took just 14 weeks from the start of work to commissioning the first phase of the data center. Several customers have already been installed.

It’s been a whirlwind year for CyrusOne, which had its IPO in January and is making a big bet on big campuses. In Phoenix the company has opened the first data center on a new campus designed to house seven facilities and more than 1 million square feet of space. In Houston,CyrusOne has just purchased another 32 acres of land to expand its campus, which is being built around the infrastructure requirements of the oil and gas industry.

And then there’s Dallas, where CyrusOne is rolling out a massive facility in one of the nation’s most competitive markets. The company offers both colocation and wholesale data center suites, and has recently introduced an interconnection offering, allowing it to play on several levels of the complex Dallas market.

CyrusOne isn't alone in its confidence in demand in the Dallas market  One of its major competitors believes that demand for wholesale space continues to outpace supply in Dallas. 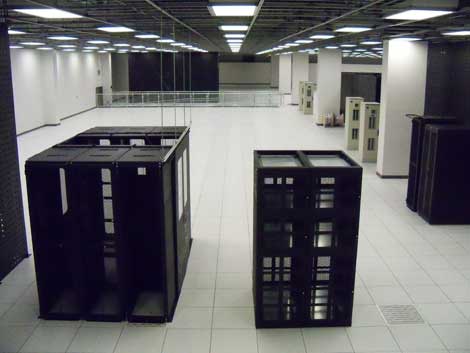 Here's an overhead view of the raised floor area inside the 47,000 square foot first phase of the Carrollton facility. (Photo: Rich Miller)

Digital Realty Trust says it is tracking 25.7 megawatts of demand in the Dallas market, down from 32.6 megawatts last quarter but still more than the 20 megawatts of available wholesale space.

Texas is a stronghold in CyrusOne's customer base. The company leased 41,000 square feet of data center space in the fourth quarter of 2012, with more than half of that activity focused in San Antonio and Houston, the company reported. CyrusOne now has 518 customers, including 115 members of the Fortune 1000.

But Timmons realizes that new facilities in busy markets like Dallas need to find ways to stand out from the crowd.

“My job is pretty much full-time differentiating,” said Timmons. “We’re different because we’re super- efficient and we’re flexible. That’s why we have the amenities.”

For CyrusOne, the enormity of the Carrollton site allows it to achieve economies of scale. The large footprint provides lots of options in how customer space is built and configured. It can accommodate everything from small online retailers to Internet companies seeking “super wholesale” deals for large chunks of space.

In designing the facility, Timmons and his team wanted to dedicate as much of the building’s footprint as possible to data halls. The solution was indirect evaporative cooling, which uses an air-to-air heat exchanger to take advantage of “free cooling” – the use of outside air instead of mechanical refrigeration – but doesn’t expose customer equipment directly to outside air. Timmons estimates this approach should produce up to 4,400 hours annually of free cooling in Dallas, or nearly 50 percent of the year.

On the Efficiency Front, Leading With Cooling

The indirect cooling units can live in the equipment yard outside the building, preservings the interior footprint, which will allow CyrusOne to build out up to 400,000 square feet of technical space. Cool air enters the data hall beneath a 42-inch raised floor, flows through perforated tiles and into the server area. The warm server exhaust air from the hot aisle rises to the upper area of the data hall (which has a 38-foot ceiling), where it is collected in large ducts and returned to the cooling units in the equipment yard.

Future phases have the flexibility to house cooling and power infrastructure in equipment galleys running alongside the data halls, Timmons said.

Then there are staff-friendly amenities. The building features 30,000 square feet of customer office space, a modern cafeteria, a gym area with workout machines, and unique recreation space featuring a climbing wall, circular slide and a putting green.

“Every single market we’re in is growing incredibly fast,” said Timmons. “It’s really nice, from a scalability standpoint, to have a facility you can grow into.”

Even if you need scooters to get around.

Continue to the next page for more photos of the CyrusOne Carrollton data center. 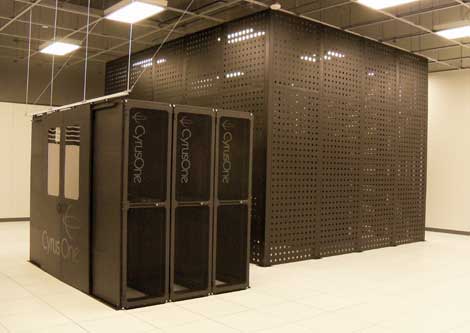 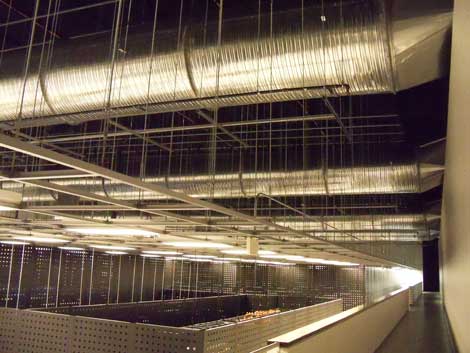 These huge ducts along the ceiling serve as a return plenum for waste heat from the hot aisles, returning it to cooling units outside the data center. (Photo: Rich Miller) 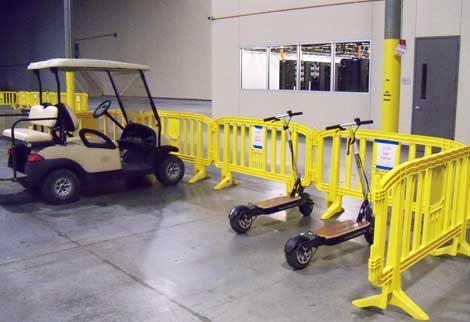 Golf carts and scooters reduce travel time across the data center, which is more than 1,400 feet in length. (Photo: Rich Miller) 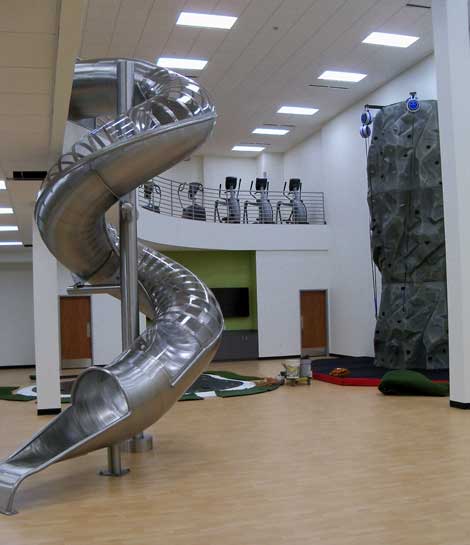 The recreation area at the new CyrusOne data center in Carrollton, Texas features a spiral slide between stories, fitness machines, a rock climbing wall and a putting green. For more, see our story on Worker-Friendly Data Centers. (Photo: Rich Miller)