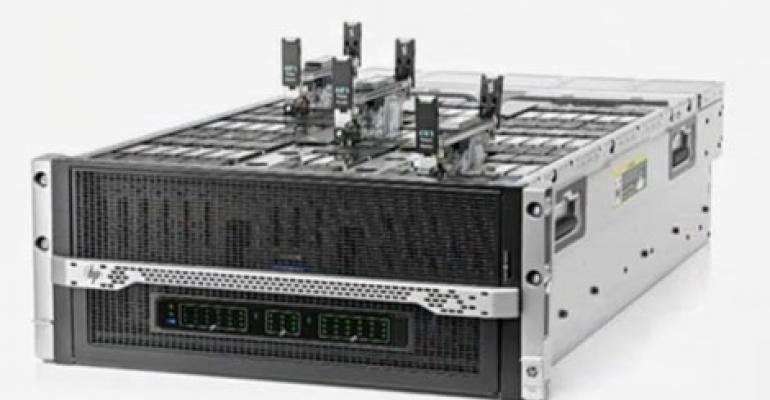 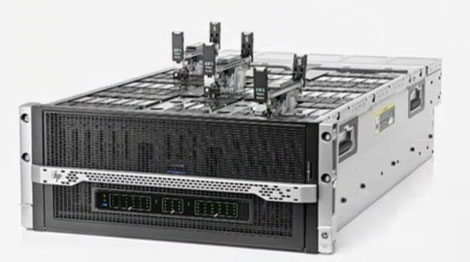 There's been an overall movement toward ultra-low power servers, and Project Moonshot is HP's attempt. HP clearly sees an opportunity in building low-power, many-core servers, which can slash power usage over large footprints of Internet infrastructure.

As CEO Meg Whitman said, "We're living in a period of enormous change. There will be hundreds of billions of devices going to be connected." As the IT world enters the era of the Internet of Things where every device and appliance is connected, creating and storing data, an increasing demand for compute is evolving. " It’s no longer about petabytes, but brontobytes," said Whitman. "And all of this takes a lot of elements in the background. We’re on a path that is not sustainable from a space, cost, and energy perspective."

The HP Moonshot 1500 System chassis is similar to a blade chassis, but on steroids. It is a 4.3U (7.5 inches tall) chassis that hosts 45 independent hot-plug ProLiant Servers, all attached to multiple fabrics.

One moonshot system can get 180 servers in the system, including built-in switches. High-speed uplinks connect all the servers, with 10 terabits per second of I/O. One rack of Moonshots can replace 8 of traditional 1u 2p servers. It uses 89 percent less energy, 80 percent less space, 97 percent less complexity, which leads to 77 percent less cost.

While the first Moonshot version on the market uses Intel processors, additional servers shipping later in 2013 will take chips from multiple partners such as AMD, Calxeda, Applied Micro and Texas instruments.

Project Moonshot represents a new class of server designed to run Internet-scale workloads, and target specific workloads such as those that support gaming, genomics, telecom, video analysis and more.

Client-server infrastructure was not designed to handle the level of computing that Internet-scale organizations are running, according to HP, and that the economics behind social, mobile, cloud and big data will deteriorate.

The company also announced the Pathfinder Innovation Ecosystem: a program focusing on servers for different workloads. There are Internet-scale organizations today operating over one million servers. Additionally, many enterprises in finance have tens of thousands of servers. HP sees the opportunity to market a solution that meets the needs of these kinds of businesses. HP working on how to move large enterprises from a general purpose server, and move to a new era of software-defined server. The future is all about the software-defined server, according to HP. These are servers, which are specifically designed for different workloads and they’re looking to power a range of applications.

HP first revealed it was building such low-power machines in the fall 2011. 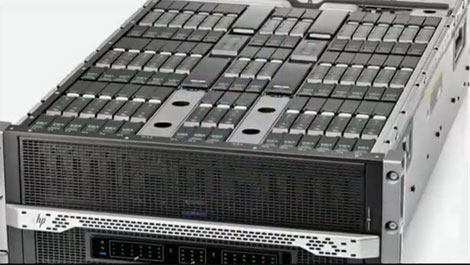 Close up of Moonshot 1500 from HP. The company today rolled out the units which use low-power processors.